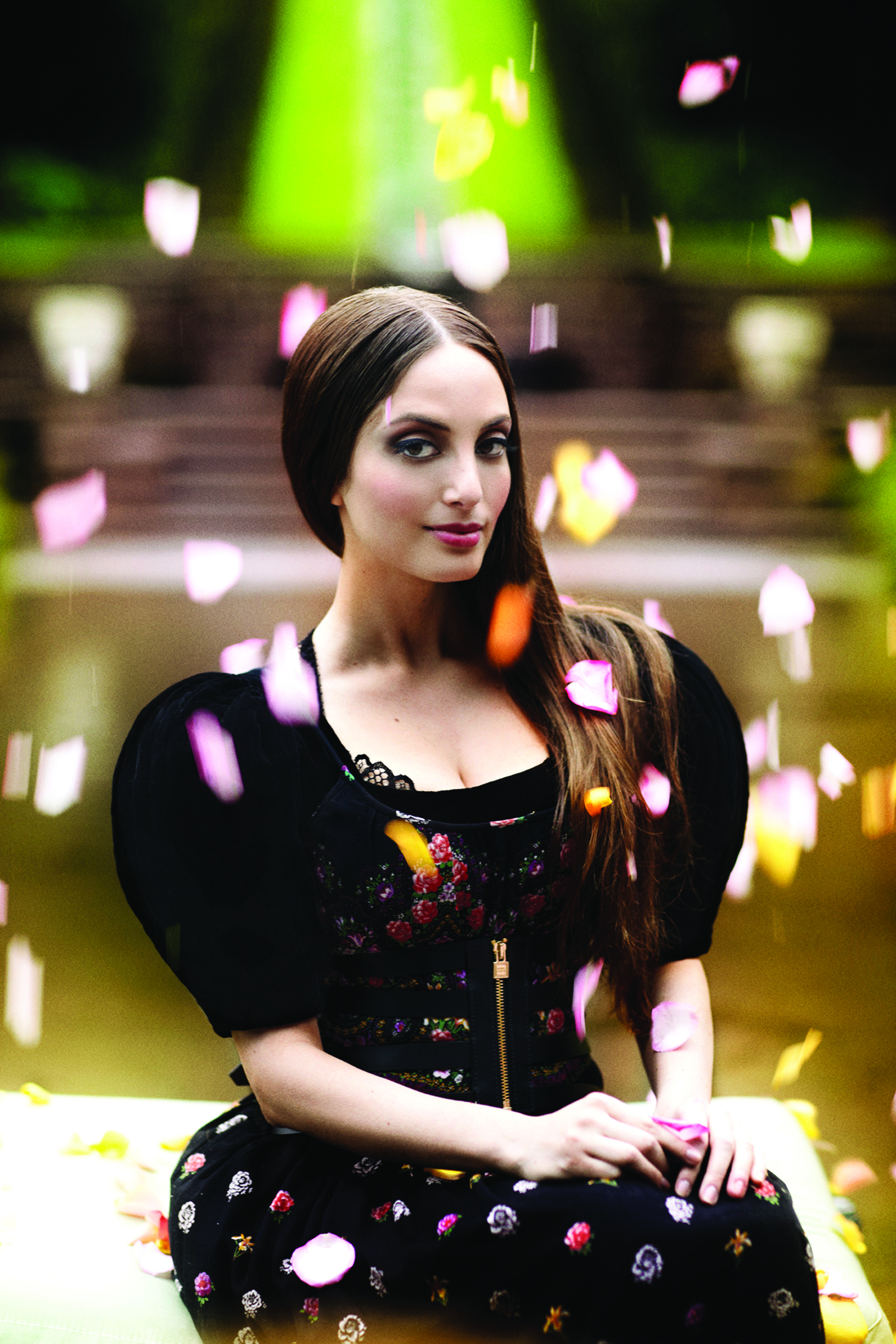 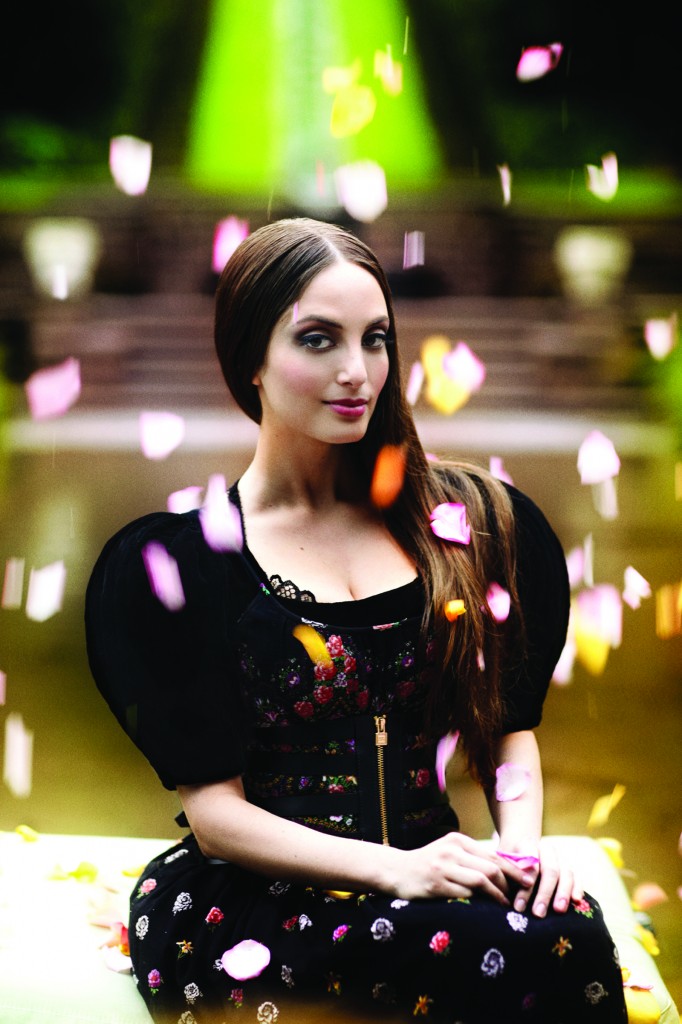 Written by Lizabeth Zindel. I climb the grand stairway to the dressing room where I find Alexa Ray Joel sitting at a vanity. In front of her, windows open to an expansive view of Oyster Bay with sailboats docked amid the fog. I’m introduced to her and then step aside as the stylist brushes makeup on Alexa’s cheeks. During a break in the action, Alexa smiles and holds up a mug with a replica of a woman’s face painted by Fornasetti. She tells me she brought it to be used as a prop. “My mother collects them for me,” she says. “She puts Fornasetti pieces all over my room because she thinks the girls’ faces look like mine.” In that moment, I am struck by the resemblance. The delicate, features. The large, dark eyes.

I comment on a nearby vase filled with roses. Alexa’s eyes light up. “Those are for my hair. I want to be like Persephone, the goddess of flowers,” she says. While Alexa returns to her seat by the window, I think about how she is taking on the role of the goddess of springtime, a season of growth and transformation.

As Alexa finishes getting ready for her first look, she peers out at Oyster Bay. “I love rainy, hazy, misty, foggy days,” she says. “I am a Long Island girl. It’s in my blood. My father is Mr. New York State of Mind. We go out on the boat all the time. Water is a huge inspiration to me. I go to the water when I’m stressed or need to think.” The ocean has even seeped into her subconscious. “I have a lot of water dreams,” she confesses. Alexa tells me about her specific vision for today’s photo shoot. “I want to create a modern, fresh take on classic, sensual, and feminine women,” she says. “I’m drawing inspiration from Persephone, Cleopatra, Anne Boleyn, Frida Kahlo, and Mona Lisa — these women of mystery.”

After hair and makeup are complete, we head downstairs to the music room. I ask her why she is drawn to these iconic figures from different time periods. Is there a part of her that feels she belongs in another century? Alexa tells me: “My parents are very old world, old school people. My father has a rich grasp of history, and he raised me with that. He always played classical music like Chopin and Beethoven. And my mother studied painting in Paris and is an unbelievable artist, so I grew up with a very strong sense of art and aesthetics.”

In an expansive room filled with baby grand pianos, an organ, and a table covered in violins, Alexa takes her mark in front of the two photographers, a husband-and-wife team. She sits on the bench in front of the organ, hugging her knees to her chest and then stands and tickles the keys. “Can we put on classical music?” Alexa asks. “I want to listen to something dark, grand, and regal while embodying these royal and elegant women.” When the photographers know they have the perfect shot, Alexa disappears and then re-emerges in her second look, a white ensemble matched with thigh-high gladiator stilettos. She calls this ensemble, “The Cleopatra,” and tells me the outfit came from her own closet. “When I do a photo shoot, I like to be involved in pulling the clothes. Fashion and style is a huge part of my self-expression,” she says.

The photographers lead Alexa outside to a misty lawn where they snap photos of her dancing around a birdbath. Then Alexa climbs onto a gazebo and poses against columns entwined in vines. As I watch her, I find myself wondering what it was like coming into the world with Billy Joel and Christie Brinkley as her mother and father.

Inside from the rain, Alexa tells me about growing up with her parents in the Hamptons on Further Lane. “I have such memories of them together there. I remember going with my mother to Dressen’s and eating cinnamon doughnuts.” Alexa reminisces about being a little girl and putting on musicals with her parents in their home. “My mom had a drama wig and makeup shop in the house, and my dad would play back-up music while I sang. I didn’t know they were the big shots and the stars, because in that home I was the star. They paid so much attention to me.”

As nurturing as her parents were and are, Alexa says she puts pressure on herself to live up to huge expectations. “I’m a perfectionist. I’m very hard on myself, and I was painfully shy growing up. I was terrified of going to events with them and getting my picture taken. I was not comfortable in the spotlight.”

But as the daughter of two of America’s icons, Alexa could not avoid the public’s attention. She says: “The media was a little rough on me. They used to pick on my looks, and I used to care too much about how they perceived me.”

I ask her what she thinks of our society’s unrealistic expectations of beauty. “My mom and I talk about it all the time. My mom asks, ‘Why is my age and how many marriages I’ve had always listed before my accomplishments? But with men, they list their accomplishments first.’”

Alexa tells me that as a young girl she wasn’t image-conscious. “I used to not care. I’d throw on any dress. And I was given a very hard time for it. Perez Hilton labeled me a slut. I was 19 when he called me that, and it was hard. I didn’t perform my own music for a while. I know what it feels like to be bullied, as well as to be bullied by the media on a very large scale.”

I asked her if she has any advice for kids who may be getting bullied at school. Alexa responds, “My father always said at the end of his shows, ‘Don’t take any shit from anybody.’ I believe in expressing yourself and standing up for your beliefs.” It’s late in the afternoon and time for Alexa to transform into her final costume. She heads back upstairs to slip into a floral, velvet dress and add roses to her hair. She tells me: “I used to care too much about what other people thought of me. Do they take me seriously? But in order for me to recreate myself, I can’t let them get to me anymore. Now is a time when I’m starting over. It’s a reboot. It’s a rebirth. I’m finally embracing myself. I no longer feel like I’m hiding in the shadows of my parents or afraid to be who I am.”

Alexa goes on to address the media’s claim that she had recent plastic surgery. “I want to make it clear that this makeover is not a transformation made out of plastic. I am a genuinely late bloomer. I was a shy girl, and being a child of celebrities put me in a vulnerable position. I did have my nose done, but that’s all, and that was a while ago.” Alexa tells me that she chose to be open about that procedure because she wants to make other girls who have made that decision for themselves feel comfortable. “I want them to know it’s not anything to be ashamed about,” Alexa says.

I ask Alexa what she has done to become more comfortable in the limelight. She credits performing her music at big events like the New Orleans Jazz Fest and interviewing designers during Fashion Week for JuliB.com. She says: “It’s a constant battle. I still wonder how to assert my own identity and artistic vision not just musically, but personalitywise, too.”

When we talk about her future, Alexa lights up when she speaks about her volunteer work with her local animal shelter and Save Sag Harbor, a charity that works to keep family run businesses open. She also says: “I would love to write a novel about what it’s like to be a woman who was a late bloomer. I also want to keep playing my music at iconic New York venues like The Oak Room — and maybe one day, The Garden.” Alexa uses her songwriting to process her emotions. “I’ve written songs about the media and their perception of me or my parents. I wrote a song in defense of my mother, called ‘Now It’s Gone,’ that was aimed at her ex-husband Peter Cook, because obviously I was very protective of my mother about that betrayal. I also had a public breakup. I was heartbroken and that defiantly inspired me to write music to grieve that lost love. I also write music to celebrate love and to celebrate life.”

Now it’s time to move back downstairs for the final photos of the day. Alexa poses before a waterfall looking at her reflection in a handheld mirror. “This look is Frida Kahlo meets Anne Boleyn and Mona Lisa,” Alexa says. Inspired by Leonardo’s masterpiece, she adds, “I am trying to do that slight kind of grin.” The photographer tells her, “Smile like you have a little secret. ” She does and for the final few shots, the production team gathers and showers Alexa in rose petals.

As we head back upstairs, I ask Alexa: “For this photo shoot, you told me you want to embody women of mystery. What is one of your mysteries? What is something you hold inside that you wish the world knew?”

Alexa pauses for a moment and then she says: “I’m just like any other human being who wants to be valued and appreciated and wants to be able to connect to the world in my own way. I do not want to be known forever as the rock ’n’ roll offspring. I have my own voice and my own piano playing, singing, art, writing, poetry, and heart that I want to contribute to the world. I just want to be heard for me. My beauty is very different from my mother’s. My music is very different from my father’s. And I just would like people to have an open mind. I think that’s really a secret that makes me vulnerable and that I haven’t really expressed to people.”