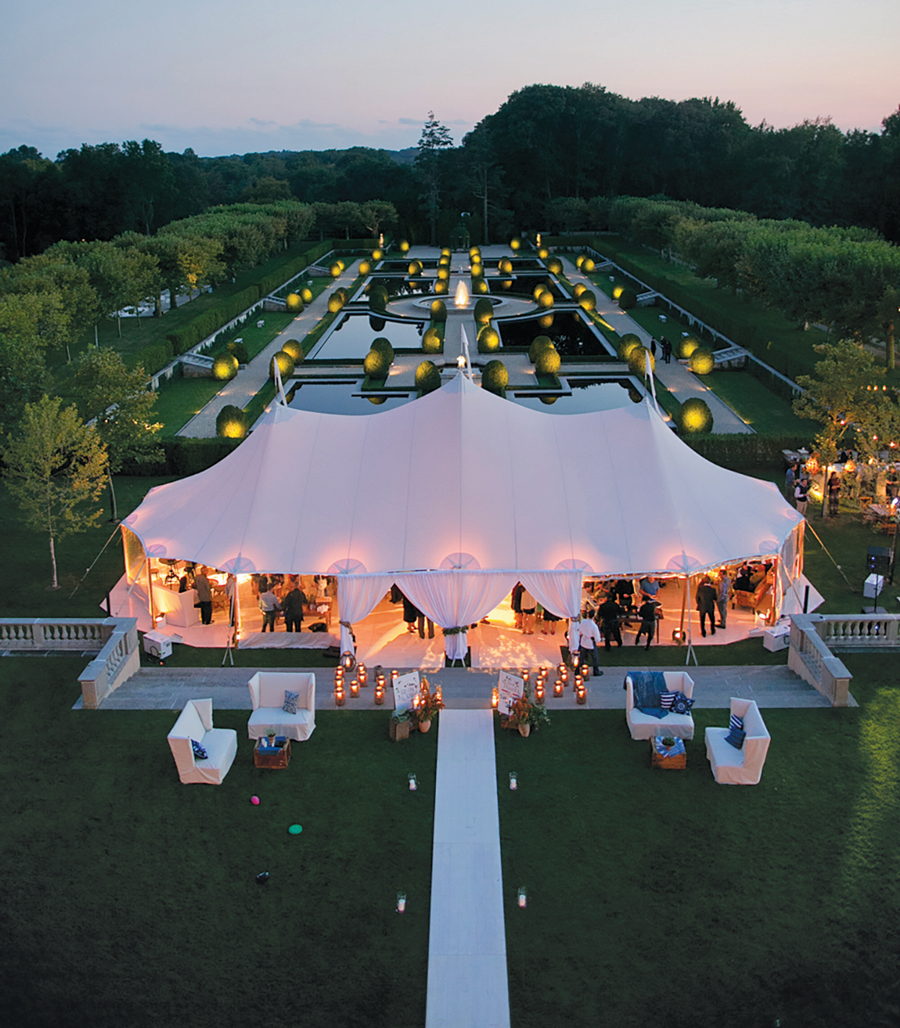 The Only Way to Tent in the Hamptons

In early spring 2006, Steve Clarke took a road trip to Marion, Massachusetts, to meet with the tent makers Tim and Matt Sperry. Steve wanted to learn more about their tent making because he was impressed by the quality and craftsmanship of Sperry tents as well as their innovative and classic design. Soon after, Steve took a leap of faith and founded Sperry Tents Hamptons, a distribution company for Sperry Tents in New England.
Sperry Tents Hamptons quickly grew, and Steve found the need to expand his staff. Diane Valentine was brought on eight years ago to help with sales and customer service, specializing in events on the North Fork, which is where she calls home. A few years later, Noah Saxton joined the team to manage the warehouse and all production crews, which total up to 60 during the summer. In more recent years, Brittany Gold and Donny Dodd were recruited to help with production and managing the office.
The Sperry team’s attention to detail and emphasis on customer service are key reasons why Sperry Tents Hamptons has become the go-to company for weddings and private events in the Hamptons. 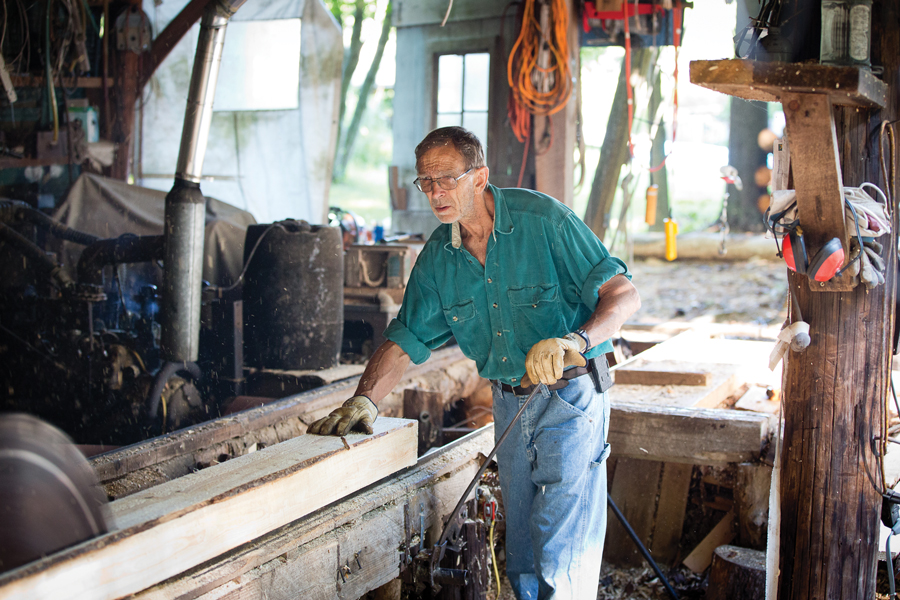 Is there really that much of a difference among tent-rental companies?
Yes! There is a huge quality difference among rental tents, and it’s important to know exactly what you are choosing before you sign on the dotted line and your event photographer shows up.

Are Sperry Tent canopies crafted from genuine sailcloth?
The Sperry family designed and built the first-ever sailcloth tent. Why sailcloth? Because the Sperry Tents founder, Steve Sperry, was a sailmaker, and when he decided to make a party tent one day, he used the materials he had on hand in his sail loft in Marion, Massachusetts. A man of many talents, he also made the new tent’s wooden support poles, using the sawmill on his coastal property. To this day, he still mills each and every Sperry center pole himself (in his seventies!).

What’s so great about sailcloth?
Standard-frame tents — the kind you see at festivals or trade shows — typically have vinyl canopies and aluminum frames. Even other tent rental companies’ supposed sailcloth tent is still made from thin vinyl.
Unlike vinyl, which has a telltale sheen, chemical scent, and the potential for imperfect, factory-made seams, Sperry Tents’ durable sailcloth is ivory — not stark white, breathable, crisp, translucent to sunlight, and also translucent to event lighting at night, producing the trademark #sperryglow.

Why are Sperry Tents more expensive than other tent options?
Because each one is handmade by the crew at Sperry Fabric Architecture, a small company in coastal Massachusetts, led by the company president, Matt Sperry. SFA’s dedicated craftspeople are all local and specially trained. Its warehouse is not a warehouse at all, but a solar-fed, environmentally friendly post-and-beam barn. SFA’s small-batch output means a higher priced tent with superior details and aesthetics. 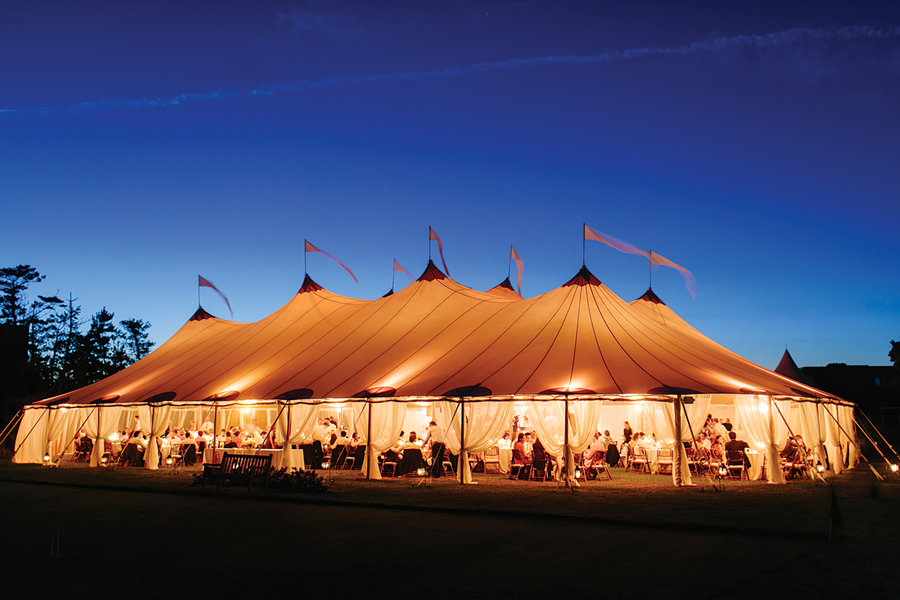 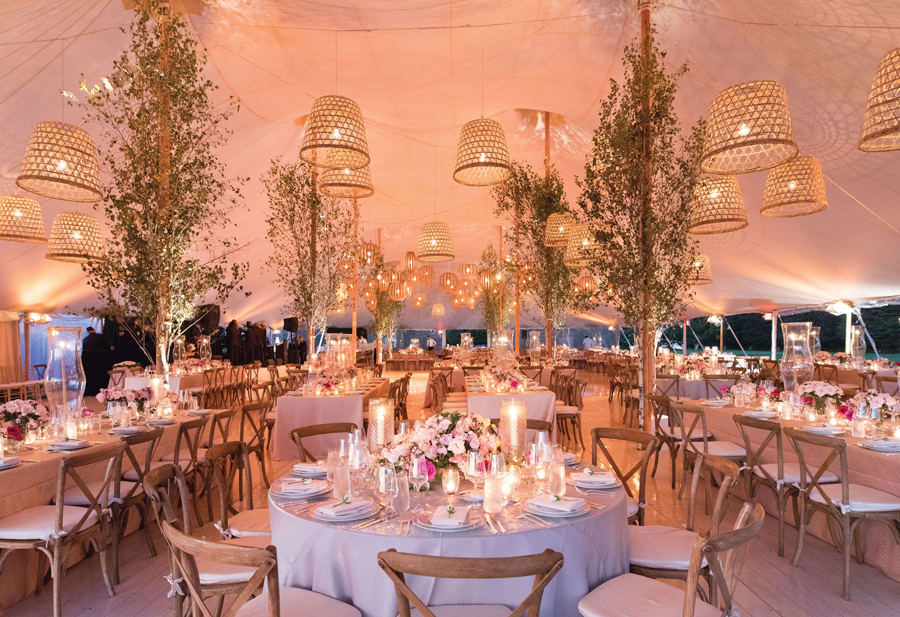