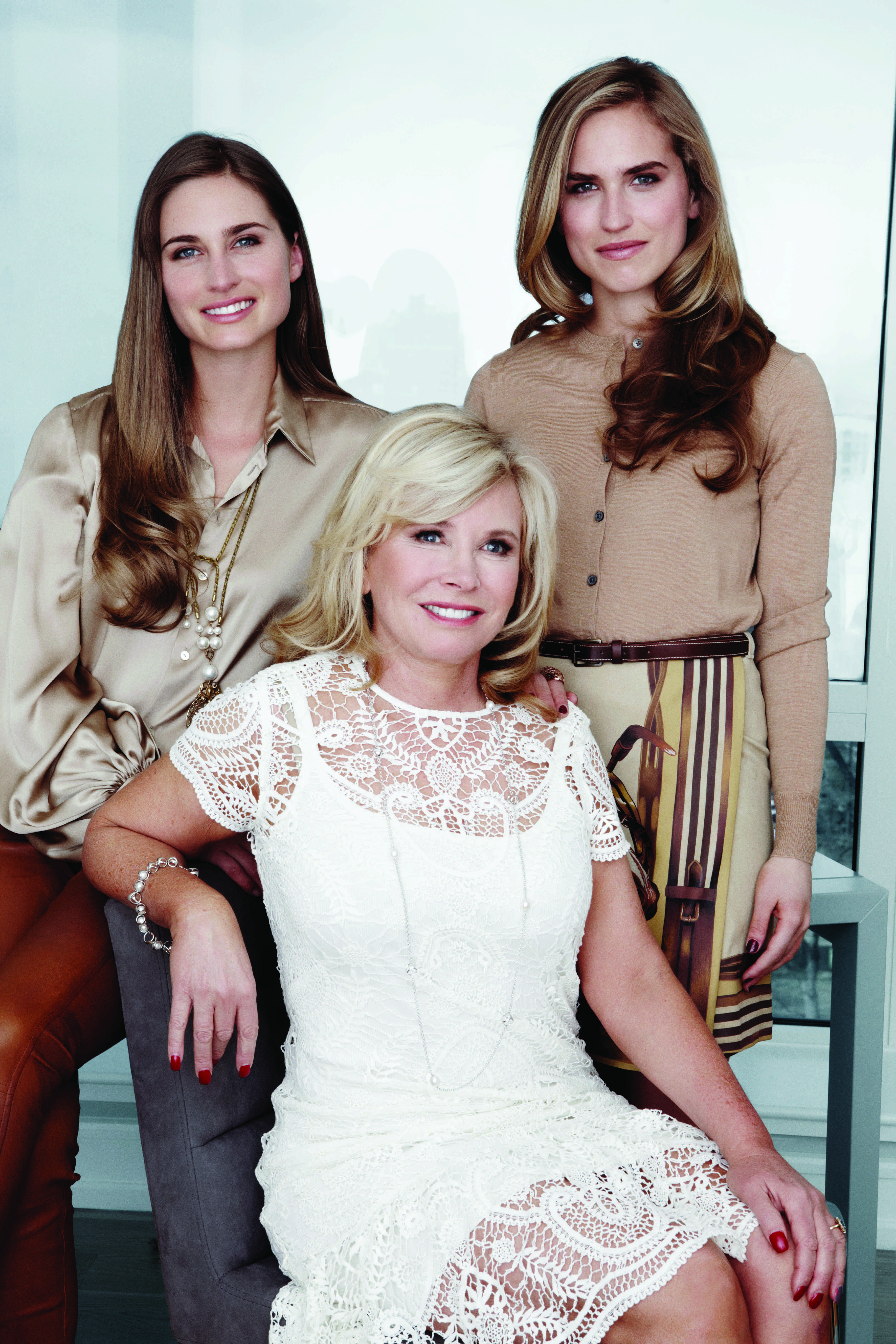 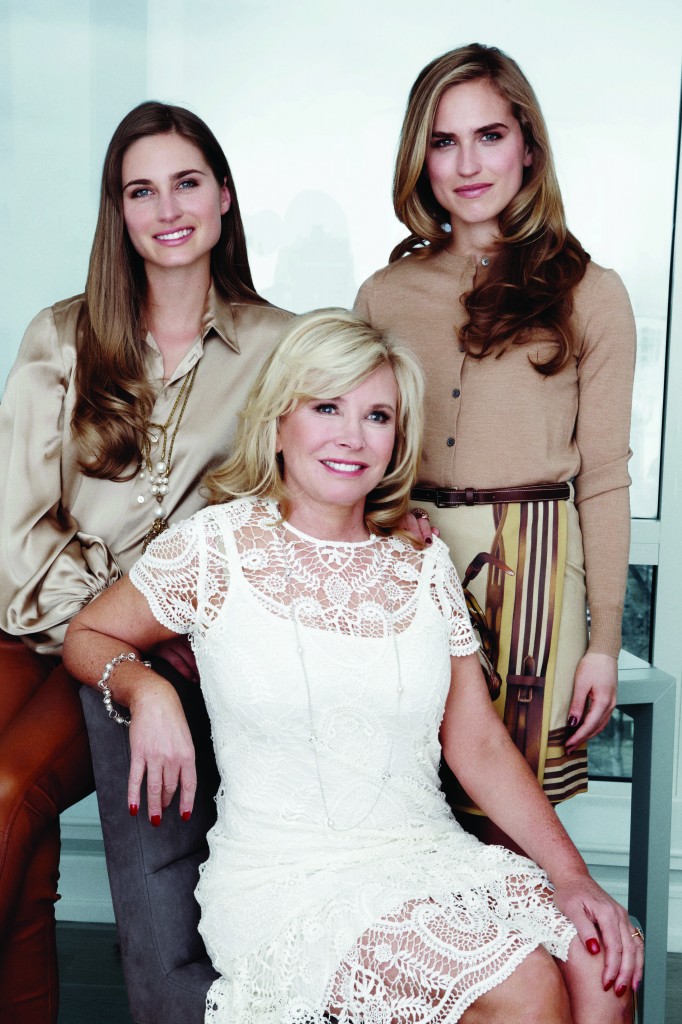 Written by Devorah Rose. At noon on a clear summer’s day, the penthouse at One Museum Mile on Fifth Avenue is all algow. Glints of sun move through a lattice vase, freckling the floor; honey beams of light glide over the bamboo shelves, along the polished marble tops, and shine on a cluster of exquisite orchids, casting half moon shadows.

The room is beautifully precise, but the three women sitting here are a source of easy warmth with their spontaneous chatting and ready smiles. Three blue-eyed beauties, one flaxen-haired and two with honey-brown tresses, wear clothes as unassuming as their manner. Lauren and Ashley, without planning it, both have on casual striped tops and jeans. Sharon, their mother, looks chicly casual, with only a touch of makeup. They sit together, getting their hair done like three schoolgirls at a sleepover, sharing notes on life and mixing in a generous amount of laughter. When a hairstylist comments on the beautiful view of the park, Sharon quickly chimes in, “Lauren and her husband recently spent an afternoon rollerblading through it.” And in that moment you know a lot about Sharon: Her children are foremost on her mind; she sees them even in the details of the city.

It is no surprise, then, that Sharon was recently honored with a Mother of the Year Award from Hale House, a nonprofit organization that helps ensure brighter futures for at-risk children and their families. Clara Hale, a 20th-century humanitarian who received more than 375 awards and 15 honorary degrees in her lifetime, epitomized the goodness and healing energy of motherhood. Sharon recalls the night she received her own award: “The Mother Hale award was a very memorable award and special evening for me, for many reasons. First, I was an inner-city elementary school teacher. I have always tried to live my life by helping children, especially the most vulnerable, either by teaching them or raising funds for them. When my three children were small, I started a national non-profit company, Karitas, that sold children’s toys and clothing. All of the profits raised from these sales went to shelters that cared for homeless and abused children.” One of the most important aspects of the cherished evening for Sharon was the fact that her three children — Lauren, Ashley, and Pierce — presented her with the award. They spoke about the morals and empathy Sharon instilled in them at a young age by urging them to be involved in their community, specifically to give back through meaningful acts of goodwill. Sharon adds, “I so admire women like Mother Hale. She had dedicated her life to helping the neediest children in New York City. She was truly giving and amazing! So I was very touched to be associated with her name and her great mission that lives on today.”

By fostering empathy and goodwill in her children, Sharon planted the seed that has bloomed into the benevolent acts of her children. During our cover shoot, Ashley had to leave the set early for a tutoring appointment. Before leaving, she tells us, “I don’t want to be late because it’s important to me that the woman I tutor knows I value our time.” Sharon, a proud mother, adds, “Ashley works with women who have been abused or in domestically volatile relationships who are getting back on their feet.” There is no doubt that Ashley’s motivation is selfless. She tells us, “Every Tuesday morning, I tutor an amazing woman who is a part of the Sanctuary for Families program, an organization that provides assistance to domestic-violence victims. She is studying for the GED to get out of her situation, and honestly has one of the most spirited energies. She inspires me.” And of course, the model for Ashley’s choices is her mother. Ashley says: “My mom has taught me to stand out and be proud of it. She has encouraged me every step of the way and is always there when I am feeling discouraged and need a little lift. I love storytelling. Life is confusing, and storytelling allows us perspective and preservation. And that leads me to what I am working on now. I am in production on a documentary about a colorful subculture in the South, mainly following an 87-year-old dress designer who brings fantasy to the small town of Tyler, Texas.”

But Ashley isn’t Sharon’s only generous daughter. Sharon and daughter Lauren started Teddy Share Bears, a nonprofit that sells teddy bears to raise funds for children’s causes around the world. Lauren Bush Lauren is a woman on a mission. Her philanthropic venture, FEED, has changed the world. The iconic FEED bag is ubiquitous throughout the world, from red carpets to people on the street. Every bag sold raises funds for food. FEED Foundation, which works hand-in-hand with FEED Projects, has provided 60 million nutritious school meals to underprivileged kids around the globe. “FEED is my No. 1 focus,” Lauren says. “I started FEED six years ago with the mission to create good products that help feed the world. I traveled the world with the UN World Food Programme in college. During those travels, I was able to see and learn about hunger and food insecurity that approximately 870 million people around the world live with every day, not knowing where their next meal is coming from. I was inspired to do more and create a way for others to give back and get involved in the fight to end world hunger. So I thought of the idea for the first FEED bags as an easy and tangible way for consumers to give back and help give meals to kids in need.”

Lauren hopes to inspire others to give back and has advice for the younger generation of philanthropists. “When I started FEED,” she says, “I did not know much about running a social business or producing and selling consumer goods. So much of what I know today I have learned from doing. There have been many challenges along the way, especially because the model of a social business is a new one. But throughout it all, I have stayed true to my vision and continued to grow and evolve FEED. My advice for anyone trying to start a nonprofit or a foundation is to believe in your idea and vision, but also to be open to learning and evolving as you go. I believe it is important to find something that truly moves you. For me, I was lucky to have that early experience of traveling with WFP, through which I became very passionate about hunger issues. And I would also say that there are many ways to get involved in giving back. The world is more open than ever to new models of doing philanthropy. To serve a purpose or mission greater than oneself is the greatest reward. It gives life meaning, so I personally feel very grateful to have incorporated giving into my everyday work and life.”

When it comes to paying it forward, Ashley agrees: “Giving back is one of the most fulfilling and meaningful life experiences. I don’t think it is an option to give back, I think it is a citizen’s responsibility to give back and to be a part of something bigger than oneself.”

These strong young women, brimming with life and generosity for changing the world, are still their mother’s daughters. They enjoy low-key time with this woman whom they love and who has molded their lives. Lauren says: “When we spend time together, we generally like doing something active like bike riding. Just a few weekends ago, my mom and I did the five borough, 40-mile bike ride with my husband, David.” Ashley chimes in about a favorite memory. She recalls the time they traveled to Spain to drop Lauren off for a summer program. “We had many mishaps such as taking the wrong train, not knowing an inch of Spanish, and finding ourselves in the middle of a moving parade. We laughed the whole trip!” Sharon, Lauren, and Ashley are as family-oriented as they are worldly, as giving as they are humble, doing what feels right and inspiring all those around them.