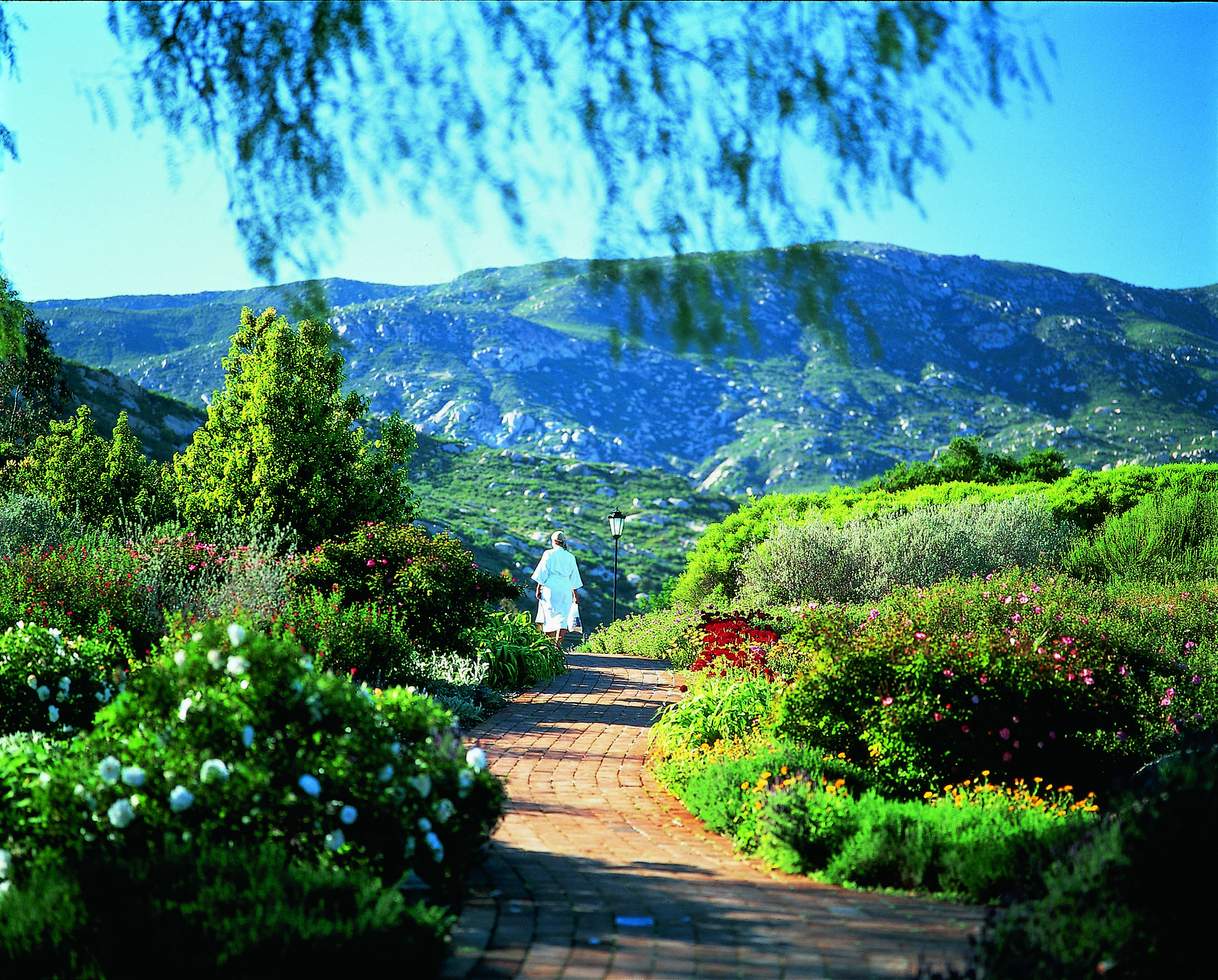 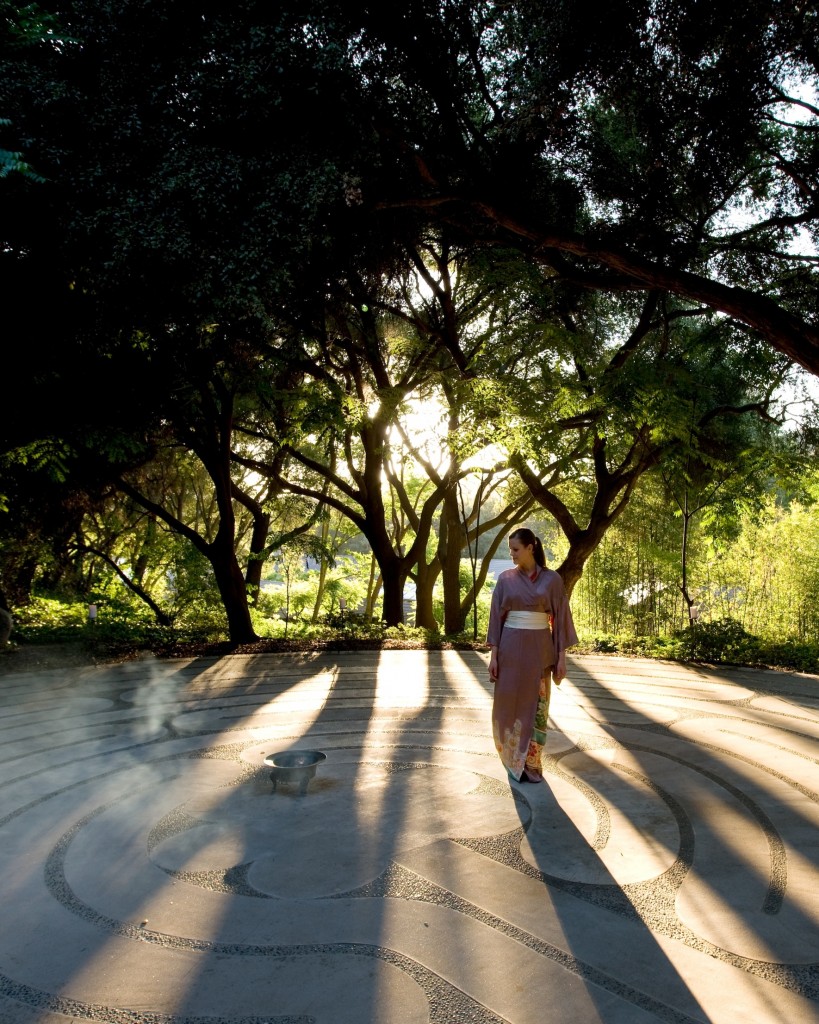 Rancho la Puerta has consistently been hailed as one of the top spas on the planet by celebrities, travel writers and seekers of a healthier life style since it was founded by Edmond & Deborah Szekely in 1940. Located 45 miles from San Diego in bucolic Tecate, Mexico, it is the oldest spa in North America. In 2010 and 2011 Travel and Leisure Magazine proclaimed Rancho la Puerta the “World’s Best Destination Spa.” What began as a tiny camp built in the shadow of historic Mt. Kuchumaa is now a luxurious, state of the art resort nestled amidst lush flora and vegetable gardens created by Deborah’s daughter, landscape designer Sarah Szekely Brightwood. The vast ranch’s fields of yellow black-eyed Susans, cactus patches, endless beds of white irises, orange lilies and red roses that line the winding brick paths, vineyards and koi ponds are breathtaking.  Nicknamed “Rancho“ by the procession of returning guests, it limits itself to 140 people a week. (rancholapuerta.com)

Deborah Szekely is now an indefatigable and spritely 91-year-old example of healthy living. She continues to lecture weekly at Rancho and the iconic Golden Door, the exclusive spa she founded in Escondido, California in 1958 and of which she remains the Creative Director. “The Door” is an intimate compound that caters to only 40 clients at a time and is priced at $7, 850 for a weeks stay. Barbra Streisand, Donald Trump, Nancy Regan, Rita Wilson, Cher, Elizabeth Taylor and Ava & Zsa Zsa Gabor have all been here. (goldendoor.com) Deborah is a widely referred to by the media as “The Mother of the Modern Spa Movement” and is one of the country’s leading wellness crusaders, “Delight in the little things in nature and in life—I think it’s hard to be truly healthy without that. Thinking out of the box, seeing, being aware and enjoying the little things, this is what is so important.”

Later this month, the non-profit advocacy organization Szekely launched in 2012, Wellness Warrior goes public. “Connecting people is my specialty,” says Szekely about Wellness Warrior (wellnesswarrior.org) which aims to “educate, advocate, and organize” people to better the country’s health by eliminating toxins from the food, environment, and consumer products; promote wellness education; and make healthy food both affordable and accessible. “All the different non-profits I created have to do with connecting people because then you get strength. It’s very nice to be powerful individually, but if you can bring people together it’s lasting.”

Szekely’s pioneering fitness and health spa in Mexico was discovered in the 1940s by Hollywood luminaries such as Burt Lancaster, Kim Novak, Bill Holden and the writer Aldous Huxley. Today, Rancho la Puerta attracts Kate Winslet, Madonna, Governor Jerry Brown and his wife Anne, Arianna Huffington, Claudia Schiffer, Bill Moyers, Alicia Silverstone, Erica Jong, Oprah Winfrey and Ricki Lake who utilized the resorts Bar Method classes to train for her appearance on Dancing with the Stars. There are also weeklong schedules of Pilates, yoga, Tai Chi, art lessons, meditation, and cooking classes by renowned visiting chefs.  It’s here in part, Deborah’s hoping to encourage the next generation of “health nuts”—a favorite descriptor for people like herself who “read labels, go to farmer’s markets, participate in a community garden or has a garden, and are active in taking responsibility for their own health.”

Born in Far Rockaway Beach, Brooklyn, Szekely’s fascination with beautiful landscapes was developed at an early age when her family moved to Tahiti during the early 1930s to escape the Depression. “We were the only Americans on the island other than the governor who had two boys,” she remembers. Her mother, Rebecca Shainman, was the Vice President of the New York Vegetarian Society in 1926 and set the family’s course for healthful eating. “In those days they called it ‘fruitarian’ because we ate everything raw.”

Szekely met her husband, Edmond, just after finishing high school and the couple married when she was 17. “He had never bought a train ticket, he never learned to type, he never learned to drive because he said that it interfered with the life of the mind. He was totally impractical but marvelous and charismatic,” she says of their first meeting in Guadalajara, Mexico when Edmond, the head of the British International Health and Education Center in Surrey, England, was on leave to write two books on Mexico.  “Everybody thought he was wonderful so I thought he was too. The minute he walked into a room, some way or another the energy of the room changed.”

Together the couple opened Rancho La Puerta which today runs  $3,000 a person per week; however their first summer health camp in Tecate was decidedly more humble—$17.50 per week and bring your own tent. “It was years before we could buy property and it was little by little by little that we assembled the land,” she says of Rancho’s property that now spans 3,000 acres—2,000 of which can never be developed and includes the famed Mt. Kuchumaa, where Szekely’s late husband and son, Alex, are now buried. “When we got here, we heard some weird stories that it’s a sacred mountain and my husband said, ‘Oh, it’s just folklore,’ but after we’d been here a few years, they had a major pow-wow on the mountain and tribes came from all over the United States. I know that we’re here because we were meant to be here. I really believe that and the reason Rancho la Puerta and Golden Door are so successful is because we’re on the path that we’re supposed to be on.”

The lessons taught at the spas on how to lead a healthful, mindful life, Szekely has been trying to teach beyond the San Diego region over the last several decades. She wrote the Congressional Management Manual, now in its 13th edition, that is used by all new members of Congress on how to transition into their new role. She’s run for Congress herself and lobbied for issues popular with the “health nuts,” such as taxing sodas and soft drinks and lowering subsidies on unhealthy foods. And she created Living Skills, an elementary school curriculum to teach students about obesity prevention.

Now in her ninth decade, Szekely is today setting up programs to ensure her mindful message lives on. Rancho La Puerta is now under the direction of her daughter, Sarah Livia Brightwood, and she is building a Super PAC to further encourage wellness legislation and strengthen the current Farm Bill. “I want people in Congress to look at the alternatives before they make their decisions and where they lead to and what it’ll be like in 10 years, 20 years,” advises Szekely. “They’re making decisions for us that, for the moment, sound good. But then where are they going to go? I’m building for the future.”

Yet with all her ambition and vigor, Szekely is realist, if not decidedly determined, about that future. “I’m not going to say I’m going to do this for the next five or 10 years because I’m 91 and I’d be an idiot,” she laughs. “I’m trying to build something for the wellness people. I want the wellness establishment to have a strong voice.”