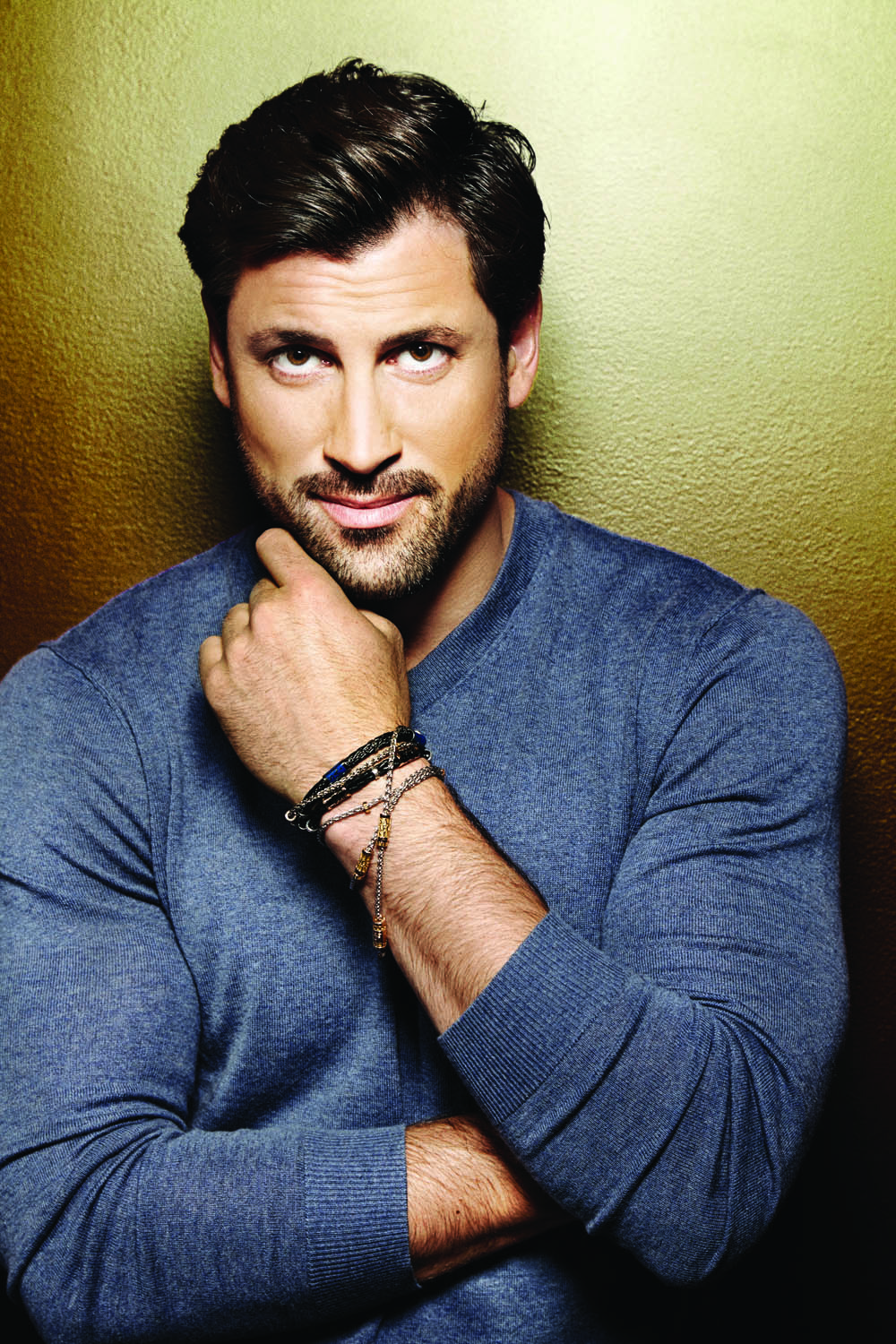 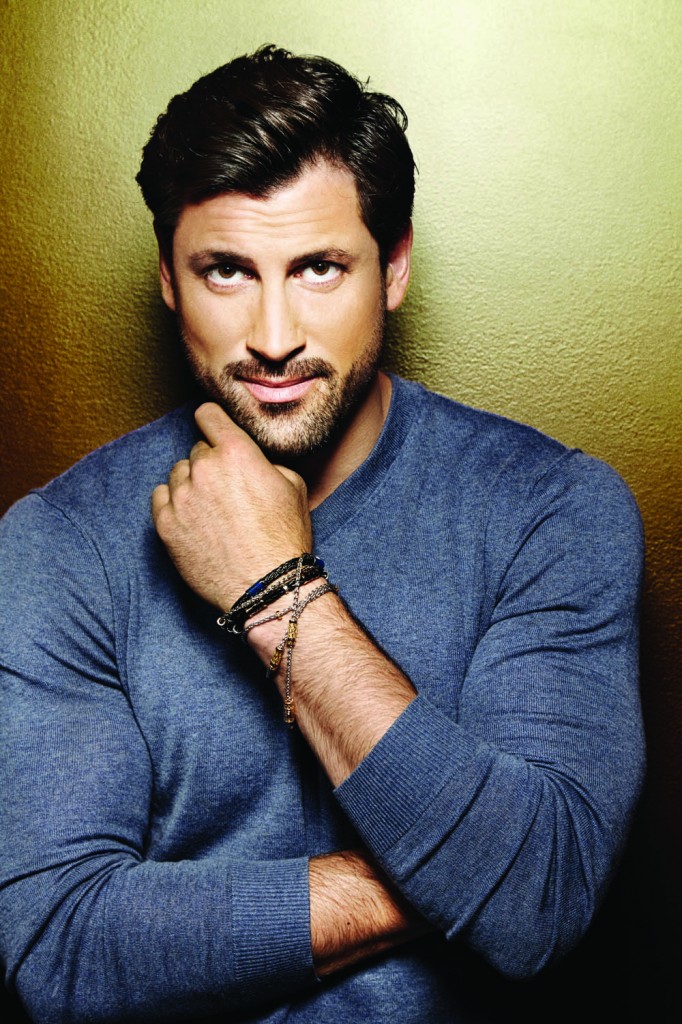 It’s a beautiful evening in Los Angeles. The ambiance is enchanting inside the luxurious Sofitel. I’m seated in the modish lounge just outside the hotel’s French-Mediterranean restaurant. As I quickly glance around the room, I become intrigued by the unique ensemble of hotel staff and European guests nearby. In the distance I see Maksim Chmerkovskiy walking toward me. Dressed in grey pants and a short sleeved shirt, he smiles as he approaches. I stand to greet him and he graciously gives me a warm embrace and kisses me hello.

It’s the day after Dancing With the Stars’ live TV broadcast. Maksim, known for being a professional dancer on the ABC hit show for nearly a decade, appears relaxed after a long day of rehearsal. I invite Maksim to join me for dinner. “Absolutely, I’m starving,” he answers. As we head over to the hotel’s ultra chic restaurant, Estérel, I can’t help but notice Maksim’s peaceful and happy demeanor. I sense that this month is a defining moment in his career, and his positive energy gives me the impression he is about to embark on a new chapter of his evolving celebrity.

After leaving the dance floor for a two-season hiatus, Maksim returned to Dancing With the Stars in March for the show’s 18th season. Paired with Olympic ice-dancing gold medalist Meryl Davis, the couple’s chemistry was mesmerizing and the pair immediately became fan favorites. Finally, after enduring 10 weeks of fierce competition, the couple deservedly won the mirror ball trophy.

As Maksim and I approach the entrance to Estérel, he tells me what his experience was like on Dancing With the Stars this season. “When I returned to the show, I thought to myself that I am not going to win,” he says. “I am just going to do my job. I wasn’t really expecting anything. When Meryl walked into the room, I felt like it was a mistake. I never thought she would be my partner. I had just watched her compete and win the gold medal for ice dancing at the winter Olympics. It was at that moment that I realized it was the best decision I made to come back to the show.”

Inside the elegant restaurant, the hostess seats us next to each other in a cozy booth by the outdoor patio. Maksim takes a sip of his white wine, then turns to me and explains: “This is the first season that everyone is so happy to be together, and it’s awesome. ABC made changes to give the show a younger vibe. The dancing professionals don’t really hang out with each other that much. I like to keep separate from the group. I am not a loner; I just don’t like to share too much of me.”

Maksim’s voice reveals his increased contentment and refinement. He has weathered stormy seasons in the past, having been paired with difficult dancing partners. I ask what it was like when he didn’t have chemistry with a partner. Maksim tells me that he had partners whom he “had to metaphorically drag kicking and screaming to the finals.” He adds: “They really should have been eliminated in previous episodes. It was extremely difficult for some of my partners. I look at it from the perspective that three months on DWTS is a long time and I am not willing to waste it on someone. I try to find something good in all of my partners every season. The professional dancers get paired with the stars mostly by personality match. I play a particular character on the show. I create a lot of drama; therefore, I was paired with very dramatic stars who would fight back.”

I comment on the undeniable chemistry he shares with Meryl this season. Because of the physical nature of partnership dancing, I ask Maksim if he develops intimate relationships with his partners. “Do you know what a showmance is? It is like being at a summer camp when you’re a teenager,” he explains. “You spend summertime away from your home. When you spend three months very closely with someone at a particular place it is like a summer love. You have no choice but to get involved with that person. I am very close with a few of my past partners because they have played a huge role in a big part of my life. Three months is a long time, and if I am going to give someone that much of my time, I am going to develop a relationship with that person.”

I take a moment to reflect on Maksim’s candidness, then I ask why he returned to Dancing With the Stars. He looks up from his menu and answers: “I came back to the show because it was partly a circumstantial situation where I was required to do certain things, and the other part of it was personal. My grandmother came to see me perform six times on Broadway in Forever Tango. When I asked her why she kept coming back to the show, she told me she didn’t know if it would be the last time she saw me dance. Her words resonated with me. I thought to myself, ‘I am an idiot.’ I realized I am still young, healthy, and energetic. There may be a time when I won’t be able to do the show. I never thought I would say this, but I missed the show so much.”

Maksim goes on to tell me what his experience was like dancing on Broadway’s Forever Tango with ex-fiancé, Karina Smirnoff. “Working with Karina was amazing. Spending seven weeks dancing the tango with Karina was explosive and hot like our relationship. It was so passionate that at the end of the show, Karina would cry. Karina is a strong woman and nothing makes her cry. She is a tough girl, a phenomenal dancer, and an incredible business woman.”

As the waiter politely interrupts us to take our order, Maksim interjects, “The flat bread is amazing!” He lifts the bread basket and encourages me to try some. Maksim orders his dinner and another glass of wine and hands the waiter his menu. He leans towards me and confesses: “This season is like no other. I know I can be very intense. When something needs to be done, I assume that the requirement needs to be done on a very high level. That’s where I realized I am wrong. If my partner can only give me fifty percent and doesn’t do a great job, I realized then that is okay too. I really have the best intentions for my dancing partners. I understand now that it is unnecessary to be so demanding. It’s just my passion for wanting to get the best out of them, and that is why I got so intense with them.” I ask Maksim what he will do when he finally leaves the show. “I want to pursue acting,” he replies. “I think it’s very rewarding, and it is a different form of art. Last year I met this amazing acting coach in Los Angeles. I took a lot of acting lessons. Acting is such a therapeutic experience. It is also very difficult. I was never a child actor; therefore, I want to learn the right way by taking classes. Acting lessons really helped me this season. It is really cool.”

When our food is served, Maksim graciously offers to share his oysters and shrimp with me.  We talk about his future while we eat our dinners. “I have a lot of work to do in Los Angeles after the season,” he says.  “In addition to pursuing an acting career, I have also created my own jewelry collection. It is a men’s line that I launched for the brand Cantamessa. The collection is inspired by designs from the Roman Empire. The jewelry is currently available online.” Maksim tells me how excited he is about this jewelry collection. He explains to me that Cantamessa is currently in negotiations with major department stores as well as private jewelry stores to carry the men’s line.

While we are waiting for our coffee and dessert, Maksim describes the close relationship he shares with his family. “We are an extremely tight family. My brother, Valentin, shares a place with me in LA, and my mom and dad come to the West Coast to visit me often. My father is actually the CEO of my six Dance With Me dance studios back East. I am very close with my dad; we are best friends.”  Maksim tells me that he is still very involved with his dance studios. “My goal is to build the company and have two hundred locations around the country. I want to be competitive with Arthur Murray and Fred Astaire,” he says.

Valentin is also a professional dancer on the show, and I ask if there’s any competitiveness between Val and himself. He responds:  “There is zero competitiveness with me and Val. There is no possibility of that. It doesn’t exist.”

As we continue to speak about family, Maksim expresses his desire to get married and have children. “I raised so many children at the studio that I am ready to create one of my own,” he says. I am really ready to have a family now. I need an outlet. I have so much I want to give, and I need someone to give it to.”

It’s getting late, and Maksim leads me to the exterior patio. Outside the sky is stunningly blue and the moonlight is shining directly above us. The waiter realizes we slipped away from our table and serves us our coffee outside.  Maksim, holding his espresso in his hand, pauses for a moment and says: “I don’t know if I am going to return to DWTS. I have to work something out with the show. I am not going to get anyone at Meryl’s level or better.” I want Meryl to be the last person I dance with, the last person I got to be passionate with and care so much for.”

Styling by Maurice Mansouri of Mansouri

A special thanks to Rustique Toscano, and our beautiful location, Sofitel New York and Los Angeles