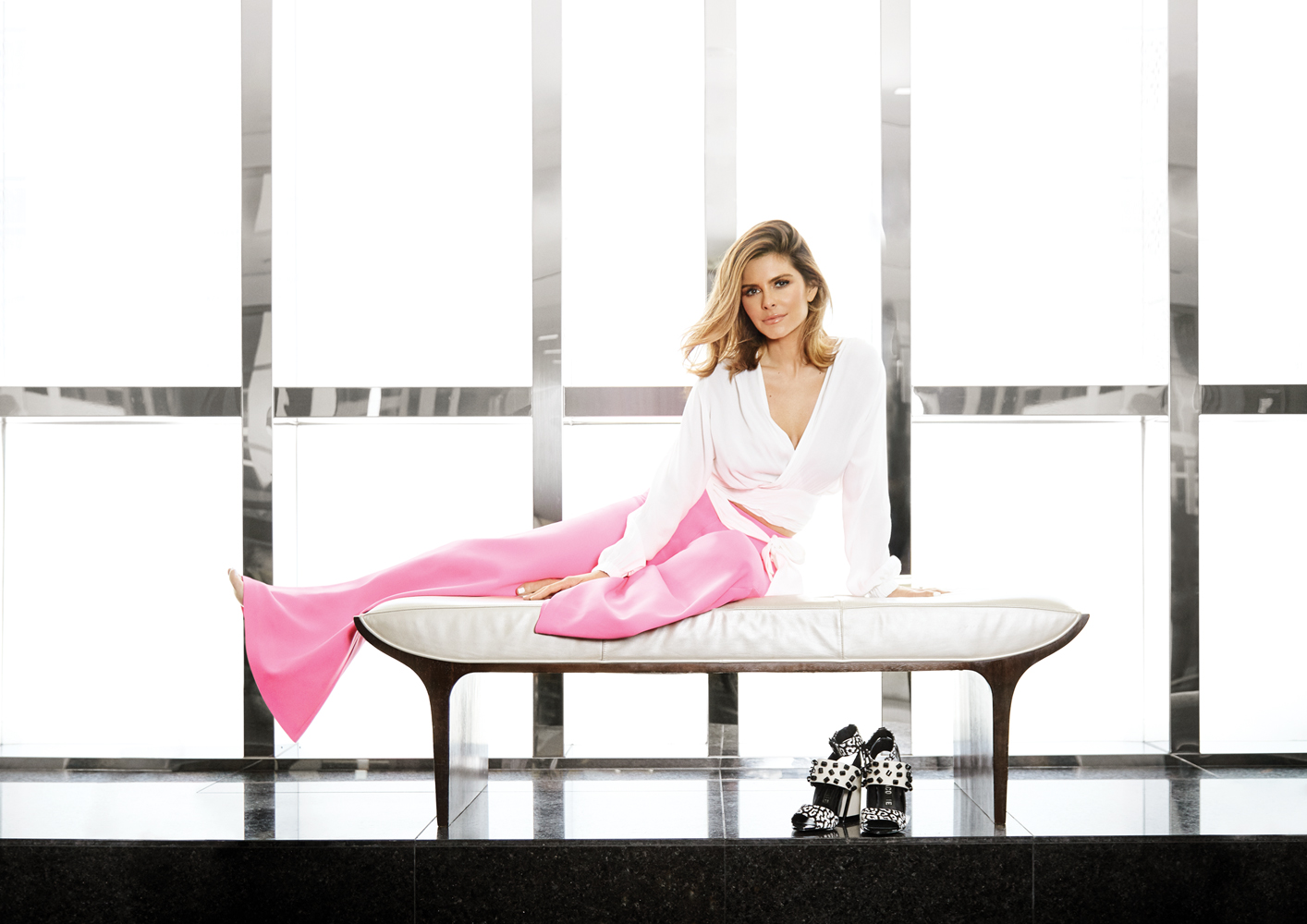 Maria Menounos possesses the type of beauty that is so unique it encompasses her body, mind and soul. Her vibrant personality, coupled with her fiercely driven passion for broadcast journalism, has garnered Maria international success and celebrity.  The former E! News co-anchor has many admirable, engaging qualities, but what is most compelling about Maria is her fearlessness; after undergoing surgery to remove a golf ball-sized tumor in her brain, the TV host is inspiring millions of Americans with her incredibly positive attitude toward life.

Shortly after Maria’s mom, Litsa, was diagnosed with stage IV brain cancer, the TV and radio host received the disturbing news last year that she had a brain tumor pushing on her facial nerves. While Maria was on set hosting E! News, she began experiencing symptoms that were oddly similar to her mom’s symptoms: earaches, blurred vision, headaches and trouble speaking. After postponing her MRI three times because of her hectic work schedule, and caring for her mom’s disabling health issue, the entertainment journalist finally scheduled the MRI that confirmed the growth in her brain. A few months later on June 8th, her 39th birthday, Maria underwent seven hours of brain surgery to remove the benign meningioma tumor.

Known for being one of Hollywood’s leading entertainment TV correspondents, Maria hosted numerous hit TV shows such as Today, Access Hollywood, Extra and E! News.  Aside from her many accomplishments, which include hosting her own SiriusXM radio talk show Conversations with Maria Menounos, co-founding Afterbuzz TV and authoring two New York Times best-selling books, Maria is now focusing on advocating health and wellness and encouraging individuals to get regular medical checkups.  The journalist admits that she didn’t see a primary care physician for approximately eight years and continuously put her health needs last while she was caring for others.

The day of Maria’s cover shoot is a Sunday, late in the morning. Our location is at the luxurious Sofitel, Los Angeles in Beverly Hills which offers stunning views of the Hollywood Hills and is conveniently located near Rodeo Drive and Sunset Blvd.  When I meet the Greek-American journalist on the second floor of the hotel’s modish lounge, she is incredibly engaging and upbeat; it’s hard to believe she underwent major brain surgery less than a year ago.

During the shoot, I speak candidly with the New York Times best-selling author about her health and ask her if she is still suffering from symptoms post-surgery. “I’m good!” Maria responds enthusiastically.  “There are little things, but nothing I can’t handle. I’m dealing with it. I feel great!” She goes on to explain that she started working out again two weeks prior to this magazine’s shoot and that she only began feeling  more like herself  before she got married on New Year’s Eve.  Maria recently married her longtime boyfriend, TV writer and producer, Keven Underago; the couple wed on FOX’S New Year’s Eve Live TV broadcast. Maria was co-hosting the television special with Steve Harvey when the duo exchanged vows just before midnight in Times Square. Keven proposed to Maria live on Howard Stern’s radio show back in March 2016, and the two had been dating for 20 years before they got married.

The Medford, Massachusetts native explains how difficult it was for her after she returned home from the hospital post-surgery. “My situation is compounded by the fact that my mom has a brain tumor of her own.” She was diagnosed with brain cancer a few months before I received my diagnosis. While I was trying to get through this, I was taking care of her. My father is a diabetic, and I was also responsible for being in charge of all of his medical supplies, and it got to be too much. My dad is not the kind of guy that can see somebody he loves get sick whether it’s an animal or a human; he just can’t handle it! He would come into my room and see me lying in bed, and he would burst into tears. I told Keven that we had to send them away. I knew I needed to get better. My mom is doing amazing now and her tumor is shrinking.   She is back in Connecticut with all of her family, so there are a lot of people to see, and she has a lot of stimulation.”

“Last October was a really hard time,” the actress reveals.   “After Keven had to go back to Connecticut to help my parents, I was handling things here. I was trying to recover from my own surgery and my poor dad, who was taking care of my mom full time, kept losing his medical supplies for his diabetes. He would call me, and then I would be on the phone for hours dealing with the insurance companies and trying to figure out why medications couldn’t get there fast enough. My partners at Rally Health were amazing; they heard me crying on the radio and my partner Grant, who created Rally, said, “Why didn’t you call us for help, why didn’t you ask?” And I said, “I didn’t know I could!” “I was stuck in my own tornado of stuff and Grant jumped in and said I got you! Between Rally and their partners at United Health, they helped me find a caretaker for my mom.”

Our final location for Maria’s cover shoot takes place on the Sofitel’s spectacular helipad which features breathtaking views of the Santa Monica Mountains and the iconic Hollywood Sign. Before we begin shooting, Keven arrives on set and walks toward the center of the helipad. He looks out into the distance and takes a moment to admire the unbelievable views of the Hollywood Hills. He then redirects his attention to his wife who is now standing very close to the edge of the helipad. As he becomes increasingly concerned with her safety, he shouts out, “Maria stop!” Maria spins fearlessly while holding the sides of her flowing red dress and poses for the camera. After the photographer gets the shot, Maria reveals that she’s feeling dizzy. Keven walks toward her and embraces her. His energy is very comforting and supportive on set, and it is apparent just how much he loves her.

Later we wrap the long day’s shoot and Keven joins Maria and me for dinner. We are seated under a lush outdoor cabana on the West Hollywood hotel’s upper pool deck. As we dine on our French Mediterranean food, Maria reveals why she feels her experience having a brain tumor has been a gift. “Every day I think that! I say thank you God every day for this tumor! I know it sounds really weird, but it changed everything by thinking positively. When I am coaching other brain tumor patients that are going to have surgery, I tell them what worked for me. I say, “I looked at this as a gift.”  You have to go deep, and figure out why. And for me, I knew instantly that my life needed to completely change. I was running myself ragged, and out of fear, staying in situations that I didn’t have to. We need to put more into ourselves. We need to refuel and recharge. I think in life we have choices. I wasn’t alone; I had a lot of love and support around me. There were two or three people that knew what was going on and they were there every step of the way; Keven, my best friend, Alyssa, and our best friend, Joe. As time drew closer to the surgery, I told a few more people and I guess I came to that conclusion that the tumor was a gift; it was because that tool was in my tool kit from going to Tony Robbins seminars where he says, “Life is happening for you not to you!”

Maria continues to enlighten me on her recent revelations and explains, “My brother and I were estranged for a long time, and we got back together the day my mom was in the hospital, “I felt like it was happening for us not to us.” I don’t know what would have brought us together other than that.  I saw why it was happening to my mom too. It was bringing my family back together, and it was also time for things to change for my mom. She is that typical Greek woman who puts everyone else first and herself one hundred zillion percent last. More than anyone would probably ever imagine, my mom needed to be the queen, and now she is.”

The late afternoon sun provides a tranquil ambiance on the pool deck. As we finish eating, I ask the self-described “type A personality,” what a typical day is like for her now.   “My day is very happy!” She says smiling. I actually didn’t know what happy meant, I really didn’t, until the last couple of months. I see life so differently now, whereas before it was such a fight and a struggle. I realized that I have my own talk show that I always wanted, it’s on the radio! I get to go in every day and talk about what I care about and what I’m passionate about. I have a podcast that drops on Fridays that I started for people who weren’t on Sirius, and I started guitar classes three days a week, which I absolutely love!”