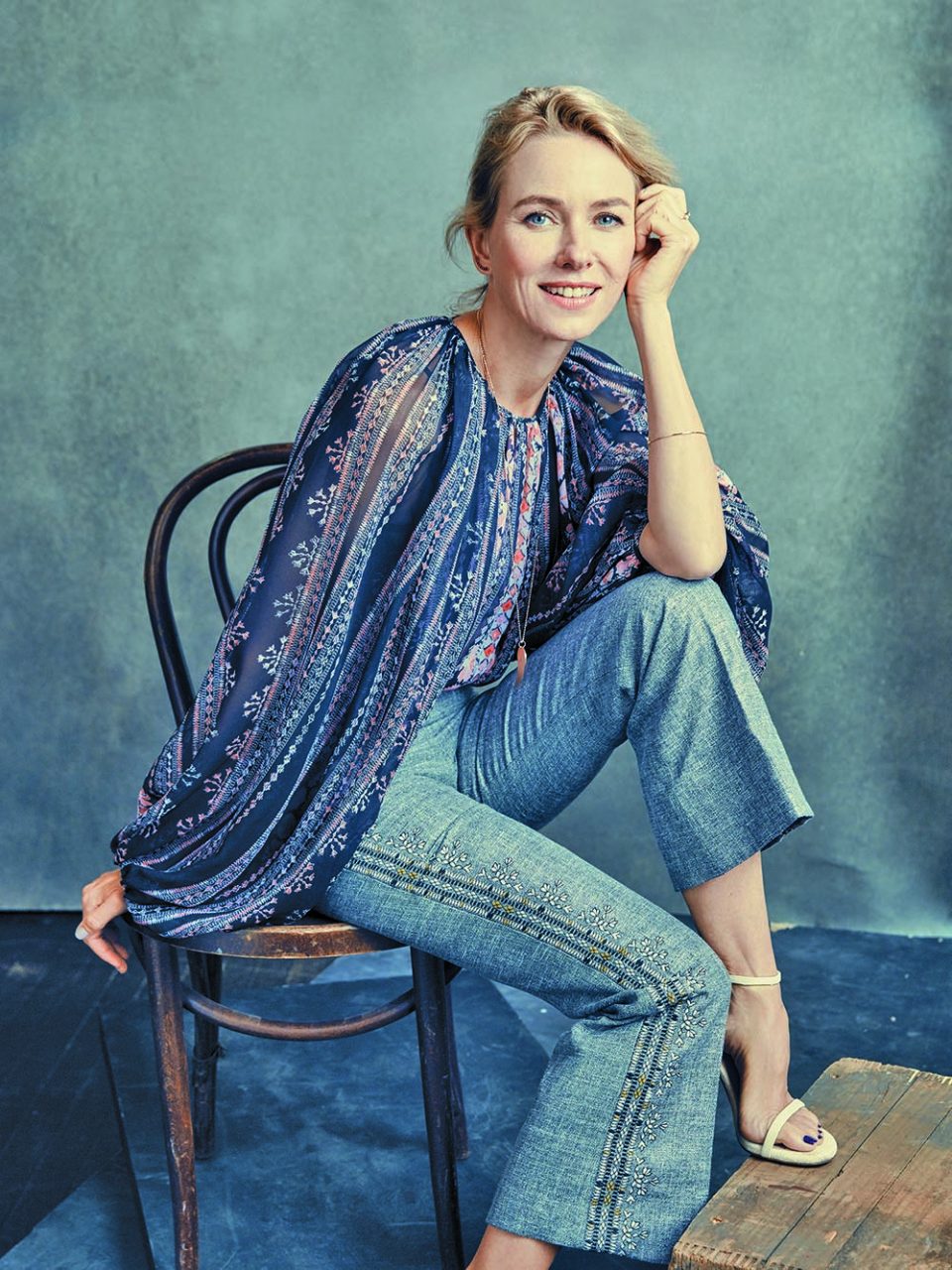 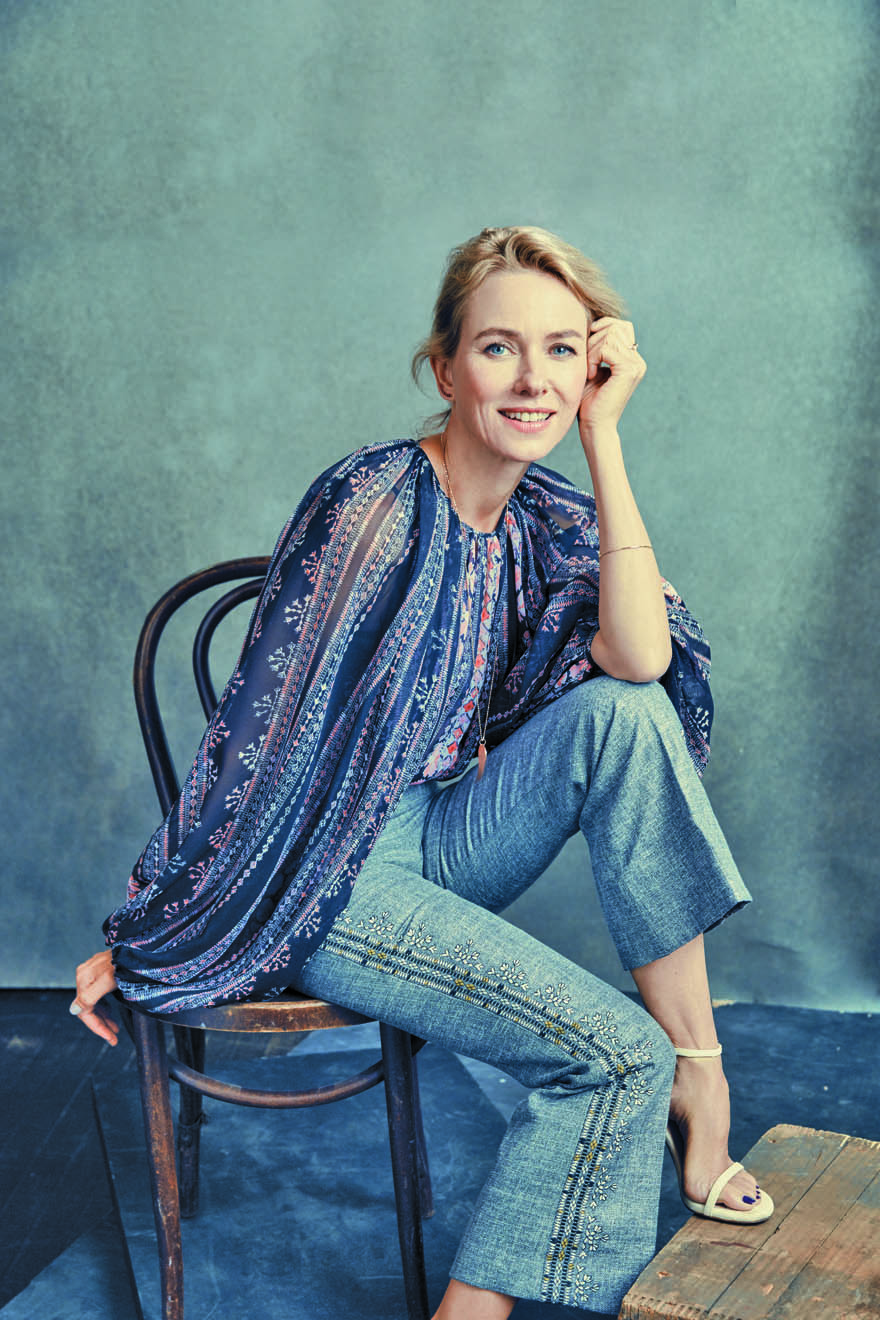 Naomi Watts, the talented and ubiquitous movie star who has had two Oscar nominations (among 102 nominations for various awards and 42 wins) . . . is, in fact, a very quiet, under-the-radar resident of Montauk (and New York City). Many are surprised by this because you won’t see the golden-haired actress in the society pages of East End glossies. What does Naomi do with her time in the Hamptons? Like many A-listers, she comes to the East End to avoid the “scene.” She instead, quite happily, spends time fishing with her children. Yes, the actress who turns heads in Oscar de la Renta on red carpets around the world also hooks squids and worms for her two sons, eight-year-old Samuel and nine-year-old Alexander. But when she isn’t carrying a tackle box to a marsh, Naomi is making films and these films, for the most part, tend to be quite unsettling.

Naomi Watts enjoys being pulled out of her comfort zone and led into darker psychological territory because that is where she gets “the kick” out of acting.  Off camera, however, the 48-year-old Watts is shy, a little hesitant talking about herself, but ever gracious. She was eager, though,  to open up about her new film, The Book of Henry, a twisting psychological thriller directed by Colin Trevorrow (Jurassic World).

The film centers on a single suburban mother, Susan Watts, and her two children, who find themselves caught up in a terrifying mystery. Susan’s older son, Henry (Jaeden Lieberher), is an eleven-year-old child genius who has assumed many family responsibilities, including mentoring his younger brother, Peter (Jacob Tremblay). After discovering that Christina, Henry’s classmate who lives next door, is guarding a dangerous secret, Susan is finally inspired to take charge of her family when Henry devises a plot to help Christina escape her difficult situation. For Watts, the story of a woman forced by circumstances to overcome her self-doubts and evolve into an active and empowered mother resonated deeply: “Every mom wants to do her absolute best as a parent,” Watts says. “I often feel guilty if I don’t think I’m properly on top of things, so I understood my character’s dilemma. She has figured out that her gifted son is capable of doing certain things much better than she can, and she lets Henry take over a lot of household responsibilities. Still, she’s not completely at ease with that balance even though it works well in her family’s case. Then, in the course of things, she is called upon to get more involved and become the best mother she can be.”

Appearing at the CinemaCon event in Las Vegas recently, Watts appeared almost embarrassed to receive the “Distinguished Decade” award on closing night. But the lithe Aussie actress was grateful for the honor and rocked a dazzling white Miu Miu dress featuring intricate lace patterns and a sheer midriff. She completed the look with black Manolo Blahnik wedge heels, a large shimmering necklace, and a black clutch purse.

Naomi, The Book of Henry is a dark thriller, a genre you’ve often enjoyed acting in over your career?

This story had a very human quality to it when it comes to this mother who struggles with herself and how she tries to manage her family. But what really made things more exciting was all the gear changes that take place.

There are so many unexpected twists and turns in this film that really appealed to me.  You think you’re relaxing into one genre and then the story takes a new direction and it’s suddenly a very different kind of drama.

There are some difficult choices that need to be made by Susan. What is your take on that even though we can’t  really get into the details?

My character wrestles with what she should do under the circumstances. Something is going wrong next door. So she’s dealing with the question of how far do you go in that situation and whether vengeance is a good or acceptable notion.

How did you approach the kind of mother–son dynamic between your character and her gifted son Henry?

That was another great element to things. There’s a role reversal taking place within this family. Susan has decided that Henry is capable of handling a lot of things in the house even though that’s one thing a parent should never allow to happen.

Then as events unfold she discovers her strength and her purpose as a mother and you see her experience a kind of epiphany and the family roles reverse again.  As an actor, you look for films where you can explore those kind of profound changes and transformations that take place within people.

Have you ever had any weird or mysterious neighbors yourself?

As a mother of two young boys yourself, how do you sort out all the feelings that moms experience in trying to be the ideal parent?

Moms are always multitasking and struggling to get their kids ready for school, making sure they’re eating properly, and usually racing around trying to get things done during the day.

Working moms also have the stress of wanting to succeed in their careers and still make sure they’re spending enough time with their children. You’re always plagued by guilt and no matter how much you get done you’re always thinking you could have done better.

How do you handle the daily stresses of being a mother?

[Laughs] There are days when everything is going wrong and I’ll be very critical of myself. Then there will be other days where I feel really good that I’ve been able to accomplish a lot and feel that I’ve done a good job looking after my kids.

But you’re never going to get it right all the time. I work a lot, so I always deal with the guilt that comes with not being able to tuck my kids into bed at night as often as I would like. I just try to do my best.

Your work in Mulholland Drive for David Lynch kick-started your Hollywood career. But you went through some very tough years prior to that in L.A.

That was a pretty rough time in my life. I felt very lonely and isolated and I would often be sitting by myself in cafés and spend a lot of time by myself.  It was a strange experience that I went through. I still wonder how that happened to me because I love being sociable and spending time with people.

L.A. is just a tough place if you’re not working and you’re not successful. Until David Lynch gave me the chance of a lifetime, I was just lurching from one job to another hoping to have enough money not to worry about paying the rent.  I was lucky, though.

David Lynch is reviving his iconic Twin Peaks series and you’re going to be working on it. What can you tell us about that?

Nothing. I’m not allowed to say a thing.  But it really doesn’t matter, because the way David works he doesn’t tell you anything about the story or exactly what you’re going to be doing anyway!