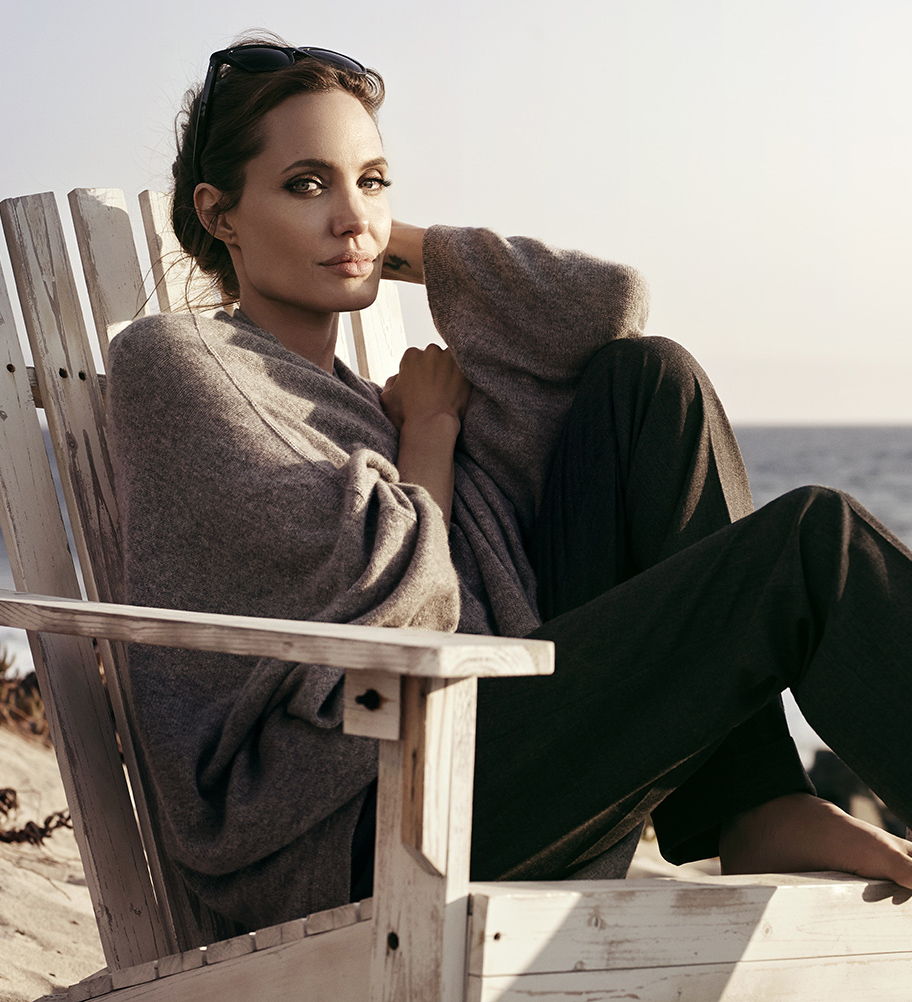 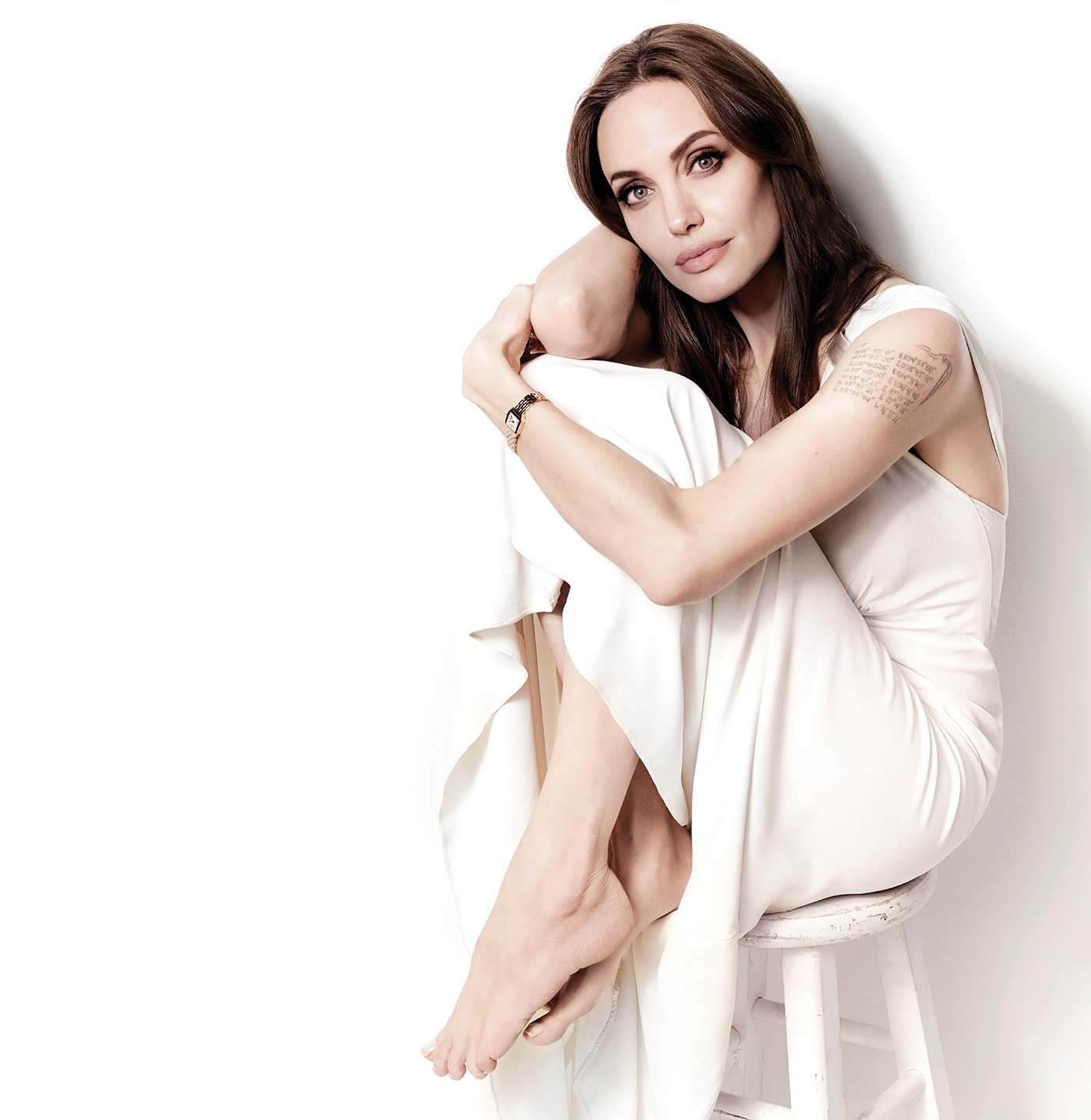 When you see Angelina Jolie in an oversized sweater, curled up on a chair, hair wind-swept, with a coy cat-like smile, it’s hard not to think, This is a woman who doesn’t have a care in the world. Her reality is the opposite of a lazy day at the beach. She’s a mother of six, movie director, movie star, UN ambassador, humanitarian, and global citizen. Right now she’s filming two new Disney movies: Maleficient 2 and The One and Only Ivan. Yet it can be argued that the most interesting aspect of this incredible celebrity is the evolution of her character and the transcendence of her physical beauty by her deep emotional life.

To date, Jolie has received an Oscar, two SAG awards, and three Golden Globes, and has received ten nominations for film and television roles. Jolie first rattled Hollywood in the HBO film Gia. Her role as a troubled model with self-destructive tendencies and heavy drug use was a far cry from the mainstream fairy tale movies of the ’90s. Although she was initially worried that HBO would try to tease out a pretty story from Gia’s experience, Angelina moved forward with the role. The filming ended up being a harrowing experience for Jolie and the emotional toll of becoming Gia moved her to briefly study screenwriting to clear her head. At this point, she was just a fledgling star, but the industry took note of her impactful beauty and the roles started to pour in. She quickly filmed Playing by Heart, Pushing Tin, and The Bone Collector opposite Denzel Washington. Although she had chosen the edgy role of Gia in order to be taken as a serious actress, it seemed that her beauty catapulted her quickly into mainstream roles.

A year after Gia, Angelina Jolie came back to the big screen in a major way. She starred in Girl, Interrupted and this time she made waves in Hollywood both on camera and off. The movie was supposed to have been an Oscar vehicle for Winona Ryder, who was the film’s lead actress and executive producer. Winona fought for Jolie, a relatively unknown actress at the time, to be a part of the film. Later, when Jolie won an Oscar for her role as Lisa Rowe in the film, the tabloids exploded with rumors of Winona’s disappointment over not being thanked for the opportunity she gave Jolie. But even more explosive was Jolie’s edgy behavior at the 2000 Oscars. Her dress and long black hair were reminiscent of Morticia Addams, and a kiss on the lips with her brother, James Haven, seemed to linger too long for anyone’s comfort. That kiss was a repeat of one photographed at the Golden Globes three months earlier. After that moment, it seemed like a string of strange publicity from wearing matching blood vials with her then husband, Billy Bob Thornton, to very bluntly discussing extreme behaviors of her youth as often as possible.

For a long time, her rebel without a cause way of life filled the tabloids and cast her in the role of bad girl. Although it’s a piece of her persona she hasn’t quite shaken free of, there has been a transformation in Angelina Jolie’s personal life. After adopting her son Maddox, Jolie started to channel the angst that drove her strange public persona into a less indulgent focus, that of changing the world into a more positive place. The rebel found a cause when she was filming Tomb Raider in Cambodia, a war-torn country that opened her eyes. After she wrapped filming, she reached out to United Nations High Commissioner for Refugees (UNHCR), the agency whose main focus is the well-being of refugees and displaced people. In 2001, she began traveling to places ravaged by war with devastating refugee problems. To date, Jolie has done over 40 field missions, has been named Goodwill Ambassador for multiple countries, and is the first person the UN has ever given a “Citizen of the World” award to. During her acceptance speech at the UN Correspondents Association Awards at Cipriani Wall Street, Jolie said that she feels “a sense of responsibility towards all other people all around the world fighting for the freedoms that we are very lucky to have secured years ago. And for me, this is what it means to be a citizen of the world: seeing yourself in the struggles of others.”

Her own personal struggles have taken quite a shift. When she first started making waves in Hollywood, she talked about her knife collection and her childhood dreams of working in a funeral home. After traveling the world with the UN and becoming a mother of six, Jolie decided to act on the knowledge that she carried the same gene that was responsible for her mother’s early death from ovarian cancer. She underwent two surgeries: first a double mastectomy, then an operation to remove her ovaries, and she has talked about this openly — in an Op Ed piece in the New York Times and magazine articles.

In an interview with Vanity Fair, Jolie said, “I actually feel more of a woman because I feel like I’m being smart about my choices, and I’m putting my family first, and I’m in charge of my life and my health. I think that’s what makes a woman complete.” Jolie said what keeps her up at night is thinking, “Did I do a great job as a mom or was that an average day? I’ve been trying for nine months to be really good at just being a homemaker and picking up dog poop and cleaning dishes and reading bedtime stories… And I’m getting better at all three.”

Most recently, Jolie has become the face for Mon Guerlain Eau de Parfum Florale. Once upon a time Jolie was a punk who colored her hair with sharpies, and now she is the face of an iconic brand whose definition of beauty is grounded in experience and not surface aesthetics. Discussing beauty with InStyle, Jolie said, “My mom used to say when I was little, ‘Let me see your soul.’ That was her thing. Whenever I’d get upset or something, she’d say, ‘Let me see your soul.’ What it meant was, ‘Show me you. Are you mad? Let me see.’ I’ve never really talked about that. I think, I hope anyway, that’s how I’m raising my children: Put what’s inside you forward and find you, figure out who you are. Beauty — everybody has a different opinion about what that is. Intellect is the most beautiful. When you see somebody who has a mind on fire, that’s sexy. A person who is empathetic and thoughtful and passionate — there’s nothing more attractive than that. There’s nothing you could wear or put on your face to cover up if your mind is blank and your heart is dark . . . I look in the mirror and I see that I look like my mother, and that warms me. I also see myself aging, and I love it because it means I’m alive — I’m living and getting older. Don’t love having a random dark spot from a pregnancy, sure. I see my flaws. But what I see that I like isn’t about a structure or an appearance. It’s more that I see my family in my face. I see my age.”

Jolie has moved from a woman who shocked everyone with her incredible beauty and unorthodox behavior to someone who values mastering quotidian activities of motherhood and believes aging is beautiful. She is truly a role model in today’s predominantly Kardashian culture, which focuses on makeup and social media. Hopefully more women of all ages will look to emulate Jolie’s growth and self-acceptance.