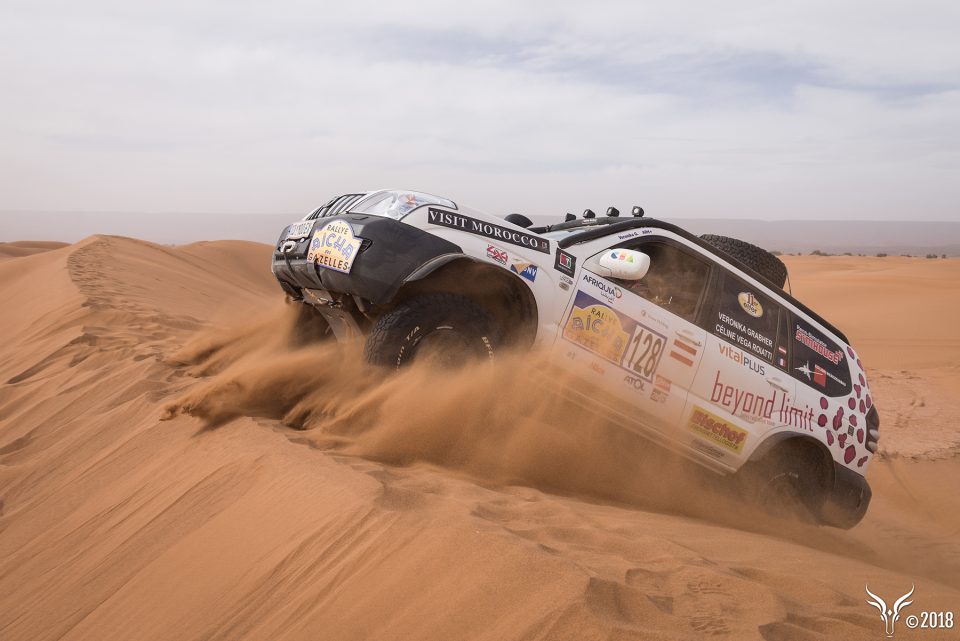 A Unique Adventure for the Modern and Courageous Woman

Year after year, the Rallye Aïcha des Gazelles du Maroc has been a pioneer, never ceasing to grow, constantly developing and evolving with the times, always faithful to its founding values: courage, the desire to push one’s limits, loyalty, solidarity and social commitment. The 29th annual event will take place between March 15-30, 2019 among the rolling dunes of the stunning Moroccan desert.

A unique concept with thoughtful and impeccable execution, the Rallye Aïcha des Gazelles du Maroc is the first international off-road rally race of its kind exclusively for women. Since 1990, it has brought together women between the ages of 18 and 71 from more than 30 different countries, who will embark on an adventure of a lifetime from Nice in the South of France on March 15th, 2019 and onward to the beginning of a nine-day rally competition in the Moroccan desert. 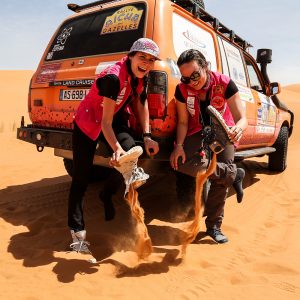 Each vehicle is equipped with satellite tracking system, powerful enough to provide minute by minute tracking, so even without seeing a vehicle for hours, the women are never alone. By the end of the experience, participants—known as “Gazelles”—have created adventure-filled new memories, deepened their bonds with their teammates, and pushed themselves further than they ever thought they could.

Through the actions of its non-profit, Coeur de Gazelles, the rally also respects its scenic host country and its people. Coeur de Gazelles works on projects that meet the needs of Morocco’s remote populations: medical care, education, the environment and sustainable development, job training for women, improving living conditions, and a desire to spread joy by distributing donations.

THE FREEDOM AND PLEASURE OF CHOOSING YOUR OWN PATH

The Gazelles’ goal is to drive the shortest possible distance to reach a series of predefined checkpoints. Free to choose their own route, they face a challenge each day: to study the map and the day’s geographical coordinates, analyze the risks and difficulties of the terrain and choose the shortest path. They have the choice of driving around a mountain or crossing over it, driving through the dunes or avoiding them… 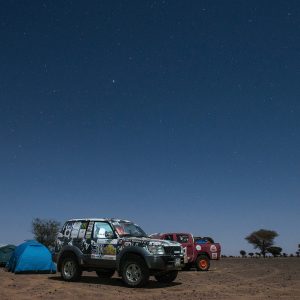 A COMPASS AND SOME COMMON SENSE

Every morning the Gazelles receive a «Road Book». This document contains only the geographic coordinates or headings and distances of the day’s initial checkpoints. Forget about GPS, phones and other modern communication tools: using a compass, a navigational plotter and maps, they plot their route and plan their itinerary.

TO WIN THE COMPETITION

The rankings are determined by calculating the extra kilometers driven (distance driven between check points minus crow flies distance) and penalty kilometers for any check points not reached. The winning team is the one that finds the greatest number of checkpoints while driving the least number of kilometers.

EXPERIENCE THE MAGIC OF AFRICA

Morocco, host country of the Rallye Aïcha des Gazelles since its inception. Gazelles in search of challenging terrain and the great outdoors will be seduced by the magnificent and varied landscapes of Morocco, with its sand dunes, rocky mountains, green valleys, fertile plains, arid plateaus and lush oases. The Rallye Aïcha des Gazelles du Maroc takes place under the High Patronage of His Majesty, King Mohammed VI, who has authorized the use of the Royal Coat of Arms on the Gazelles’ vests. This is the only event that has ever been granted this honour. Many Moroccans come out to welcome and assist the competition at every step of the way, from the dunes of Merzouga to Essaouira.

The Rallye Aïcha des Gazelles du Maroc is the first women-only off-road rally in the world.  Created in 1990 by Dominique Serra, the Rallye Aïcha des Gazelles has been creating a new vision of automobile competition: no speed and no GPS, just old-fashioned navigation, completely off-road—a return to the roots of adventure. The only requirement is determination. The women who take part in this rally—known as “Gazelles”—are of all ages, social backgrounds, nationalities and levels of off-road experience. Whether in a 4×4, Crossover, Quad, truck or motorbike, they all come to take part in a unique competition: whose competitors share the values of tolerance, solidarity and determination, that respects the host country and its people through the actions of the Rallye’s non-profit, Cœur de Gazelles, and that cares about the environment: the Rallye Aïcha des Gazelles is the only automotive rally in the world with ISO 14001 certification.

While the Rallye Aïcha des Gazelles marks a return to the roots of adventure, it is also on the cutting edge of technology, with a satellite tracking system for optimal safety. We have been putting forward a new vision of motor sport for years, with the development of an event where the adventure lies in driving without excessive speed, and where the goal of driving the shortest possible distance is in line with our environmental commitment.