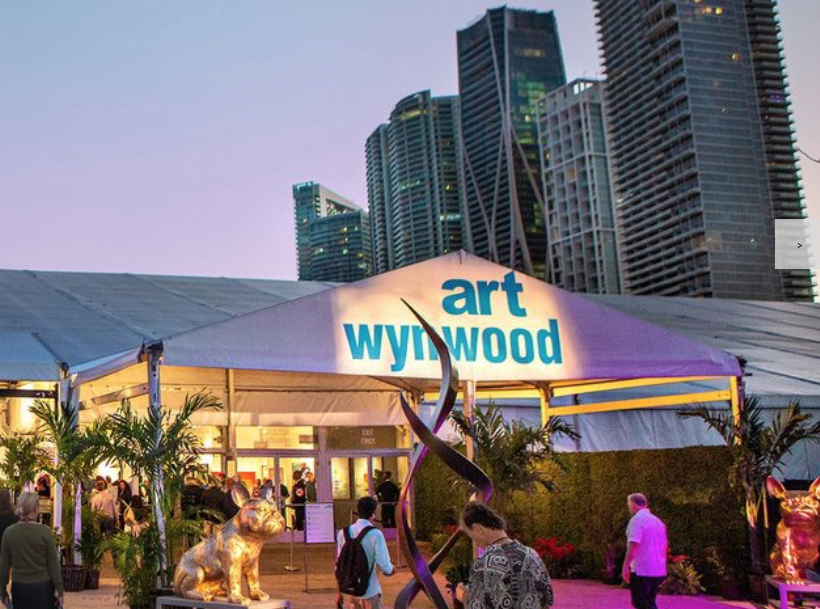 Attendance was up year on year by 11% as the fair welcomed more than 28,500 affluent and culturally savvy art aficionados throughout Presidents Day weekend who acquired the finest work from emerging, mid-career and blue-chip contemporary, modern and post-war artists, including a dynamic array of, pop surrealism, street art, performance art and street art murals.

“Presidents Day weekend is the busiest weekend in South Florida and for its eighth edition, and moving forward, Art Wynwood will share the prestigious waterfront property of One Herald Plaza with the Miami Yacht Show. The synergy of two luxury lifestyle events proved to be a winning combination as our combined well-heeled audiences created increased foot traffic and demand among a diverse group of attendees for our world-class art. We will continue to grow the quality and demand for blue-chip contemporary and modern art side by side with the continuing evolution, growth and importance of Miami as a destination for the arts” stated Fair Director and Partner, Nick Korniloff.

Cernuda Arte placed Carnival Sorcerer, 1945 by René Portocarrero, breaking a record for the artist’s sales figures at $460,000. They also placed lithographs by Wifredo Lam, including a set of six titled The Vertical View #XX/XX, 1973 and Manner of Speaking, 1982 from Lam’s Annunciation series. They also placed Young Women with Umbrella and Cat, 1940 by Víctor Manuel García and Peasants, 1942 by Mario Carreño. Ramón Cernuda, Director, Cernuda Arte, comments, “This was a great fair. Art Wynwood was a resounding success. The presence of the South Florida art public, plus the visitors from the boat and yacht shows made it a dynamic event. This fair was the first time ever that we surpassed the one-million-dollar sales barrier. Fantastic results. Thank you.”

On Friday, February 15th, artist Ron English was honored with the fifth annual Art Wynwood Tony Goldman Lifetime Artistic Achievement Award by Art Miami, in partnership with Wynwood Walls, at a four-course dinner with wine pairings at the elegant Boulud Sud. The award was presented by Nick Korniloff, Director, Art Wynwood, Jessica Goldman Srebnick, CEO, Goldman Global Arts, and The Goldman Family. The Award acknowledges individuals in art whose careers have changed the industry. A portrait of Ron English by English-born and Brooklyn-based artist David Hollier, represented by New Apostle Gallery, was presented to the artist during the dinner. The portrait is comprised of text taken from an interview English conducted. English commented, “I was incredibly honored to be recognized with the 2019 Art Wynwood Tony Goldman Lifetime Artistic Achievement Award. I have known and admired the Goldman family since the day Tony came into my life and changed it forever. The Wynwood project has enhanced our culture and touched millions of lives. I am so proud to be a part of it. Art Wynwood is bursting with energy and interest in Miami, teeming with engaged patrons of art. Nick Korniloff and his team make it seem so effortless, elegant and fun.”

Art Wynwood hosted multiple curated brunches and intimate cocktail receptions in the VIP lounge, each followed by private tours, for multiple museum groups and professionals throughout the weekend.

The annual Presidents Day Weekend fair brings a major contemporary art fair back to Miami for serious collectors and budding art enthusiasts to discover and acquire some of the most important works of the 20th and 21st centuries. In its prime location, nestled between the Venetian Causeway and MacArthur Causeway, just east of Biscayne Boulevard, Art Wynwood offers an unprecedented level of convenience to and from Miami Beach, while being located in the heart of the cultural epicenter of Miami. This year, with the world-renowned Miami Yacht Show debuting alongside Art Wynwood at the One Herald Plaza location, VIP Preview ticket holders were provided complimentary admission to the Miami Yacht Show.