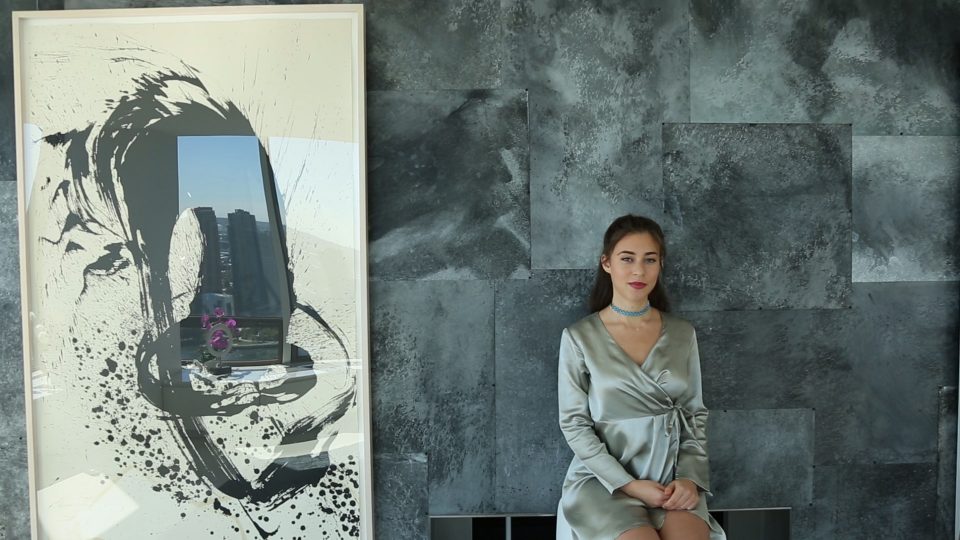 Roni Willett, a financial analyst, philanthropist and graduate student, began advising her family in the purchase of artworks since 2013 when they had to fill their newly renovated New York City apartment.  She was 18 years old at the time and is now 23.

She studied art history in school, interned for prominent New York art advisor Sandy Heller, worked with the contemporary artist Alex Israel in Los Angeles and spent two consecutive summers taking courses at the Sotheby’s Institute of Art in London. Growing up surrounded by art coupled with her education and past work experiences in the field allows Roni’s parents to instill trust in her to make the tough decisions regarding the art and furniture that decorates their various homes.

“Aesthetically, my parents trust my judgment.  They appreciate my commitment to showing them artists they had previously not known but prove to be valuable.  These artists are ones that I have studied, stumbled upon by going to galleries or museums, or have heard of through word of mouth,” she says. She relies on her instincts as to why they should invest in a particular artist and/or a specific piece. Taking over her family’s collection happened naturally over the course of a few years.

Over the course of six years, Roni has built an impressive art collection of more than 60 works by A-list artists including Yves Klein, Richard Serra, Chuck Close, Julian Opie and others. “At my recommendation, my family collects art from artists with different nationalities, race, age, gender and political or social agendas,” says Roni. “We have pieces that explore different mediums that range from paintings, sculpture, mixed-media and furniture.”

One of Roni’s favorite pieces in her collection is an oil-on-canvas portrait of her by Richard Phillips. “I have always been a fan of Richard’s so to see first-hand his process and more importantly to be a part of his process was an eye-opening and very enjoyable experience that I will never forget. The portrait serves as a great souvenir of the time I spent with Richard to create this work of art,” she says. Two other pieces in her collection that she considers standouts are   “Simahue Walla (The World Stage, Israel)” and “Not Yet Titled Bronze Bust” by George Condo.  Both are among her favorite artists whose work she has admired for as long as she can remember. “Wiley is known for using traditional mediums with contemporary figures.  His heroic and regal portraits are set against eye-catching, brightly colored and intricately designed backdrops.  While his work catches your eye, Kehinde forces the viewer to reconsider society, history and stereotypes.  I admire how he successfully aims to redefine identities,” says Roni.  kehindewiley.com  Roni says George Condo “is our modern day Picasso. He depicts figures that are distorted and otherworldly but are extremely beautiful, appealing and sexy.”

Roni describes her collection as an assemblage of pops of color, bold statements and cultural diversity. She tends to be attracted to contemporary artists that have worked in the latter half of the 20th century through today. “Within the overarching classification of contemporary art, our collection is diverse,” she states.

Roni believes having a diverse range of artists and mediums in a collection allows each work to become a part of a vision greater than if shown alongside pieces with similar characteristics.  She says, “Different mediums, colors and varying subject matters can play off each other in a conversational way and, therefore, enhance the experience of the viewer.  I take pride in showcasing the inevitable yet compelling way an artist takes into account other cultures and other artists, from the past and present, due to the fact that we live in a globalized and connected world.”

“Art can no longer be classified solely as a beautiful object due to the astronomical prices in today’s art market,” says Roni. She thinks it would be foolish to ignore the fact that art is seen as an investment. With her current career in finance, this type of thinking has become second nature.  She assured me that today “there is extreme interest in fine art internationally and history proves that there will always be a market.”  She advised that having a diverse collection can mitigate some risks from a financial standpoint.  Look for diversity in artists (emerging vs. blue chip), mediums (paintings vs. sculpture vs. photographs, etc.), artistic periods (Contemporary vs. Old Masters, etc.) and even geographical origins (American vs. European vs. Asian etc.) because demand can change.

“The core of collecting, for anyone, starts with one’s personal aesthetic. The first step is finding a piece that moves you and can be imagined in your home.”  Once you’ve found the piece Roni says, “research, research, research! If you are not familiar with the artist, find out where he or she went to school, which galleries his or her work is shown, and historical data about the artist such as past auction prices and publications in which the artist appeared.” She recommends checking the provenance of the piece, its edition number, making sure it is being sold by a reputable vendor, as well as checking auction records and online vendors, such as Artsy and 1stdibs, to make sure the price is accurate. “With prices at an all-time high it would be foolish to buy anything without considering its short-term and long-term value,” Roni explains. “This is where my love of art meets my financial side.”

Roni’s family collection is displayed throughout their various homes rather than in storage.  They have never sold a piece in order to acquire another. “For now, I enjoy being surrounded by the art my family and I have collected. Our home wouldn’t feel the same without the pieces that are hanging on the walls.” They sometimes rearrange pieces as they add to their collection, but for the most part, once they choose a spot it stays put.

Roni has been exploring the possibility of expanding her family’s collections to other movements; for instance, she is intrigued by Old Masters and art from the Renaissance. “Symbiotically mixing our contemporary pieces with art from other generations will create a provocative juxtaposition between the pieces when displayed in the same room.”  “My goal is to continuously amass a collection that can ultimately be enjoyed by my kids and grandkids,” she says. She considers donating pieces to museums a priority because she believes that art should be viewed and experienced by everyone. “We’ve loaned pieces to museums in the past but looking forward I intend to do that more often.”

Roni lends her energy to a number of philanthropic causes; the four in which she is most active are the Michael Milken Prostate Cancer Foundation, United Hatzalah, the USC Shoah Foundation and the CFDA Foundation (Council of Fashion Designers of America.)

Roni got involved with the Prostate Cancer Foundation after seeing the passion her family friend and founder, Michael Milken, displayed towards the cause.  “The foundation’s hard work and progress in the fight to beat prostate cancer was a true inspiration.  I admire their technological advancements and research feats, such as training dogs to detect certain cancers.” She hosts events for the foundation designed to get her generation involved.  Raising awareness and educating the younger generation is, to her, paramount to prevention. “At the luncheons, materials with key steps of prevention will be a part of the table setting so everyone leaves, at the very least, learning something.  I’ll also point out the numerous ways one can get involved and how to donate.”

Her mother, step-father and sister, Renee Willett, are all supporters of United Hatzalah, which provides “specially equipped motorcycles in Israel. These ambucycles allow a trained medical professional to get to an emergency situation in 90 seconds.  They end up saving on average 100 lives a day by responding to calls that range from a bomb going off to a car accident to a mother giving birth,”  says Roni.  She helps organize fundraising events and solicit speakers to raise awareness among Americans for the Israeli organization. Roni and her family threw a small event in Miami in February, the same week we spoke for this article. “We weren’t expecting it but it was a wonderful surprise that a lot of guests ended up donating at the event.”

Roni is helping to promote the CFDA, particularly in L.A., to create a buzz amongst her peers. One recent event she worked on featured a Q&A with fashion designer Diane von Furstenberg, who is the president of the CFDA, for a small group of about 100 people.

Highlights included several panels that took place at and were put on by Africa House.  The variety of panels focused on the past, present and future of the relationship between African countries and the rest of the world. One panel included talks with several first ladies from different African countries.  Another panel, sponsored by ARTnews, included discussions between a young woman from the first graduating class of Oprah’s school in South Africa and other influential professionals well versed in African Art.  While another panel spoke about Africa’s representation in Hollywood.

Roni’s friend, a Moroccan artist, enlisted her to help set up the project. The two curated the space like an art exhibit featuring contemporary artists that were African or of African descent.  Roni says, “curating the space was challenging and fascinating.  I previously had limited knowledge about African Art but enjoyed exploring and learning about the different cultures and identities Africa and African artists have to offer.  I believe we successfully accomplished our goal to showcase the power in the multiplicity of identities across the African content and give voice to these artists as individuals from independent countries.  We wanted to begin a dialogue that would transcend borders from the viewpoint of each African country rather than looking at Africa as one entity with only one voice.”

Africa house became an opportunity for emerging African artists to showcase their work on a global stage. The exhibit included the works of emerging and non-emerging artists from 15 different African countries.  The works of the emerging artists were displayed next to works of renowned artists such as Jean-Michel Basquiat and Kehinde Wiley.  Africa House drew numerous African heads of state, ambassadors, business and art world leaders and luminaries, and even a few celebrities like Naomi Campbell. The duo hopes to do more such events in the future.

Roni’s day job is as a financial analyst working with high-yield and distressed assets. So how did she get into that field after majoring in art history and French at USC?  “I gravitated towards finance because I see importance of having a business mindset,” she says. She had to study for the tough Series 7 and Series 63 exams, which are required to obtain a license in her industry. “The industry can be challenging at times but that is what I love most about working in the field.  I am determined to continue learning and building my business skills.”

She also places value on the fact that business can be applied to her other pursuits such as collecting art and philanthropy.  She believes this so much that she took up night school with the University of Southern California’s highly selective Iovine Young Academy created by music industry moguls Jimmy Iovine and Dr. Dre.  The degree covers business, entrepreneurship, technology and design.  “The program is extremely innovative by teaching students to become or create disruptors. Courses involve ideation and problem solving.  The degree stresses the importance of a cross-disciplinary outlook through the mixture of technology, business and design.” Roni graduates in May.

Roni is bright, easy to talk to and has a heart of gold. At the age of 23 she is extremely ambitious and motivated. She is an inspiration to her peers because she promotes a lifestyle that includes working hard, helping others and following one’s passion. instagram.com/roniwillett​