New York City-based artist Robert Cenedella is known mostly for his satirical work, which depicts changing rituals and myths of contemporary American society. Amongst his famous paintings is “The Tourist,” which features a parody of L.L. Bean catalogue with, a giant lobster sitting at a table with a steamed tourist on his plate. In the ‘60’s, his exhibit “Yes Art,” was one of the most popular and debated shows of the year, getting more publicity than any other artist at the time, including Andy Warhol. It was perhaps because the show featured work where the artist had thrown freshly boiled spaghetti onto a canvas. 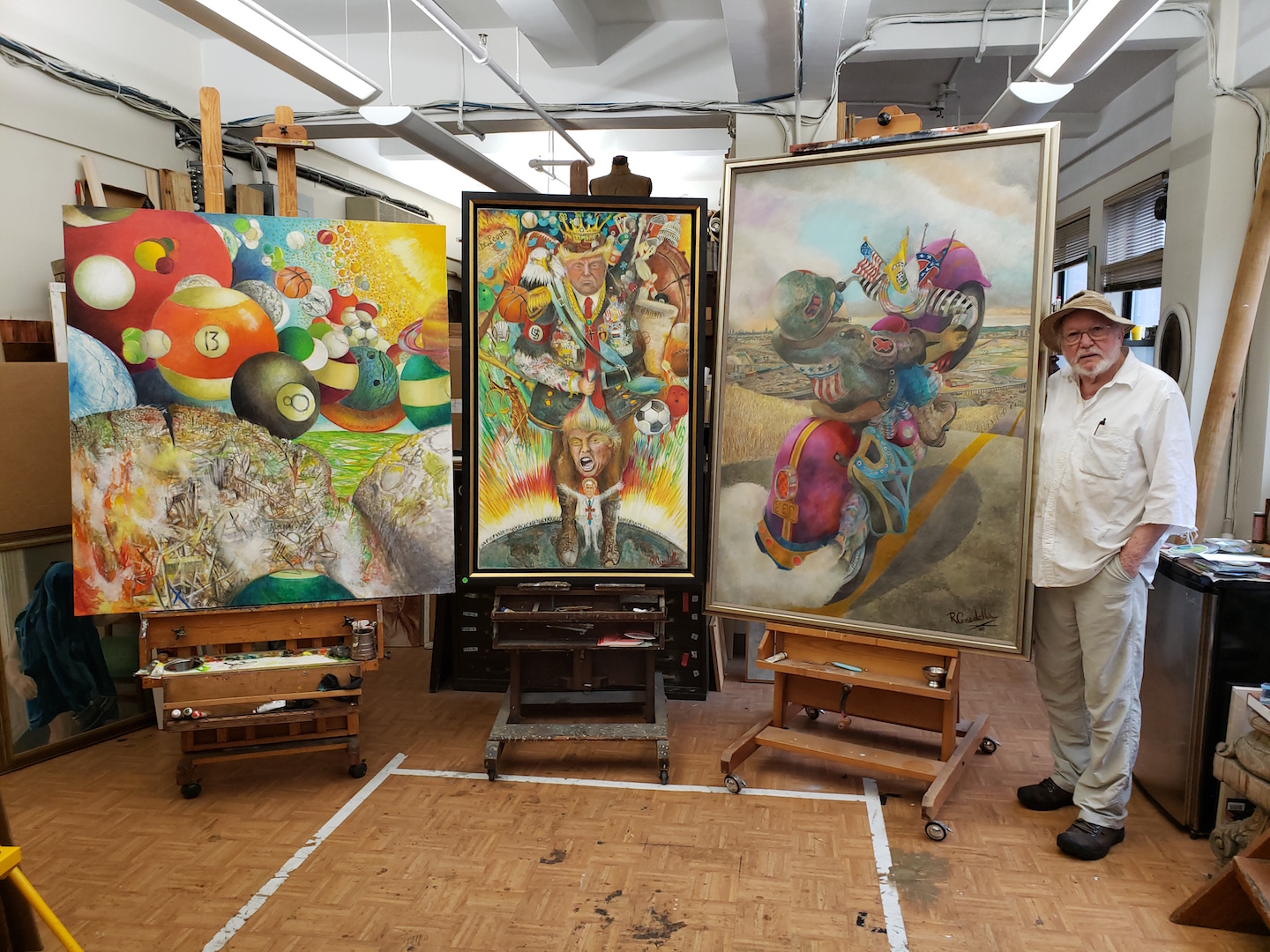 The same year of his “Yes Art” exhibition, his painting “Southern Dogs” showed a black man being attacked by dogs faces of policemen, and policemen with faces of dogs. Even though it was a reaction to the civil rights demonstration happening at the time, the painting still speaks to some of the social issues present today across the United States.

Always challenging the art world, Cenedella hopes his latest work, “DISCLAIMER,” will convince museums to examine the criteria used to select works for display. He wants to push these institutions to acknowledge their dual roles as public authorities on art, and makers of fortune in the multi-billion-dollar art auction market. The piece painting contains the following text: “While it is the intent of this museum (a business) to present works of ‘art’ of the highest quality, selected by our hired staff of ‘professionals,’ we as a museum cannot claim that the works we display are necessarily great works of art…” The piece compares the evaluation of art to stock speculations and points to the museum’s complicity in that speculation.

A teacher at the Art Students League of New York, Cenedella has thumbed his nose at the art establishment 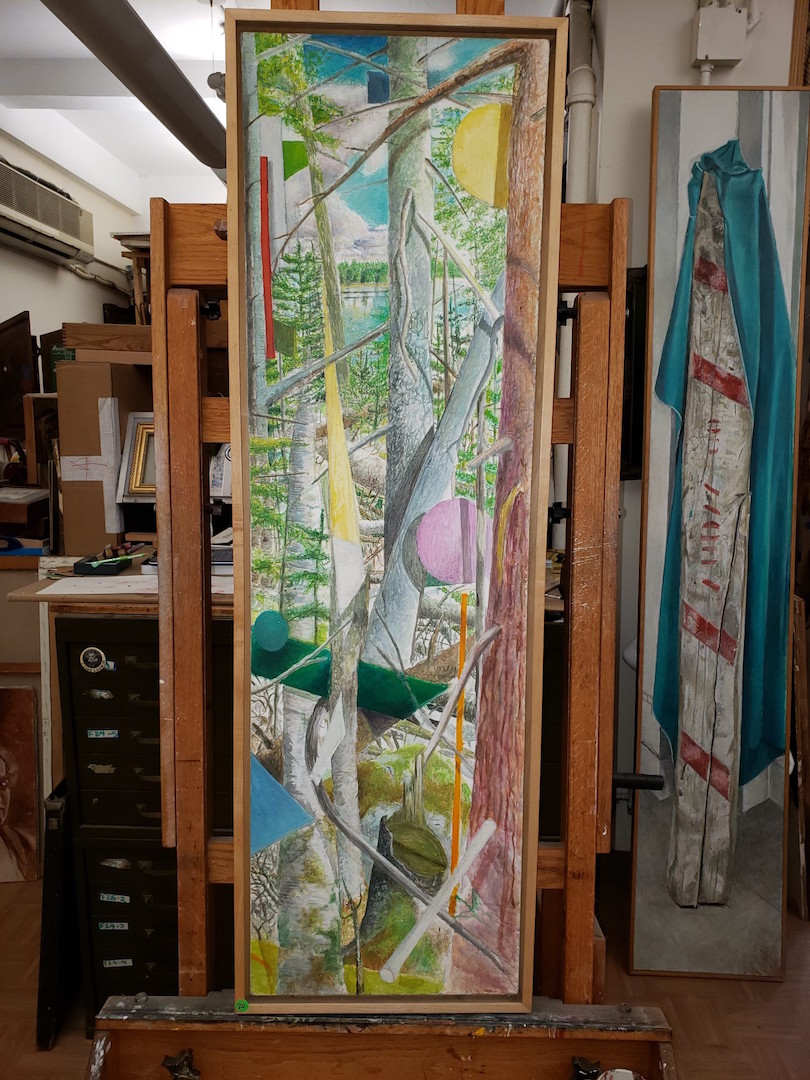 for more than five decades now. It has earned him headlines in practically every publication, from the New Yorker and the New York Times to the NY Post. With “DISCLAIMER,” he decided to take his protest to the public, saying, “It should be hung in every museum in America. It should be there for everyone to see before they walk into a contemporary art exhibition.” Cenedella’s work will be in the permanent collection of the Poster House Museum, which opens on June 20th.

It is this unwillingness to work with what he considers to be a corrupt gallery system, that has kept him out of the mainstream and led to the 2016 documentary ART BASTARD that depicts the life of someone who never fit into the contemporary art world has still become one of its most provocative characters. The film, “Art Bastard” is an energetic, humorous and unapologetically honest documentary about Robert Cenedella. “I paint what is around me. I am not just a political painter. IN Maine, I paint landscapes all the time,” referring to the summers he spends with no electricity or running water at his family’s 40-acre Burying Island. “But the city is where you are inundated by the news media.” perhaps alluding to the inspiration behind his collection of satirical and provocative paintings of political figures, including most notably, of Donald Trump. 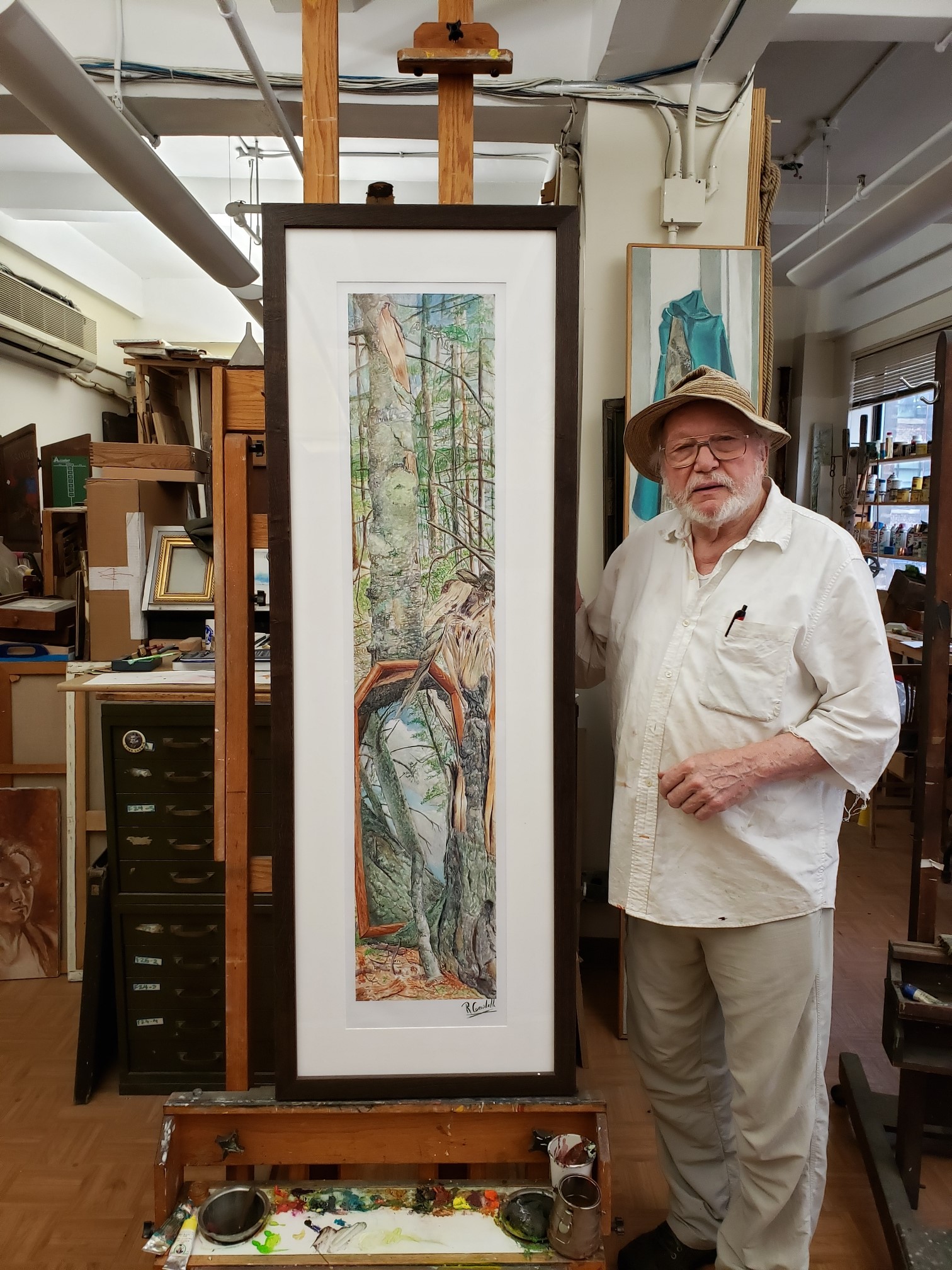 Standing by his belief of in corrupt gallery systems, he launched a new tool on his website. Now, the public can buy his work online at rcenedellagallery.com/. The options vary from canvases, posters, digital print to t-shirts. Perhaps the best way to acquire something from the most widely written about unknown American artist.