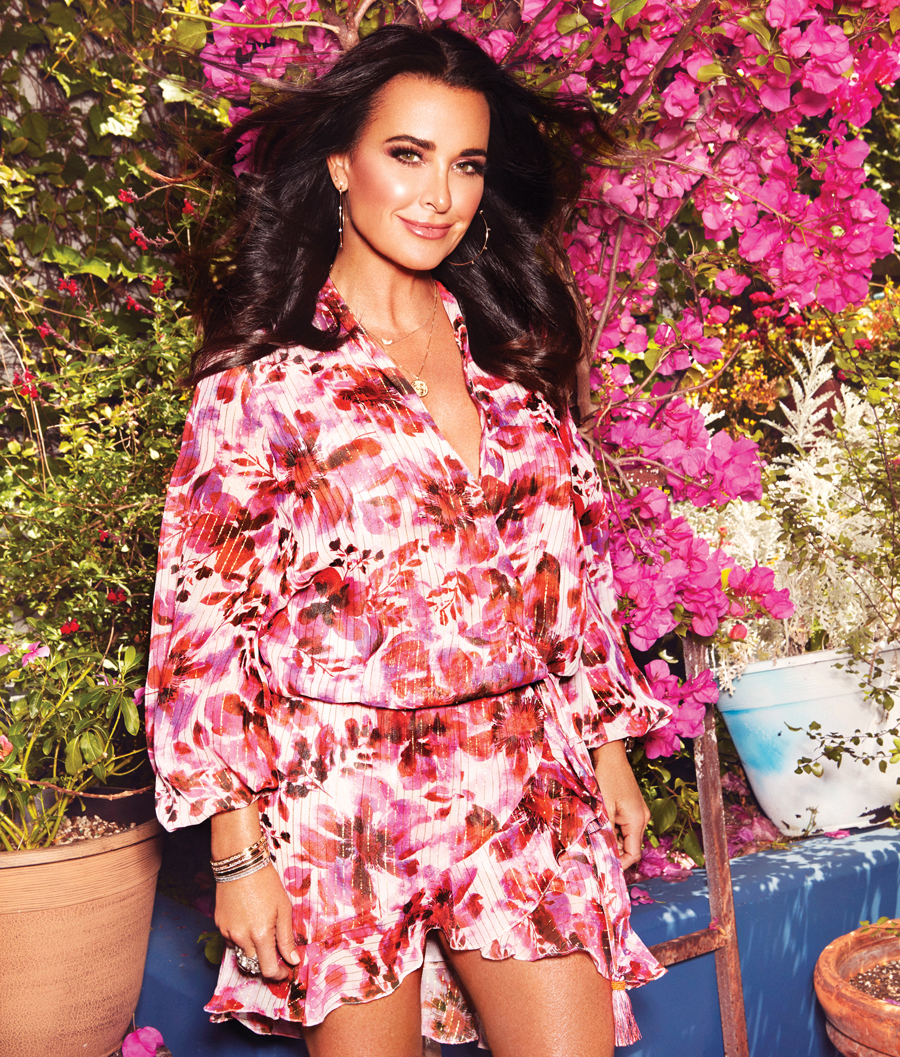 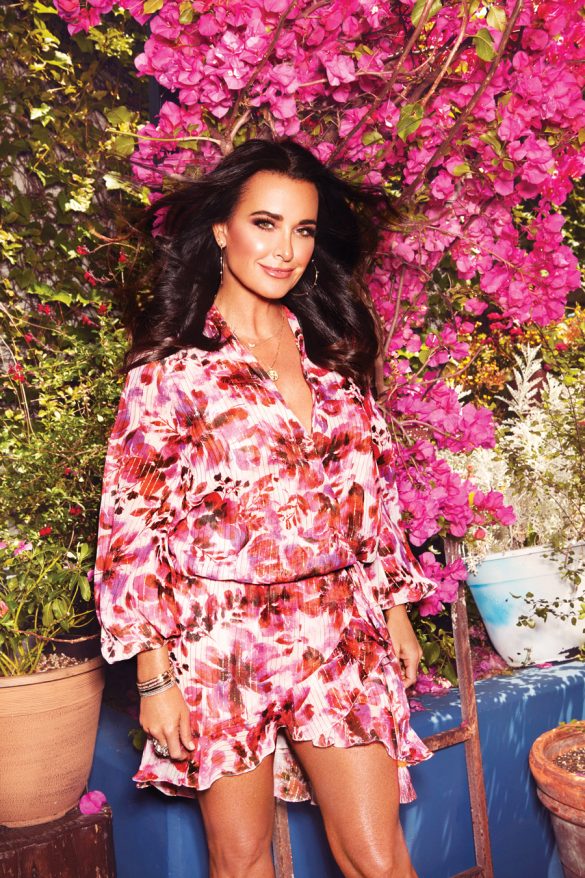 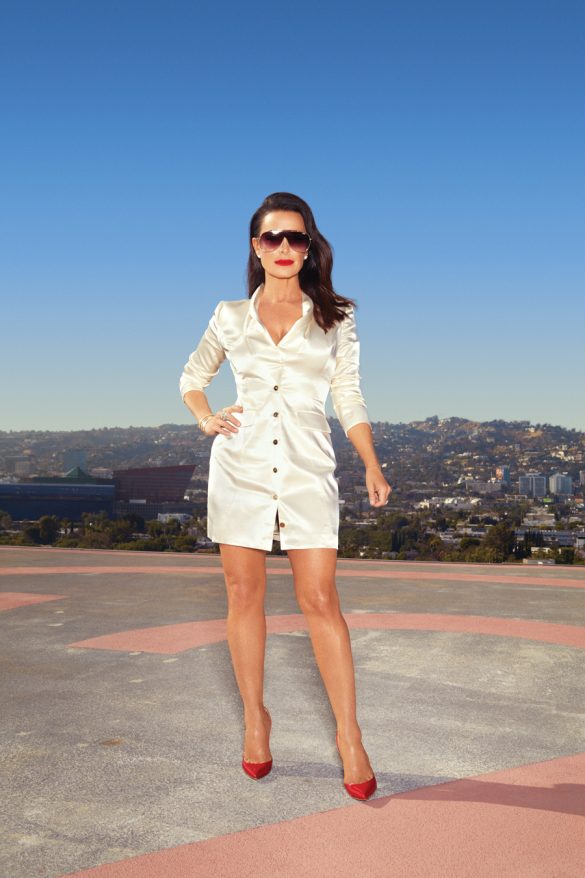 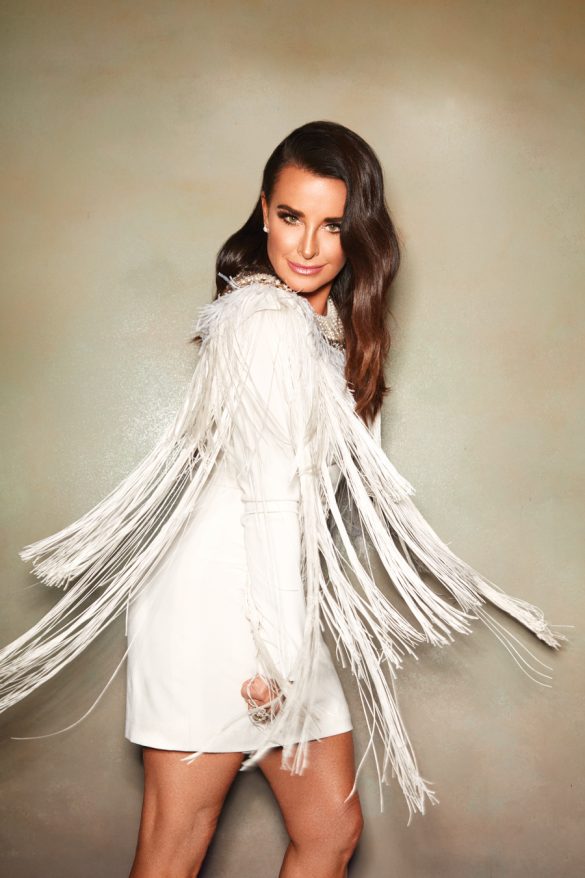 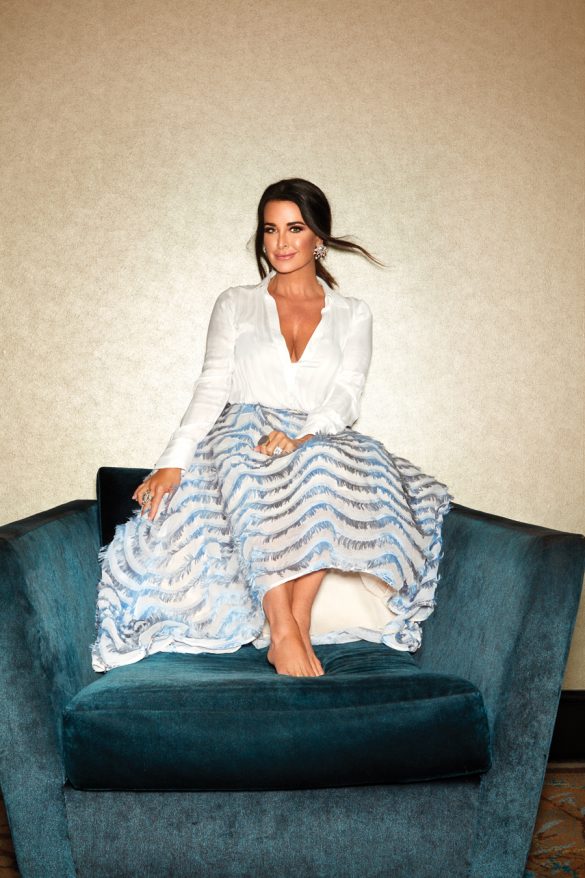 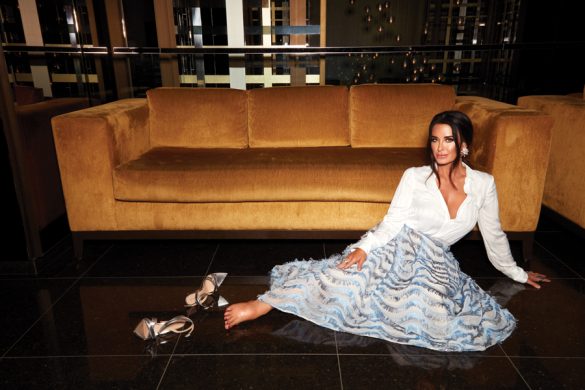 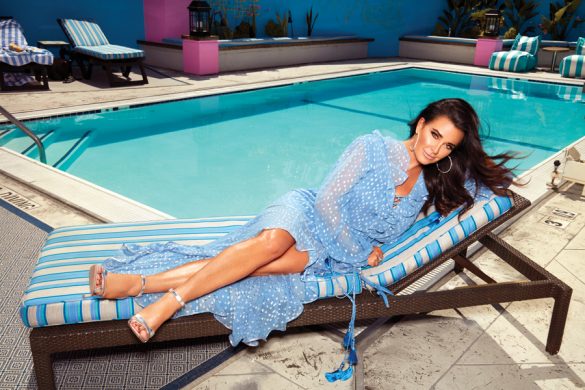 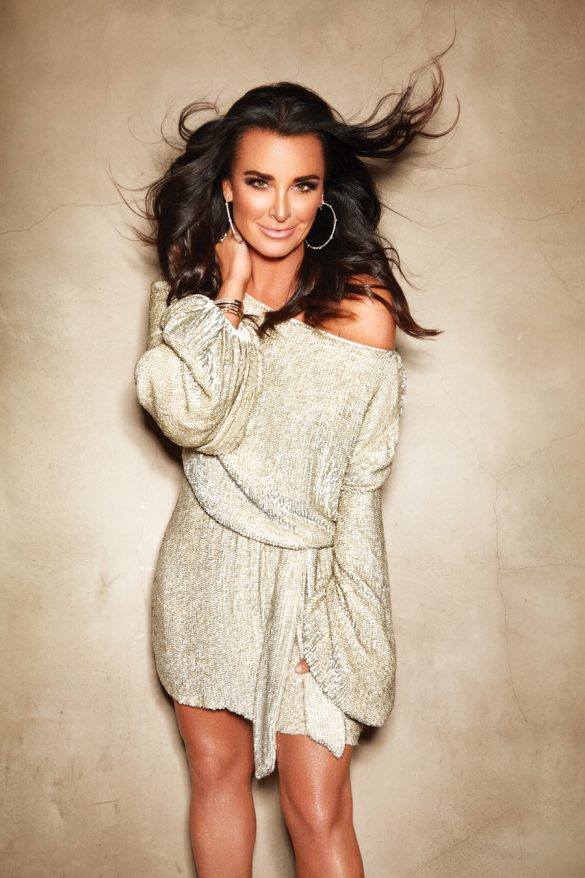 From the moment you meet Kyle Richards, you are captivated by her presence. Her glamorous Hollywood beauty, radiant personality and sensational career in film and television is so extraordinary, it’s not surprising viewers are enamored with this chic and dynamic star. As an accredited child actress, Kyle’s career exploded at the age of four when she made her debut in Disney’s Escape to Witch Mountain followed by the role of Alicia Sanderson Edwards in the classic family television show, Little House on the Prairie, and later she starred alongside the iconic Betty Davis in the feature film, The Watcher in the Woods. Success for the star of Bravo’s unscripted reality series, Real House Wives of Beverly Hills is not only limited to her acting abilities as she has appeared in over 100 TV shows and films, but is also due to her other unprecedented accomplishments: executive producer, entrepreneur, author, and philanthropist. With several other creative projects in the works, the fan favorite of RHOBH currently stars in the 9th Season of the hit TV show vigorously balancing career and family, demonstrating she is a passionately driven woman controlling her own destiny. 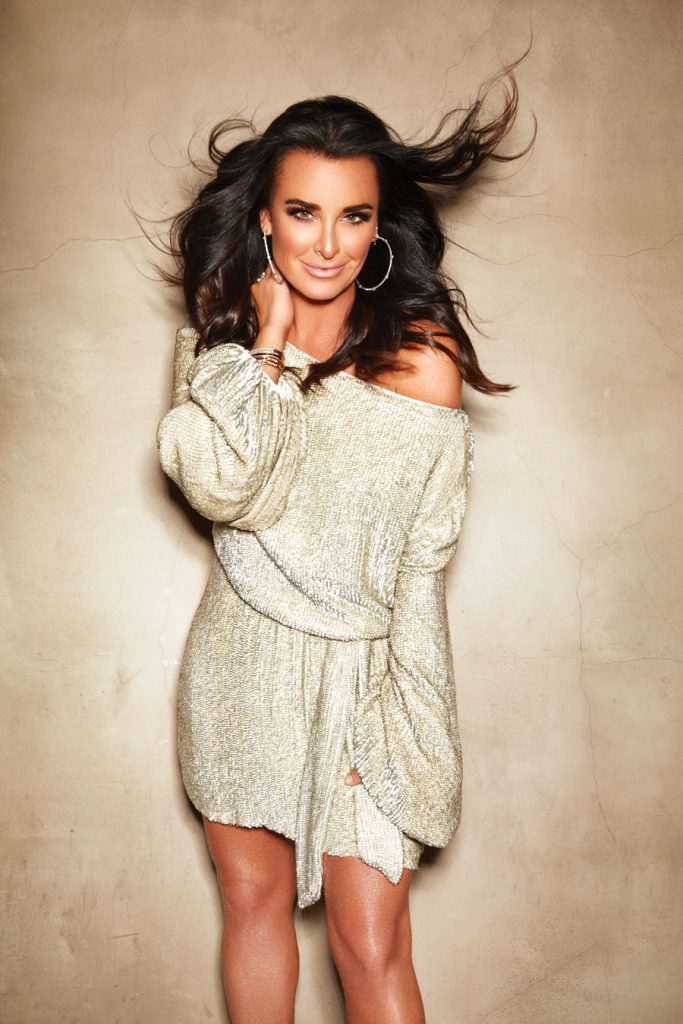 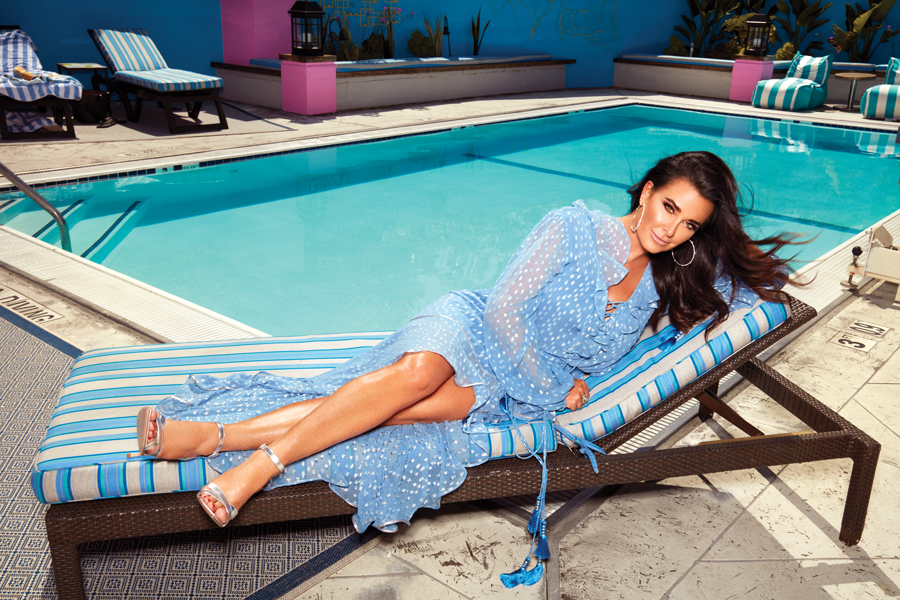 When we return back to the modish Melrose conference room that is being used as our green room located on the 2nd floor of the Beverly Hills luxury hotel, Kyle reveals to me that it’s strange she is still not speaking to her longtime friend, the only other remaining original housewife on the show. “If Lisa does something wrong, it is very hard for her to own her behavior because she is a perfectionist and wants to be perceived as being perfect all the time.”
Kyle’s friendship ended with her co-star the moment she was kicked out of the Vanderpump’s home by Lisa and her husband, Ken Todd. When asked if she regrets going to Lisa’s home the day of the epic dispute, Kyle responds, “I don’t regret going there because when the other ladies and I had this conversation, I felt so bad because Lisa wasn’t there. I had to be honest about what was going on, and if I didn’t say anything to Lisa, she would have seen the show in six months and thought everyone was talking about her behind her back. So I went to her house to give her the heads up and tell her that this is how everyone felt, but then it all blew up.”
As we conclude our photo shoot on the Sofitel’s extraordinary helipad which features breathtaking views of the Santa Ana Mountains and the iconic Hollywood sign, Kyle reveals how the issues her mother faced impacted her growing up. “My mother was just trying to do the best she could. She made mistakes as we all do. When we were growing up, my mom said to me, “I didn’t know anything. Your dad handled everything, and then when I got divorced, I had never written a check, I never paid taxes, and I don’t want you girls to ever be like that. I want you girls to take charge of your own lives.” Kyle begins to laugh as she recalls, “When I was on hiatus we would get unemployment checks and my mom would let us keep our checks and put them into our checking accounts and I would have to balance the checks myself! My mother wanted to teach me about balancing and budgeting and being independent.”
“My mom pushed me into acting to overcome my shyness. So honestly when I did anything, for example when I would pull into Warner Brothers to film American Woman the guard would wave to me, and as I would drive through, I would think, “Thanks Mom.” Because I know that everything that she did has led me to where I am now ­— Housewives, producing American Woman and these other projects are all because of my mom!” 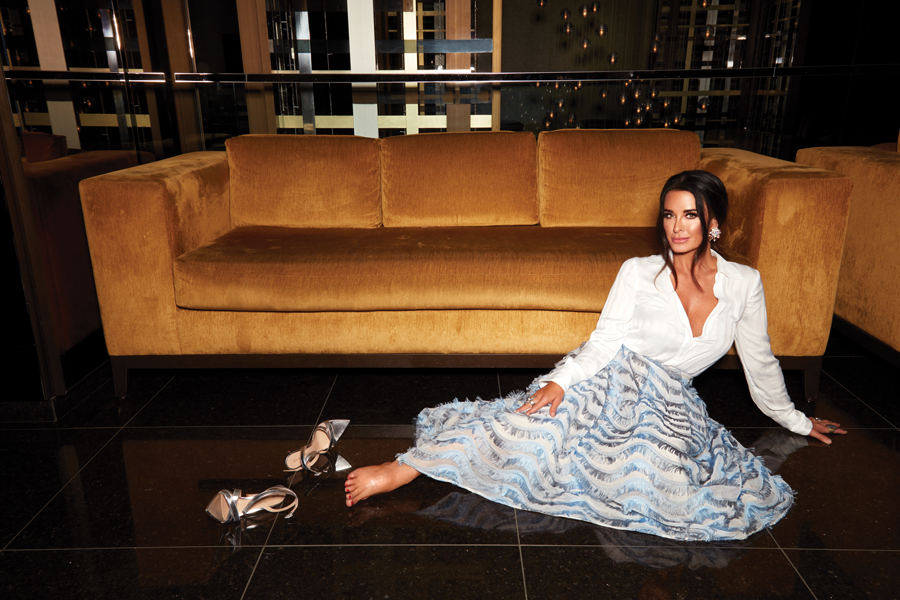