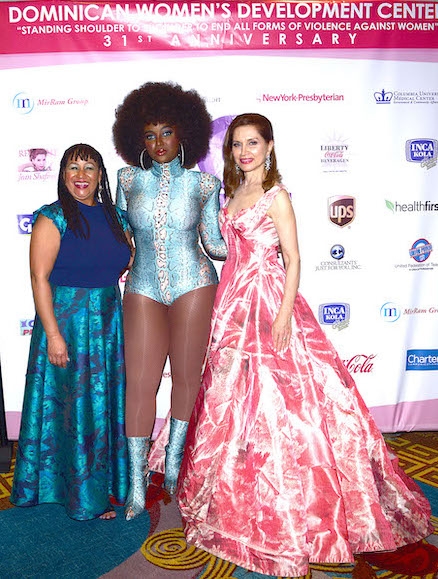 The Dominican Women’s Development Center, the largest independent Dominican founded organization in the United States, held their 31st Anniversary Gala at the New York Hilton, where they honored actress, dancer and performer, Amara La Negra with the Outstanding Artist Award.

Mistress of Ceremony, Damaris Diaz, of Univision opened the gala with this year’s theme “Standing Shoulder to Shoulder to End all Violence Against Women” a re-affirmation of one of the most critical aspects of the feminist movement and one the Dominican Women’s Development Center has embraced from the start. The gala raised hundreds of thousands of dollars to help fund the centers diverse programs for Latina women and families of the Washington Heights community.

Gala Chair Jean Shafiroff introduced Rosita Romero, DWDC’s Executive Director, who received a standing ovation for her 28 years of service to the Washington Heights community. Mrs. Romero gave a moving speech and asked guests to observe a moment of silence for women such as Gladys Ricart who was killed by a former boyfriend on her wedding day. Following her speech, she played a moving video from the Brides March Against Domestic Violence, which takes place annually to commemorate Gladys and all victims of domestic violence.

An auction was then held where people bid on luxury handbags including one by Oscar de la Renta, vacations and artwork, and signed baseballs by baseball greats Carlos Beltran and Bernie Williams.

Amara La Negra closed the gala with a heart stopping performance which had the entire room on the dance floor.