Let’s face it: Few surprises are left in the Caribbean. Sure, there’s no shortage of beauty, and just how lucky are we to be in such close proximity to literally dozens of the best beaches in the world? But, don’t you sometimes yearn for something off the beaten path and somewhat undiscovered? 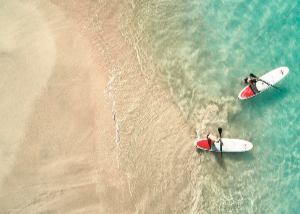 That diamond these days is Grenada. If you’re a history or politics buff, you’ve heard of its complicated and bloody coup in the early 1980s, followed by a U.S. invasion that quickly restored democracy. Locals don’t dwell on that unfortunate episode anymore. In fact, their focus these days seems to be on something much more hospitable: island visitors.

Dubbed “Spice Isle” because of its renown as one of the world’s most prolific suppliers of nutmeg, Grenada, one of the beguiling islands in the West Indies, is situated just 500 miles northeast of Venezuela. The heart of the island is its capital, St. George’s, where colorful homes, Georgian buildings, a world-class medical school, and early-18th-century Fort George overlook the narrow Carenage Harbor.

Unlike most of its Caribbean kin, this sovereign nation is on the larger side and wows with its varied topography. In a matter of minutes, you can travel from a pristine beach to a mountainous jungle awash with exotic flora and fauna. Here’s a pro tip: When visiting, opt into a full-day private tour. It will set you back a whopping — get this — $80. You’ll see monkeys, waterfalls, giant bugs, petroglyphs, and other fascinating attractions, making Grenada more of an adventure than your typical island getaway.

Speaking of things that wow, Grenada upped the ante big time in 2018 with the opening of Silversands Grenada, arguably one of the most exquisite resorts in the region. Located on the iconic Grand Anse Beach, the luxury property is both close to the airport and any other amenity you require, and yet it’s a complete world away from it all.

Silversands Grenada boasts the longest pool in the Caribbean at 100 meters. Okay, we won’t dwell on that accolade because, while it definitely is a grand centerpiece, it’s but one of many reasons to visit.

Here are our top three other reasons.