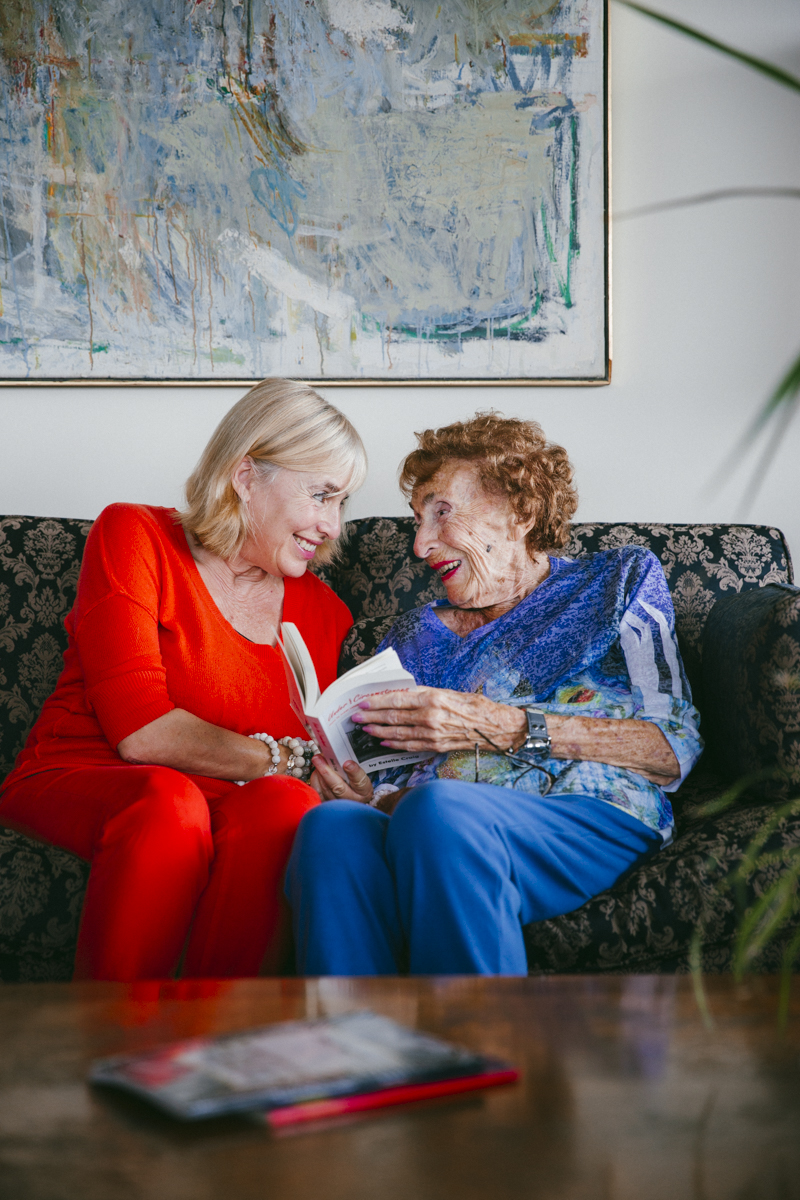 Filmmaker and philanthropist Robin Leacock spent years recording her aging mother, Stella. Her mother was, after all, “a real character.” She enjoyed the music at her seasonal senior residence in Palm Beach and had great friendships. She wrote prolifically, producing two books in her 90s and five more after age 100. She was opinionated to the end, and in her younger years, she had been a radio host, newspaper columnist, and organized lectures with the likes of writer-traveler Lowell Thomas and the Duke of Bedford. Leacock says that she couldn’t resist capturing her mother’s joie de vivre on camera.

That footage is now available for everyone to enjoy via her new documentary “Stella & Co: a Romantic Musical Comedy Documentary about Aging,” which will air on PBS New York (WLIW) at 10 PM on July 22nd.

A Passion For Giving

“When we lost my father, I decide that I wasn’t going to abandon my mother in her old age,” says Leacock, who splits her time between Sag Harbor and Palm Beach and has directed five films, including “’It’ Girls,” “A Passion For Giving,” “Stella is 95” and “I’ll Take Manhattan.” “So for the last 17 years, I hung out with my mom. She always had an extraordinary love of life and she was so full of spirit and charisma.”

But what started as home video quickly escalated into something much bigger. Private conversations spent between mother and daughter were becoming a story with a universal message.

“I started videoing her because she was so funny,” says Leacock. “It was hilarious. But I ended up with so much footage of her that I decided to bring in a professional cameraman and interview other elderly people, her friends, who I thought were really cool.”The resulting film — whose star, Stella, passed away at 103 last year – is lighthearted and funny, when it isn’t touching, with a heavy dose of musical favorites courtesy of the talented musicians that frequently entertained the residents at Stella’s home.

“We interviewed a poet, a man who basically invented the contact lens, a women who did top-secret work at NASA and a couple who had fallen in love in their late 80s,” says Leacock. She adds that what particularly struck her was how at odds the true lives of the elderly denizens of her mother’s apartment building were with the bleak assumptions many of us have about aging.“I wanted to know more about aging, and what I immediately found was a community of really interesting, cool people,” she says. “It was proof that no matter how old you are you can still be stylish and amazing.”

The characters in the film are certainly larger than life, but documentary fans will also be interested in the film’s connections to cinema greats. Leacock’s father-in-law is none other than Richard Leacock, the documentarian who is among the few to invent Cinéma Vérité and filmed practically all of the 20th-century’s most fascinating people. Her husband is director and cinematographer Robert Leacock, the man behind Madonna’s 1991 documentary “Truth or Dare,” to name but one of his many credits.

Perhaps it’s unsurprising then that a film about the brighter side of aging, which is so intentionally light, watchable and amusing, would at the same time have something so important to say in this world moment. The global Covid-19 pandemic has put the elderly at incredible risk. Nursing homes are being devastated even as families are quarantined apart. And Leacock’s film gives us reason to pause and understand just what it is that we are losing.“It’s an important time to pay respect to those who have paved the way for us,” Leacock says of the pandemic. “The reality is that a lot of elderly people have been abandoned and don’t have a lot of contact with people. That’s not a generalization. Other cultures venerate their elders and we tend to toss them aside. I feel that the attitude our society has about older people is pretty much the same kind of stereotyping that people of a particular race or gender face.”Leacock recalls her mother’s annoyance at the amazed remarks she frequently received about her ability to walk, talk or even know what day it was.“By abandoning our loved ones, it’s us, the younger people, who are losing out, because I know that I’ve had such a fabulous time with them,” says Leacock. “I miss a lot of them, and I certainly miss my mom.”

All Life Is Precious

Leacock adds that she hopes her film will remind viewers that “all life is precious” and that old age is a very special time.“Maybe you do become a little less functional,” Leacock laughs. “But you become so much more brilliant in other ways. I think if people took the time to invest in shared moments with older people they would realize just how rewarding it is.” stelladocumentary.com