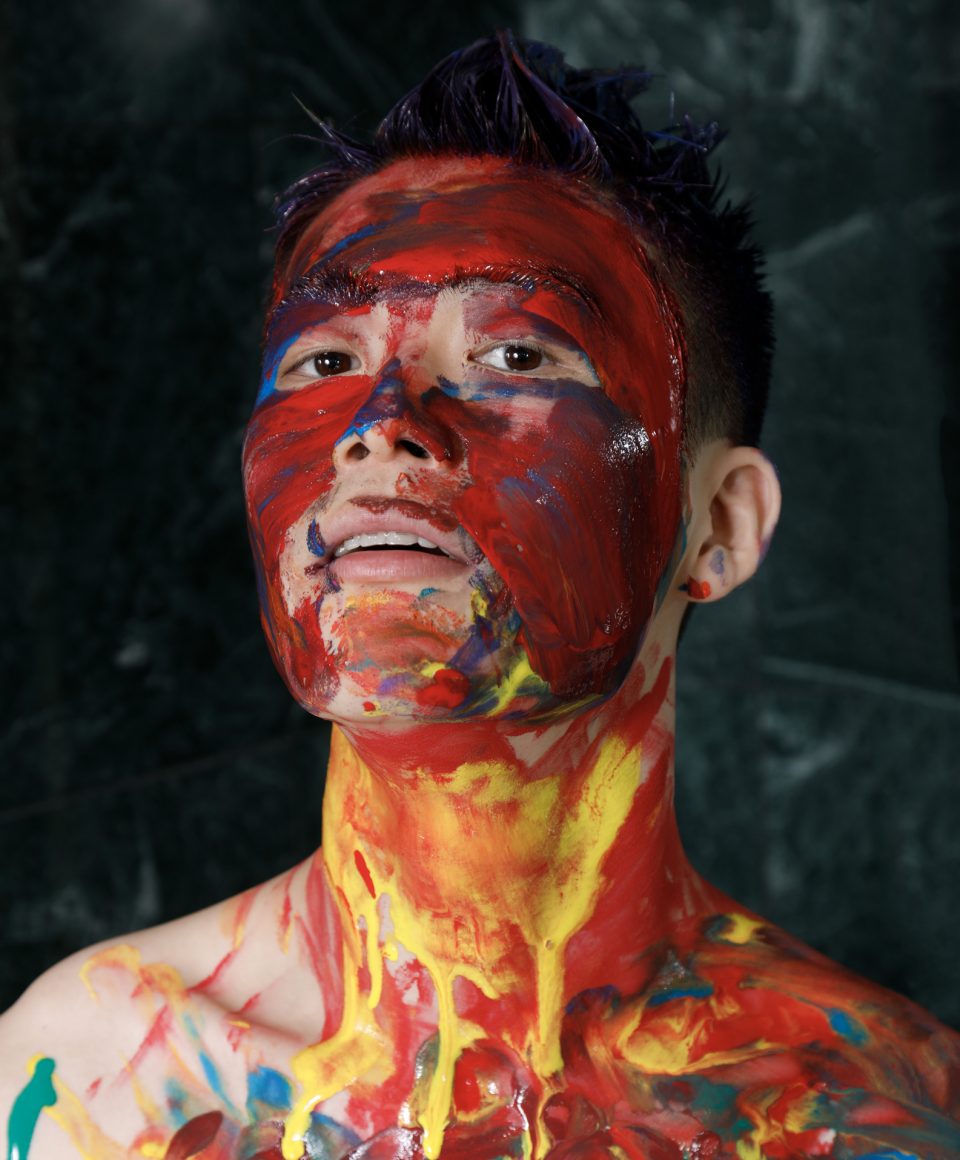 His art has involved creating an avatar of himself, blending American modern culture with ancient Chinese Yin-Yang philosophy, and portraying the virus crisis and social unrest.

He is Linjie Deng, a notable exception among the big names in Chinese contemporary art.

Linjie works in multimedia — Chinese ink, acrylic, newspaper, and canvas — and is known for his surreal depictions of how Eastern and Western cultures react in entirely different ways on the same issue. As a visual artist, his rise to prominence at a young age makes him stand out among emerging artists across the globe, especially since throughout history, many young artists from an Eastern background have often been overlooked, or recognized only belatedly, in a field dominated by Western artists.

The distinction between Western and Eastern art does not concern Linjie. “I never think about it,” he said in a recent interview.

Linjie was born in 1992. He left his home in China in 2015 to pursue a master’s degree in fine arts at the School of Visual Arts in New York City and has lived in NYC ever since. Linjie’s upbringing in a large fireworks family business in Shanxi Province helped form his compelling visual language of bold colors, vibrant abstract forms, and autobiographical cues, leading to solo exhibitions at institutions including the Hamptons Virtual Art Fair, Dream Tattoo calligraphy public show, and the New York Con Artist Collection.

In his recent work, Linjie pays careful attention to narrative and interaction. He believes art can rebuild a beautiful world after COVID-19 — and he feels compelled to be a part of this moment.

1. Why was your virtual art show named Chameleon 2020?

2020 has thrown New Yorkers so many curveballs: a virus crisis, stay-at-home orders, curfews, economic uncertainty, and national social unrest. I have been here in New York to witness this fast-changing, unique period. I have observed how people can — and do — adapt their lifestyles to address a crisis. This resilience is a survival technique also used by chameleons. So, the theme of my solo exhibition: Chameleon 2020.

2. What was the inspiration for your COVID-19 series and Yin-Yang series?

My art is not only about beauty but also about communication. In the COVID series, I portray the messages of effective protection information alongside my deep love of New York.

In the Yin-Yang series, I created contemporary calligraphy works consisting of four sets of mutually opposing and coexisting words: freedom and hope, proud and humble, me and you, me and we. For the calligraphy characters, I utilized 5 different styles of Chinese Calligraphy fonts from 10 different time periods. I chose the particular characters for their beauty and style.

I chose the word pairings because each set of words evokes diametric approaches to today’s relevant issues. For example, face masks: individual rights v. protection of society, or, to compare cultures: Western Individualism v. Eastern Collectivism. So, I put the two different kinds of “reactions” in each Yin-Yang symbol.

3. In the United States, we have heard so many times: “Make America Great Again.” What is the meaning of your series: Make America United Again?

This series is directed to the Asian American community. As a Chinese artist in America, I hope that they can be a real part of the healing process. I have chosen to incorporate traditional Chinese Calligraphy art in combination with English language newspaper articles as a way to send a message in an artistic form that Asian Americans can readily identify with. At a moment when every message of healing is important, I’d like to inspire everyone, Asian Americans in particular, to join this movement: Make America United Again.

Explore the Key to Artworks with Linjie

I usually arrive at my studio at 10 a.m. and work until 8 or 9 p.m. If I am in the studio at night, I read and write notes. I find it helpful to reflect on my work of the past day, as well as the day’s events.

2. When you start a new piece, where do you begin?

I define my works as conceptual art. In conceptual art, the idea or concept is the most important aspect of the work. When I begin a new piece, all of the planning and decisions are made beforehand and the execution is an affair. The idea becomes a machine that makes the art. All the steps in the process are of importance. The idea itself, even if not made visual, is as much a work of art as any finished artwork. All intervening steps — scribbles, sketches, drawings, failed works, models, studies, thoughts, conversations — are of interest. The steps that show the thought processes are sometimes more interesting than my final artworks.

3. How do you know when you’re done with a painting?

I don’t think about a specific finish point. But I have a high personal standard for my artworks. I am finished when I am feeling super comfortable showing it to the public.

4. For the virtual art show, people only can view it online. Do you still keep the same standard?

Yes, of course, the standard of quality remains the same. For example, one day I totally lost my temper because the piece needed to be painted on white newsprint. Just to be safe, I found at least 30 different kinds of this material. Believe it or not, every single one was a different shade of white, and none were the white that I envisioned! Such things can make me crazy — even the small details, ones most viewers wouldn’t be able to distinguish until I pointed them out.

As to the virtual viewing, there is a very complicated additional step in displaying your artwork. Photos of the piece must be taken and the piece has to been seen in the virtual show in the exact same way that you would want it seen in person. And this can take hours and hours, just for one piece. You really won’t know if it meets your standard until the photo you have finally chosen is then test-placed on the virtual site. So, for my recent Hamptons show, this resulted in dozens of hours of work.

5. As an artist, what are your thoughts on virtual v. gallery shows?

I would rather not have a specific boundary between online and offline, virtual and physical. The beauty of my virtual art show is that it’s a global exhibition, and accessible to everyone at any time. My art show is virtual, but the power of my art is real. My virtual art show and Instagram accounts link up to each other so that I can really start a global dialogue. Making sure that we have a diverse group of voices is incredibly important to me at this time. I’d love to do more art shows online.

1. Do you worry about the comments of the audience about your artwork and you?

It doesn’t really matter if the viewers understand my concepts when they view my art. Once it is out of my hands, I have no control over the way a viewer will perceive the work. Different people will understand the same artwork in a different way. For example, my Yin-Yang Series artwork has evoked reactions across the spectrum.

I think artists are artists. I don’t like the label of “Chinese Artist.” I hope my audience can remember me in the future by what I did, not where I was born 28 years ago.

2. What do you wear when you work?

3. After COVID-19, would you mind doing an open studio while you paint?

Generally, I wouldn’t let anybody watch me paint. I don’t want to be conscious of myself. I think it would be like somebody watching you have sex — painting is that personal to me. That is why I don’t enjoy doing live shows on social media, even when it is necessary.

When someone tells another person that they should Google me. And … nothing shows up.

I hope soon! I am currently working on a new project for a group show of SOHO New York.