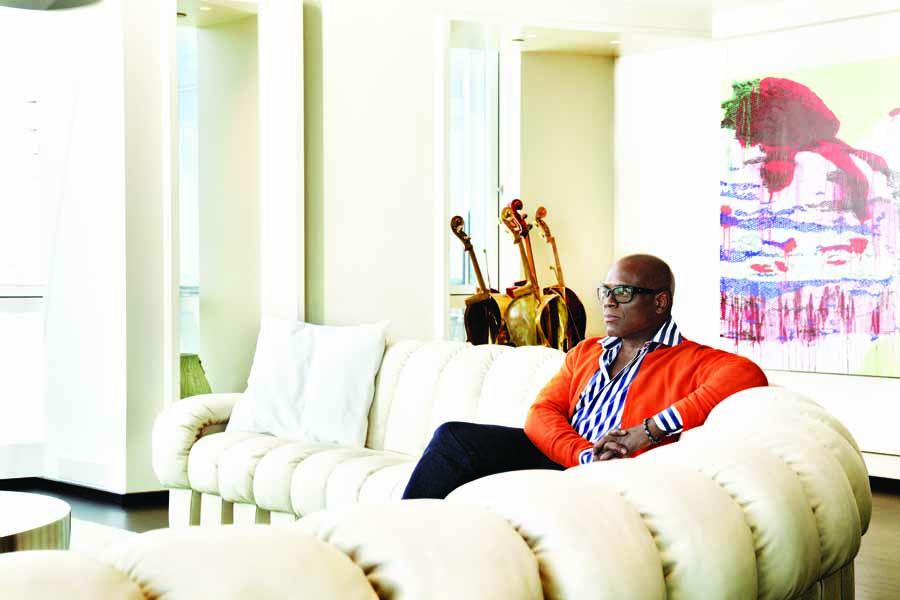 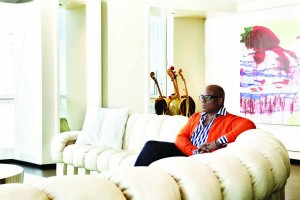 Antonio “LA” Reid has too many career highlights to pick just one. But when asked which moment has been the most memorable, he immediately described how proud he was to accept the album-of-the-year Grammy for the musical group Outkast. He glowed in the memory, then smiling even wider, told of the time that Kanye West and 50 Cent went head to head by debuting their albums on the same day. West, with whom Reid has worked for years, was sitting in his office when the results came in and Jimmy Iovine called to congratulate Reid. What did Mr. Reid do? He passed the phone to Kanye.

Both mogul and prankster, Reid paused and said to me, “Wait one moment.” He left the office and came back with a large award for a Justin Bieber film he produced that reads “Most Successful Concert Movie of All Time.” He laughed, not taking it too seriously. There is an ease and coolness about him. And he has a genuine openness that’s unique — as if he’s reliving these moments every time he tells his tales. He brims with passion for what he does and when asked to talk about himself, he immediately described the journey, his artists, and his passion — not himself. Where I expected an ego, I instead encountered a man still inspired daily by what he does. “My work isn’t finished yet,” he told me, explaining that he has so much more to do.

But before we get to Reid’s next steps, it’s important to shed light on the beginnings of this prodigious star-grower. Reid started out as a musician and he confided that his life changed when he joined forces with creative partner Kenneth “Babyface” Edmonds. They produced, managed, and wrote together. The two became a prolific songwriter-production duo and in 1989, through a joint venture with Arista Records, founded LaFace. The label worked with such stars as Toni Braxton, TLC, Outkast, Pink, and Toni Rich. Reid also signed a young entertainer whom you may have heard of. “I discovered Usher when he was fourteen and Usher discovered Justin Bieber when he was fourteen,” Reid said, describing the 360-degree journey, a perfect circle.

Likewise, Reid’s life has also made a professional full circle — moving from behind the camera to being once again in front of it. He described the difference between the two worlds as, “The camera looks right through you and behind you. It’s all the same to me. The only difference between doing television and sitting in my office is profanity. I say what the *&%$ all I want in my office.” And then it came: the unaffected laughter and genuineness that made me see again why this megastar and star maker is truly just a down-to-earth fun person with whom I could have a great laugh. On set Reid is exactly the same. During filming of The X Factor, he said the judges play practical jokes on each other and he described Demi Lovato as his “BFFL” and Britney Spears as his “bestie.” He is also protective of his co-judges. “What people don’t see about Britney is that she really has an amazing taste for talent. People dismiss that you can also have great taste when you are a pop star. Let me tell you something, you can’t be a pop star for this long without having taste and talent.” The secret ingredient that makes The X Factor such a success is, according to Reid, “Simon Cowell. He is funny, has magnetism, and impeccable taste.”

We paused from chatting the afternoon away to watch one of Reid’s artists, Future, premiere a new music video on BET’s 106 and Park. Whether it’s working on The X Factor or as a record executive, it’s obvious that Reid is passionate about discovering and mentoring talent. While watching his artist on the screen, Reid rocked back and forth to the music, losing himself for a moment in the sound, full of pride but also admiration. This man loves his job and loves the people he works with even more. “I am in awe of superstars,” he confided. “I am now and always have been and always will be. I love superstars.” What they are is everything he loves to discover and develop. He loves doing what he does and plans to keep doing it “until I pass the f$&@ out. There is no expiration date. I love what I do.”

When I walked out of LA Reid’s office, I felt uplifted. He has an infectious positive energy that makes a person feel as if anything is possible. Personally, I can’t wait to see what’s next for this history maker who feels that his job isn’t done. The world is waiting in anticipation of the next iconic act he will bring to bloom.