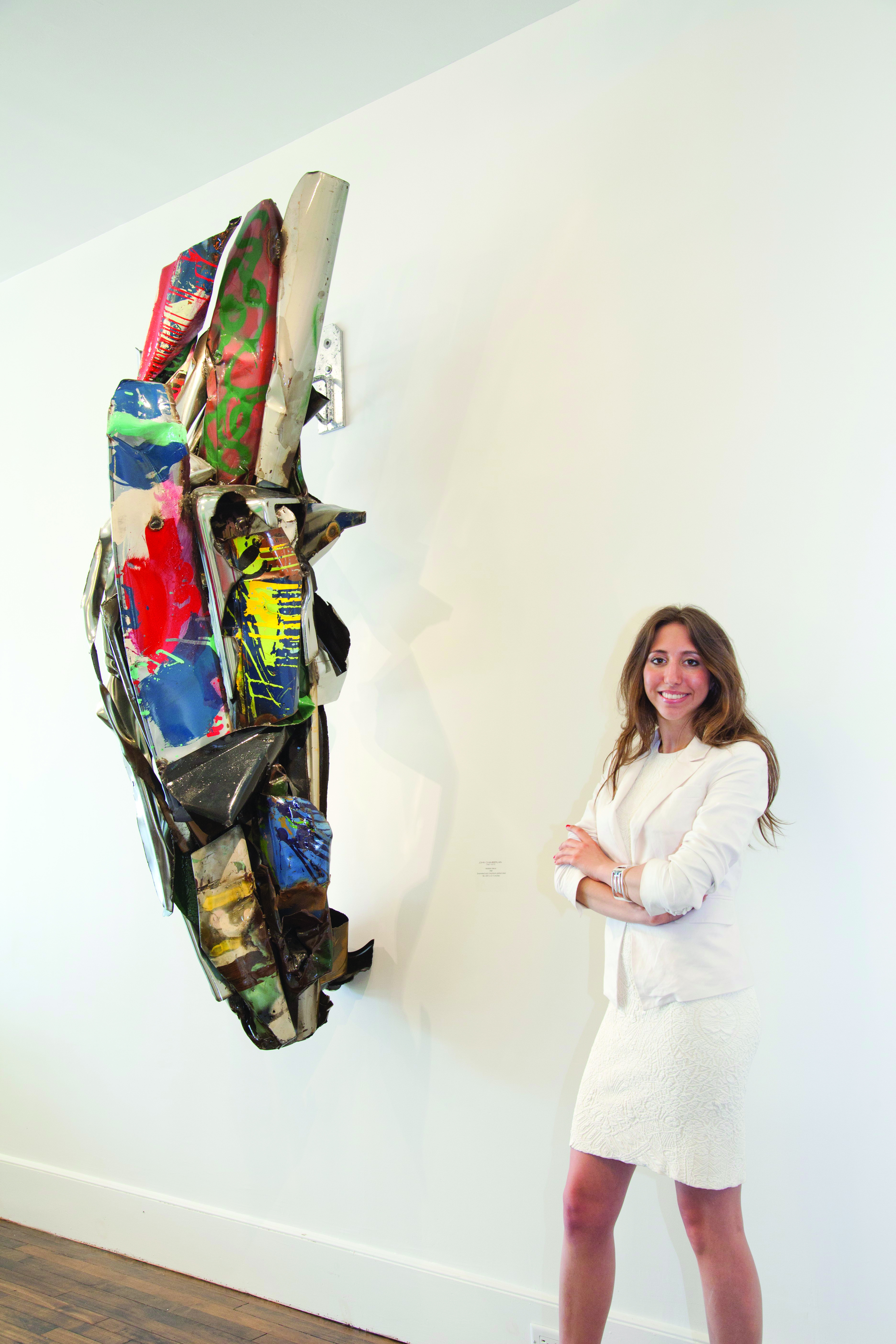 Hot. Hot. Hot. Hot summer galleries. And it’s only June. It’s the beginning of the season for sweet corn at your favorite farm stand in Watermill, for lessons at Flying Point Surf School on Gin Beach, for yacht parking by the waterfront porch of B. Smith’s in Sag Harbor, and for private boat chartering, whale watching, and late night trophy fishing in Montauk. It’s also the beginning of the season for the art galleries.

The big news is in Bridgehampton. I’m in a good mood, so I won’t name the names of a number of very jealous rivals. The question: So why did Gallery Valentine open a second location? Todd Hutcheson, curator and director of the new space, told me that “Gallery Valentine had such a tremendous response last summer that this year we decided to open a second space as our ‘Project Space,’ where we will have five curated, thematic exhibitions that will change throughout the summer. We wanted to use the space in Bridgehampton as a laboratory to exhibit the work of emerging and lesser known artists juxtaposed with better known artists of the last century, and artists who have lived and worked or currently live in the Hamptons. Our immediate response to the new space has been overwhelmingly positive.” The ground-floor space opens onto a boxwood courtyard onto the center of Main Street. The gallery is minimal — all white, with bleached wood floors.

Valentine’s first exhibition, “Beached,” runs through June 18. It surveys diverse artist responses to the beach, the ocean, the environment of the ocean, and the nostalgic representation of the memory of ocean and seacoast. Artists include Eric Fischl, Isca Greenfield Sanders, Darren Almond, Milton Avery, Spencer Tunick, and Ed Ruscha.

Meanwhile, back at the original Gallery Valentine in East Hampton, director of the gallery, Alexandra Fairweather, explained this season’s highlights, which “will include once again exhibiting and selling top-quality masterworks of modern and contemporary art.  We kicked off our season on Memorial Day weekend with a group show of new acquisitions by Helen Frankenthaler, Robert Motherwell, Alex Katz, Jim Dine, Willem de Kooning, George Condo, and Frank Stella.”  The East Hampton Gallery Valentine will host the opening reception for Art Southampton on Saturday, July 7 from 6 to 8. As the summer progresses Gallery Valentine will announce other shows. The gallery’s focus is once again on two areas, Abstract Expressionism and Pop Art.  The Gallery will be unveiling major works this summer that have been acquired privately.  Some of the most major works are by de Kooning, Frankenthaler, Warhol, and Lichtenstein, and a unique show solely of the works of John Chamberlain, said Fairweather.
Gallery Valentine also will host the opening of Art Hamptons, July 13 through July 15, with a special exhibition of John Chamberlain sculpture.

RVS Fine Art in Southampton closed its doors for the first summer in 34 years. Owner Roberta Von Schlossberg will be celebrating her new freedom by globe-trotting and enjoying life. No longer on Main Street, “The Keszler Gallery will host several events throughout the summer at its 200 North Sea Road location, featuring such artists as Marco Glaviano, Banksy, Russell Young, and Peter Anton,” said Nicole Benson.  Keszler Gallery’s primary location on Madison Avenue in New York City just hosted Glaviano’s “Supermodels” exhibition, and paparazzi jammed the streets to get a glimpse of Janet Jackson, among  the Italian’s many glamorous admirers.

Tripoli Gallery on Jobs Lane in Southampton, undaunted by its steadily disappearing  neighbors, will begin the season with high standards. Its solo summer exhibition, “ZnO,” will be co-presented with Pace Gallery, and will feature new paintings and sculpture by Mexican artist Bosco Sodi. It  opens on July 14.  “For me the artist’s work is slightly out of this world. Very surface and textural work. Kind of removes you from this time and age. Almost like traveling to the moon,” said gallery owner Tripoli Patterson. “It’s our first collaboration with Pace.  The show gives a younger and upcoming gallery an opportunity to learn from a gallery that I have admired for years.” Tripoli will follow up with a solo exhibition of Lola Montes Schnabel’s new paintings.

Sag Harbor has become a destination for serious collectors. The Richard J. Demato Gallery is having a banner year, shipping work to collectors in Amsterdam, Canada, and London, with May sales alone rivaling all of last year’s. The gallery’s unique approach includes a commitment to donating a major portion of its proceeds to non-profit causes, including The Retreat, The Southampton Animal Shelter, and Fountain House in NYC.  “Emerging artists. Young artists. We like their work. High integrity. No monkey business,” said Richard Demato. The Gallery is committed to seeking out and showing the work of emerging and mid-career artists with a focus on narrative figurative portraiture, American Magic Realism, mixed media, and contemporary landscape. This summer’s roster includes an impressive group of artists, including Andrea Kowch, who has a 36-person waiting list to purchase one of her paintings. The 26-year-old Kowch was just named one of the “top 100” emerging artists in the world in SCOPE NYC’s Artists Wanted: Year in Review 2011 competition.  Her painting Sojourn was recently acquired by the Grand Rapids Art Museum. Demato also represents Donato Giancola, most famous for his Lord of The Rings characters. George Lucas is one of his biggest collectors. June 23, from 6 to 8, will be the opening a the Dan Vanlandingham show. The Richard J. Demato Gallery will also participate in ArtHamptons and artMRKT Hamptons.
Of course it gets even hotter in July.

“Certainly ArtHamptons is about great art. With over 4,000 significant works to choose from, it’s the Hamptons largest ever. It’s an artgasmic and artrageous experience. We expect 15,000 art lovers. They come to see and be seen,” said Rick Friedman, founder and fair director.  ArtHamptons will be followed by artMRKT. Max Fishko, director of artMRKT said, “We’re very excited about this year’s artMRKT Hamptons. The response from galleries, guests, and local enthusiasts has been overwhelming. It’s going to be an amazing few days!”