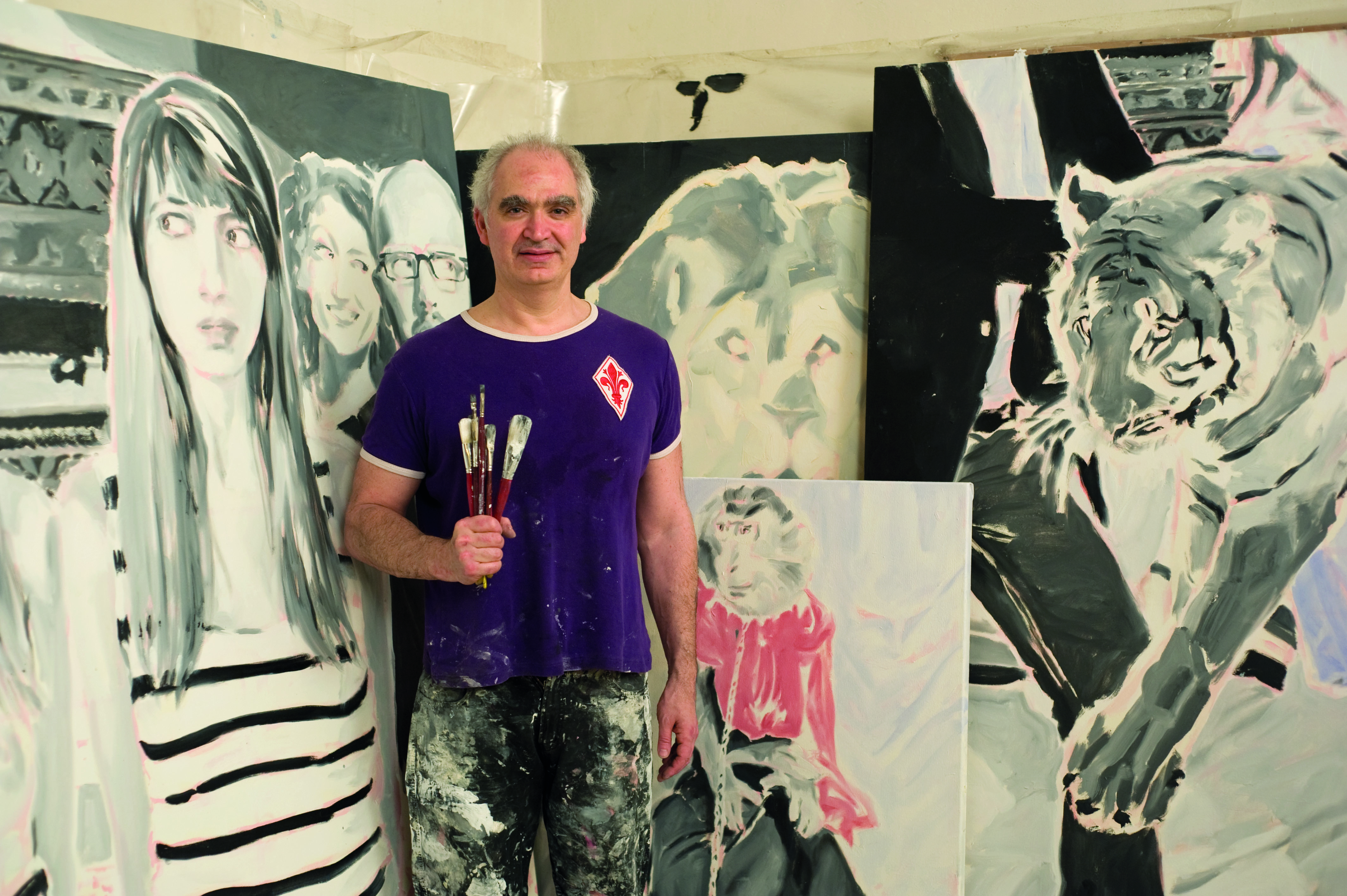 GIOVANNI ROSSI: You’re an artist who works in many forms — painting, sculpture, performance art, and video. Is writing an art column something new for you?
KEVIN BERLIN: I started writing for Social Life last year. I’m also working on several books. I wanted to get readers behind the scenes, in the studios, meet the local gallerists. Hopefully give readers a chance to slow down for a moment and look at the art itself. In short, a column that I would like to read myself.
GR: You’re best known for your mostly black and white paintings of cocktail parties and backstage at the ballet.
KB: I paint a lot about people’s secrets. There are some things you would never tell your mother, you would never tell your best friend, but you might tell a stranger on a train. Or you might tell me. And I may put you in a painting. The artist is like a journalist, like a witness. I don’t tell you if it’s good or bad, right or wrong, just that I was there and this is what I saw.
GR: Your latest painting series and performance art “Tiger Training For Beginners,” was just presented on opening night at ArtHamptons. So what’s all this talk about tigers? Are they really going extinct?
KB: There are only 3,200 tigers left in the wild, and their numbers continue to decline. There are only 10,000 tigers in captivity. The tiger faces extinction. The “Tiger” exhibition was inspired by my experiences working with tiger and lion trainers at the Ukrainian National Circus in Kiev. I decided if I was ever going to say something important about tigers, I better get to know some tigers first. Over a period of three years, I created over one hundred new works. The oversize oil on canvas paintings also explore the idea of tigers in contemporary life, such as tigers at a cocktail party, tigers in your house, and the type of tigers that inhabit the deep interior of the mind. I hope the paintings will encourage viewers to take action and get involved in a movement to protect the global population of tigers. The show just started its world tour: London, New York, and Miami, with Kasia Kay Art Projects Gallery.
GR: So while we’re talking, tigers are dying. What can be done?
KB: Well, a lot is already in place. Two years ago President Vladimir Putin of Russia organized what is known as the Saint Petersburg Tiger Summit. The leaders of all thirteen countries that still have tigers attended and came up with a series of ongoing protocols and resolutions. The goal is to double the worldwide population of tigers by 2022. The actor Leonardo DiCaprio donated one million dollars toward the cause. Groups like the World Wildlife Fund, The Zoological Society of London, and Save China’s Tigers all are involved in outreach. Google “save tigers” and decide where you can help most.
GR: You had recent solo shows in London, Kiev, and Shanghai and have works in the private collections of such notables as Kim Basinger, Luciano Pavarotti, and Bill and Hillary Clinton, to name a few. Do you have a favorite project?
KB: My favorite is always what I’m working on now. This summer in Sag Harbor I’m working on my first major bronze equestrian sculpture. Then back to my studio in Florence, Italy.
GR: What’s next?
KB: Well, “Tiger Training for Beginners” goes to Art Miami and Context. I’m also working toward an exhibition called “UNCENSORED,” which will be shown in New York City. I will stop being polite about sex, politics, religion, death, and all the bad words your mother never would have allowed you to say.