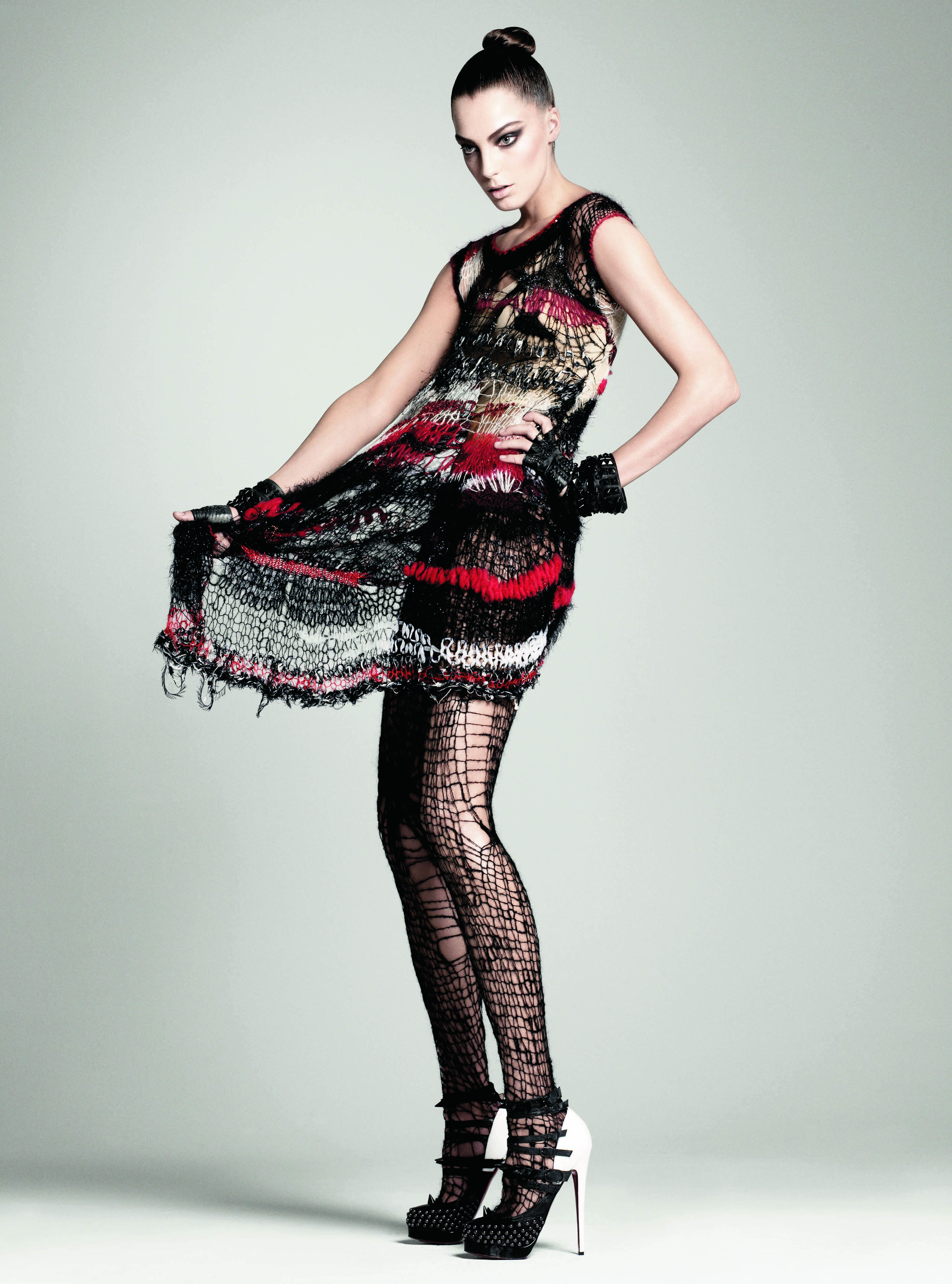 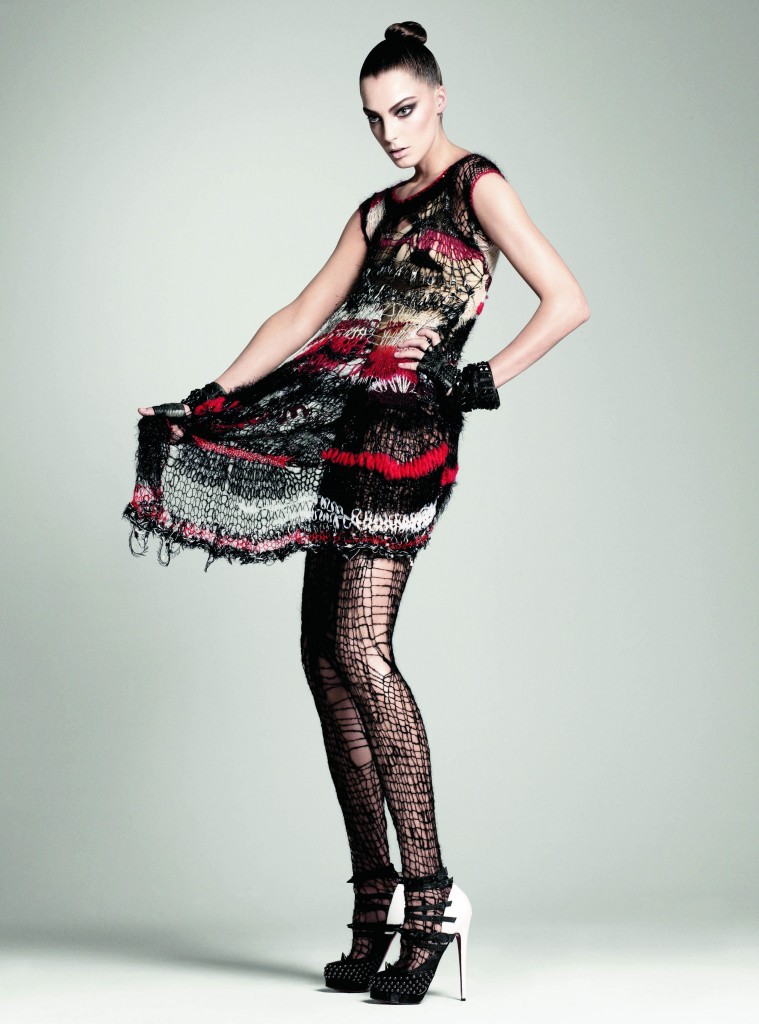 CHAOS: “a state of things in which chance is supreme; the inherent unpredictability in the behavior of a complex natural system (as the atmosphere, boiling water, or the beating heart; a state of utter confusion; a confused mass or mixture.”

COUTURE: “the business of designing, making, and selling fashionable custom-made women’s clothing; the designers and establishments engaged in couture; the clothes created by couture.”

Couture overcame chaos on Monday, May 6, as guests glided up the red carpet-covered steps of The Metropolitan Museum of Art and into Manhattan’s most exclusive social soirée. The famed ‘Met gala’ functions both as a fundraiser and as a celebration of The Costume Institute’s annual exhibition. This year’s benefit feted Punk: Chaos to Couture (on show through August 14, 2013), which curator Andrew Bolton describes as “an origin story of punk’s greatest and most enduring contribution to our cultural landscape”.

Designed and produced by photographer Nick Knight in collaboration with Sam Gainsbury, Gideon Ponte and Raul Avila, the opening gala was sponsored Moda Operandi and Givenchy. Powerhouse publisher Condé Nast provided additional funding. The evening was co-chaired by a trio of undisputed fashion forces and an Academy Award-nominated actress. Moda Operandi’s Lauren Santo Domingo, Givenchy’s Riccardo Tisci, and Vogue’s Anna Wintour were joined by Rooney Mara, best known for her portrayal of Lisbeth Salander, fearless punk heroine of the American version of  HYPERLINK “http://en.wikipedia.org/wiki/Stieg_Larsson” Stieg Larsson’s  HYPERLINK “http://en.wikipedia.org/wiki/The_Girl_with_the_Dragon_Tattoo_(2011_film)” The Girl with the Dragon Tattoo. Adding to the glamour of the gala was Beyoncé, named Honorary Chair for the evening.

Punk: Chaos to Couture explores the shared aesthetic vocabulary of music and fashion: the evolving and enduring relationship between punk and haute couture. “In a way,” says Bolton, considering punk’s do-it-yourself aesthetic in relation to the handcrafting techniques of fashion, “punk clothing is haute couture”.  The exhibition traces the influence and evolution of ‘punk’, from its naissance amid the grit of the 1970s music scene through to its glamorous and often glamorized re-appropriation, and expensive reinterpretation, on the runways and in the glossy pages of magazines.

The heart of punk beats loud behind the museum’s distinctive Beaux-Arts façade. Visitors to Chaos to Couture can expect to be immersed in a multisensory, multimedia experience: period music videos accentuate the visual displays and soundscaped audio techniques animate the gallery ambience. It feels almost as if this more dynamic exhibition model had taken inspiration from one of the defining tenets of punk music – the notion of breaking down the barrier between performer and audience – and applied it to the museum experience.

There is inherent in the title of the exhibition a contrast dependent on development, on regulation, on what we might think of as a kind of stylistic taming. What happens in the gap between music and fashion, between a form of liberated self-expression and of codified creativity? What happens to ‘chaos’ as it is transformed into couture? How can the liberal punk notion of ‘do-it-yourself’ be translated or transformed, by designers, into the circumscribed style ideal of fashions ‘made-to-measure’? These questions underscore the exhibition, which far from skirting the issue instead highlights the dynamic contrast – that is also a dynamic dialogue – between music and fashion through juxtaposition. The authentic is shown side by side with the ready-made: original punk clothes and accessories are displayed alongside their later couture incarnations, beside the fashions they inspired.

Over the span of seven galleries, a total of around 100 designs for both men and women are showcased in the exhibition. Organized thematically, each gallery pays homage to a punk ‘hero’ (or heroine). The protagonist in focus in the first gallery is Richard Hell, a true punk original (credited, amongst other things, with being the first to spike his hair and don ripped and torn and safety pinned accoutrements). Hell’s crusading style is placed in the musical context of New York City’s famed CBGB, an epicenter of the emergent punk subculture. The second gallery transports the visitor to London – 430 King’s Road, to be exact –, to the Seditionaries boutique, operated by the two individuals who, explains Bolton, “codified the aesthetic of punk that we know today”. The boutique was run by radical designer Vivienne Westwood and by Malcolm McClaren, who was Westwood’s partner at the time and later became the manager of the Sex Pistols. Clothes for Heroes is next, and features designs which extend punk’s symbolic lexicon in the world of fashion.

The final four galleries focus on the many and varied manifestations of the ‘do-it-yourself’ manifesto. D.I.Y. Hardware adopts Sid Vicious as its hero, and offers the viewer a dizzying array of chains, spikes, safety pins, locks, studs and the like, in both punk and couture incarnations. D.I.Y. Bricolage demonstrates how the craze for customizing and recycling materials and popular images filtered from punk into high fashion: here, Debbie Harry is the aptly chosen punk heroine. D.I.Y. Graffiti and Agitprop examines the confrontational spirit with which the punk tradition is often identified, exemplified by The Clash. Johnny Rotten, lead singer of the Sex Pistols, is the hero of D.I.Y. Destroy. By exploring punk’s destructive spirit, and examining how this fuelled fashion’s obsession with all manner of things distressed and the deconstructed, the final gallery brings The Costume Institute’s exhibition to a dramatic close.