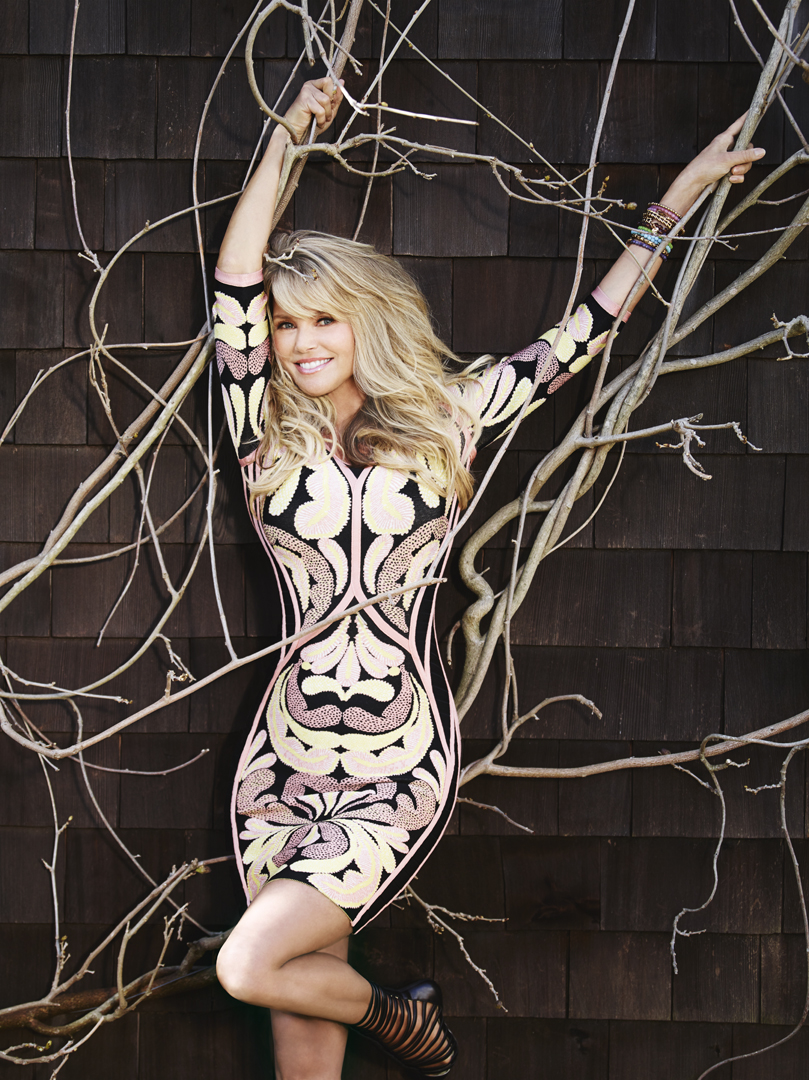 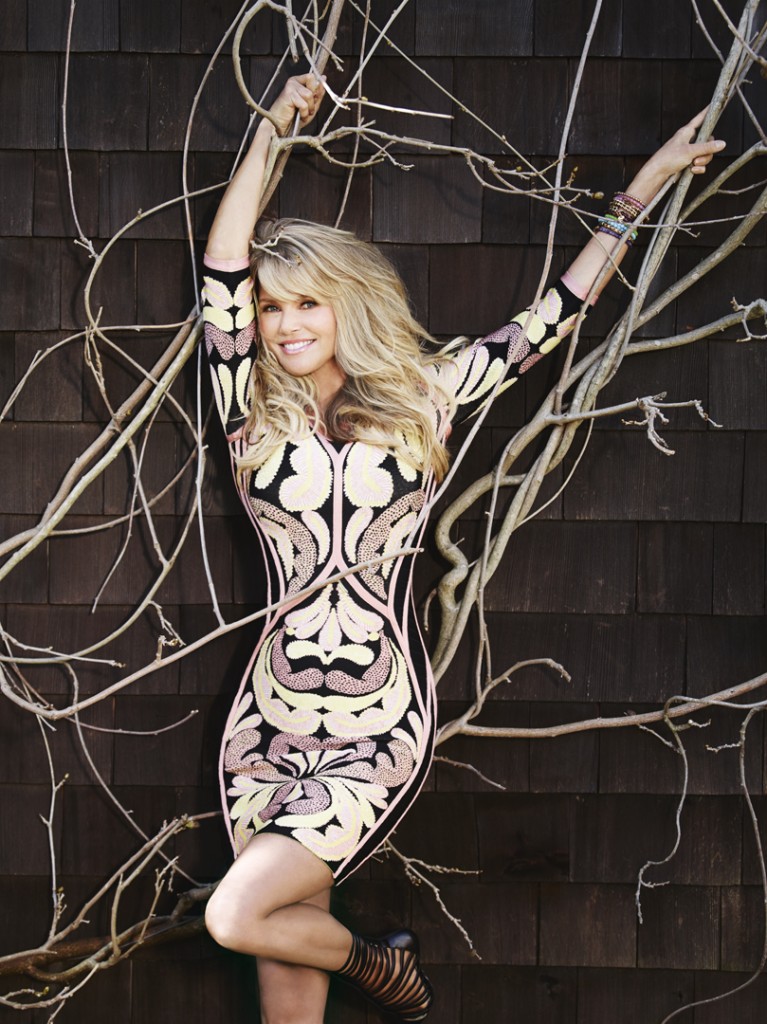 Written by Devorah Rose. Iconic supermodel, stage and screen actress, photographer, illustrator, television personality, writer, designer, environmentalist, Hamptonite, and activist for both human and animal rights. It is irresistible to state the obvious: Christie Brinkley is more than simply beautiful on the outside. In fact, she makes everything and everyone around her beautiful as well. From her tireless work with the Radiation and Public Health Project to volunteering with the USO around the world, she is dedicated to numerous charitable endeavors, proving that one legendary all-American beauty really can change the world for the better.

Despite her numerous accomplishments and the fact that one could easily fill pages waxing poetic about her many terrific attributes, a very curious thing happens when one brings up the name Christie Brinkley in conversation: incredulity.
Several years ago, upon seeing a strikingly beautiful young woman in Sag Harbor, I turned to my publisher and remarked, “That girl looks just like Christie Brinkley,” to which he responded, “Well, that is Christie Brinkley.” The mere mention of her name produces similar reactions in a multitude of different people. “She must have sipped from the fountain of eternal youth.” “She can’t possibly look as good in person as she does in photos — Does she really?” “Well, I’ve heard she eats only locally raised vegan foods.” “Maybe she’s part human, part alien.” These are just a few of the comments that buzz around the topic: how and why does Christie Brinkley continue to look so amazing?
And so, on cover-shoot day, as a hundred pounds of clothing, accessories, shoes, and an entire glam-team army roll out of New York City toward the Hamptons, I am on a mission not only to capture a radiant Christie Brinkley cover, but to glean her secrets.

When we arrive at Christie’s East End home, it’s nine in the morning. She meets us on the front steps wearing ballet flats, jeans, an oversized sweater, and not a touch of makeup. After an introduction to the team, Christie is asked what she would like for breakfast or if she would like some tea or juice— it’s a typical part of the photoshoot protocol, but I’m listening intently in case I can uncover any clues to the all-important vegan or non-vegan question.
But Christie simply says, “Let’s get to work,” beaming, and leading the way. Two little dogs, Maple and Chester, follow their mistress’s every move.

As we walk, Christie is immersed in conversation with the team while simultaneously keenly appreciative of the natural environment around her. Suddenly, she makes an abrupt stop, “Oh, hold on a moment,” she says, moving over to a newly sprouted spring flower, “I have to Instagram this!” She leans in, studying her subject intently, taking photos from every angle until she knows she has captured it perfectly. She springs up, giggles, and begins to strut once more. There is a girlish charm about her and it’s infectious. As we walk along the stone steps together, the team — which was once groggy-eyed from a five a.m. wakeup call — is all smiles.

As hair and makeup get under way, Christie’s dogs circle her ankles. Having graced over 500 international covers, photo shoots are second nature to this supermodel. Among those hundreds of covers, several of her most iconic are her three consecutive Sports Illustrated’s swimsuit issues. With a lifetime of amazing adventures, Christie confesses, “one of my most treasured memories has to be the making of National Lampoon’s Vacation because the movie was filmed almost entirely outdoors in the Wild West, which is a place I adore! I was set to shoot my indoor scene only when it rained, but it was sunny for weeks! So I went horseback riding, white water rafting, kayaking, water skiing on lakes, watched them filming other scenes, bought antique Navajo jewelry from reservations, drank margaritas with the stunt drivers and actors, and had a rootin’ tootin’ good time. I guess you could say that job was a ‘Wild West National Lampoon vacation!’ ”

And although she has certainly enjoyed her illustrious career, Christie has also used her fame to bring light and awareness to others. In fact, one of the most meaningful moments of her career was “the day I realized that this newfound ‘celebrity’ thing had a silver lining. I discovered that I could put a smile on the face of a sick child through organizations like Make-A-Wish or the Starlight Foundation, or thank a homesick soldier for his sacrifice in a far away land while traveling with the USO. I was proud that my career gave me opportunities to make a difference and give back. I am grateful for that.”

Christie has a lot to be proud of, having made an incredible transition that not many models are able to do — she not only became a film actress, but she decided to truly hone her acting chops by accepting a role in a little Broadway show you may have heard of: Chicago. Live theater is no easy undertaking but Christie threw herself into the role. She says, “I will never ever forget looking out into the audience that included my three kids and my dad all smiling and proud of me as I took my bow on opening night on Broadway. That’s a moment I will always cherish! Playing Roxie Hart on Broadway to this day still makes my sheba shimmy shake!” And when the Broadway show decided to tour the country, Christie took the plunge that true artists relish but many screen names avoid, by going on tour. Schedules on the road are known for being grueling, but Christie smiles at the recollection, “I felt myself getting stronger and stronger during the four-week intensive rehearsals. So I was ready for opening night, but you continue to grow and improve throughout the run and that’s invigorating! That said, the first week in a town is especially exhausting because you are doing TV and print all day — starting with early morning talk shows — to promote the show and sell tickets. Some days I did wonder where I would find the strength to give the audience my best. And then you get to the theatre, the orchestra starts to warm up, my fabulous beautiful cast mates filter in and laughter fills dressing rooms, and I would just swell up with gratitude that I was a part of this … and by the time the curtain goes up, it also elevates your energy and joy!”

Energy and joy are two qualities that Christie has in abundance. During the cover shoot, her enthusiasm moved through the creative team like a wave through a stadium crowd during a sporting event. She demonstrated that uncanny ability to move the energy in a room. It was truly impressive. Recently, her joie de vivre was captured alongside Anderson Cooper. Christie says, “I love co-hosting with Anderson because for a serious guy, he is so much fun! He really just wants you to be yourself, even if your self is as goofy as I am! The last time I was on it was Valentine’s Day, so I brought a ‘Valentine’s Sexy’ apron with boas for the cooking segment, and we wore heart-shaped glasses. The chef Big Daddy, Anderson, and I had a segment that had us all doubled over in laughter as suddenly everything had sexual overtones! Anderson was as red as a beet! His show is very off-the-cuff, and that makes it fun. Speaking of sexual overtones, dancing with Gilles Marini was fun. He is as sweet and nice as he is gorgeous, but unfortunately, he’s a devoted husband and dad,” she jokes.

When Christie isn’t in front of a camera, she enjoys being behind the lens. “I love to capture all the beauty of the East End,” she says. “I am newly addicted to Instagram, where I enthusiastically share my pics, and love seeing how my neighbors on Long Island see through their lenses too. There’s a lot of talent out here! I find when I walk with a camera in my hand, I am extra alert and attuned to all the extraordinary beauty that abounds, from the smallest detail of a powdery pistil in a flower to the texture of the sky and the clouds that mesmerize me. Taking pictures intensifies my appreciation and awe!” But equal to her appreciation of the land around her, are her concerns for its continued well-being. “Sag Harbor is my favorite but there is much to love about each town and the fact that each has its own character is another reason the area is so special. I hope it does not change too much more. We need to protect our remaining open spaces, and I wish everyone would realize how close we are to several old, leaky, dangerous nuclear power plants that adversely affect us from Manhattan to Montauk. [The nuclear disaster at] Fukushima has shown us what can happen. We need to band together to prevent that from ever happening here, and we should start by closing Indian Point and the Millstone nuclear power plant, which is just about 20 miles from East Hampton.”

Christie is involved in numerous charities. This summer, she will be the honorary chair of the Starlight Ball at the Ross School, SoFo Natural History Museum Benefit, as well as the Julie Ratner Event for Ellen’s Run. She will also be honored as Humanitarian of the Year at this year’s Petfest hosted at the Bridgehampton Historical Society Corwith Museum. Her enthusiasm for helping others certainly hasn’t gone unnoticed by the community.

Amazingly, after a 12-hour day of shooting, that same level of enthusiasm and radiant energy is still apparent. While changing in and out of several looks, holding a perfect pose over the hard cement for well over an hour, curving her body expertly in seven-inch heels as everyone around her shivers, she maintains her enthusiasm. And when everyone is ready to call it quits, Christie is willing to go the extra mile on a frigid day at the beach. Watching Christie Brinkley run down a freezing beach, while twelve people in layered sweaters and down parkas shiver, is truly a sight. She frolics in the sand as if it were mid-June, momentarily making me forget how cold it really is, until my knocking knees and shivering lips remind me. To say that Christie is the ultimate professional would be an understatement. To know her is to witness magic. And then I realize what her secret is. It was there from the moment I first saw her years earlier and it has remained throughout — it’s a force unlike any other. Christie Brinkley has a centered and ever-present sense of bliss. It’s the kind of bliss that comes from knowing yourself and your abilities, and using those abilities to make the world a better place. It’s a beautiful energy that powers Christie and envelops everyone around her. So it seems that Christie Brinkley has discovered the fountain of youth, but it’s not a potion or a pill — it’s an open and enthusiastic mindset, true goodness of heart, and dedication to the world around her.