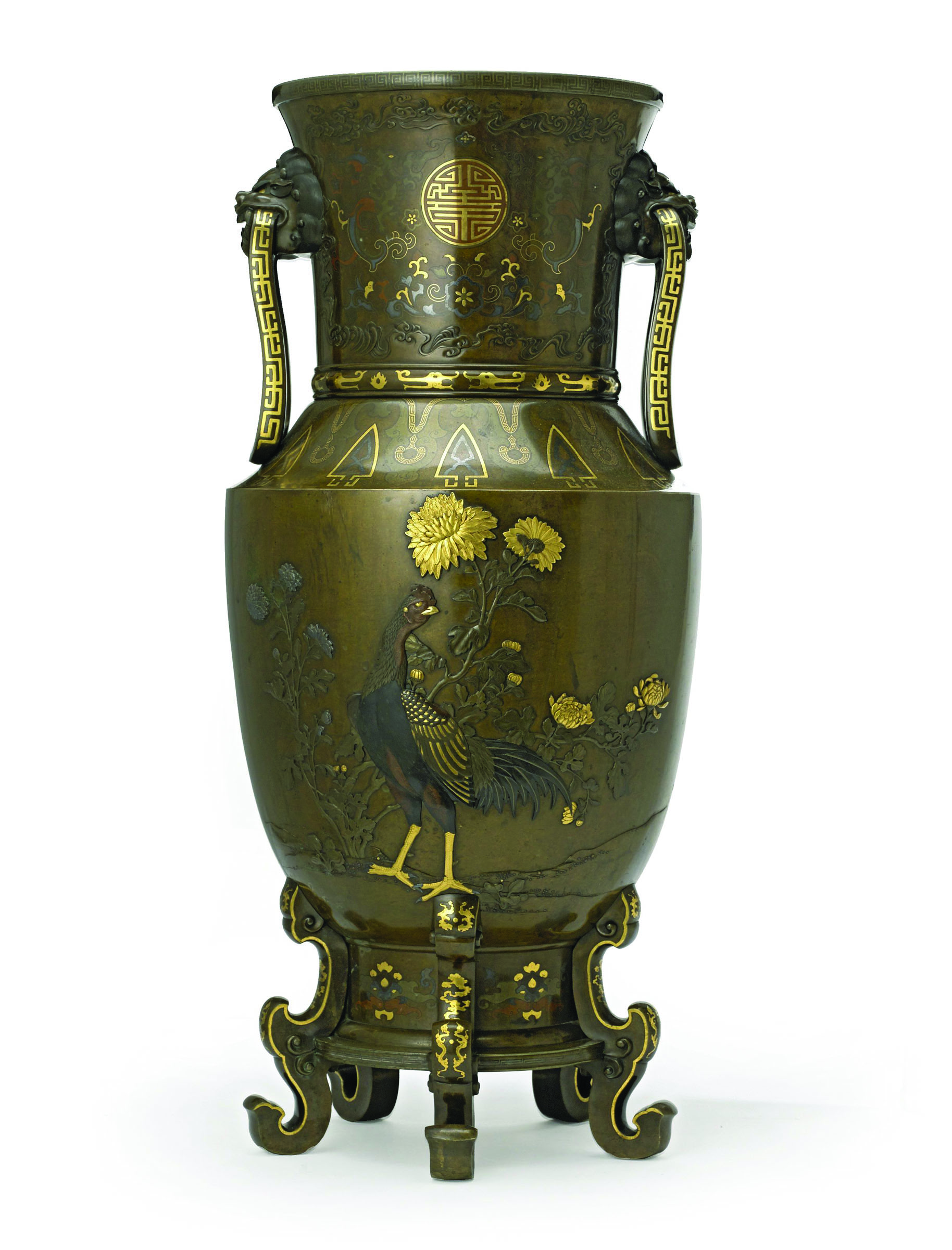 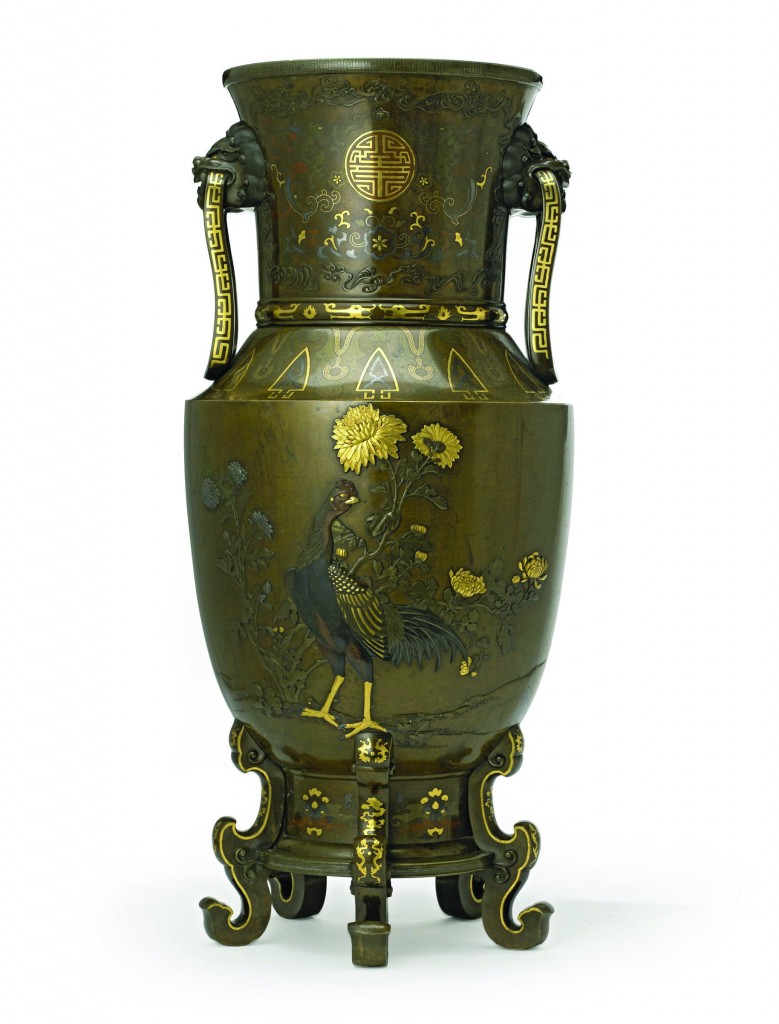 Behind the elegant glass façade at 580 Madison Avenue is Bonhams’ New York salesroom. In this expansive, well-lit space, multi-million-dollar auctions are all part of a day’s work. Founded in 1793, Bonhams is one of the world’s largest auctioneers of fine art and antiques, with a global network of consultants and representatives offering valuation services and advice in 60 specialist areas. In addition to its two major salesrooms in London, Bonhams holds principal sales in Paris, Sydney, Hong Kong, Los Angeles, San Francisco, and New York. Bonhams achieves more sales per year than any of its competitors, with transactions ranging from several thousand dollars per lot to several million. One recent auction, featuring the private fine jewelry collection of a well-known and very well-dressed socialite, achieved a total of $2.5 million. The highlight was a spectacular Bulgari ring that went for $590,500. During Bonhams’ Asia week in March, sales were swift and robust, and many lots far exceeded estimates. One exquisite Satsuma vase, from the Meiji period, multiplied its estimated value of $4,500 many times over to sell for a staggering $88,000.

Such strong performance year after year can be attributed to Bonhams’ approachability and outstanding client care and to its level of specialization. It is clear, even from a brief review of its myriad departments, that no auction house specializes quite like Bonhams. Dedicated specialists in antiques, Asian art, clocks and watches, decorative art, furniture, fine jewelry, motoring, and wine and whisky are available for consultation and appraisal, ready to advise both seasoned collectors, and first-time buyers and sellers.

Two specialists from Bonhams New York talked about the most highly anticipated fall auctions in their respective departments. Jeff Olson, director of the Japanese department, spoke to us about the upcoming auction of fine Japanese works of art, slated to take place Sept. 17. Among the many Eastern treasures, a complete single-owner netsuke collection stands out. These finely crafted miniature sculptures, developed in the seventeenth-century, once served a utilitarian purpose: as toggles to hold in place the cords that attached hanging accessories to the sashes of traditional Japanese robes. Netsuke evolved during the course of the 19th-century into fashion accessories. Olson described this as a natural progression from the practical to the aesthetic. After all, Japanese artisans are famed for their unrivalled craftsmanship, for “making objects that were functional, beautiful,” explains Jeff.

The delicate figurines in the collection up for auction include an exquisite netsuke of a recumbent kirin, a mythic creature believed in many East Asian cultures to be an omen of good luck. Other notable figurines in the collection are a wood netsuke of a standing horse, and an ivory netsuke depicting a dragon. The Japanese auction will feature many other lots certain to excite and tantalize, including several prints, a finely wrought bronze vase with gold detail, and a lacquered box with an intricate leaf design.

We spoke also to Joseph Hyman, Bonhams’ whisky specialist, about the upcoming whisky, cognac, and rare spirits auction. On Oct. 13, capacity crowds are expected in Bonhams’ Madison Avenue salesroom. Fine spirits auctions are always lively and popular events, and with high reserve prices on the bottles, most lots realize at or above estimates. At the whisky sale in April, one bottle of 50-year old Macallan anniversary single-malt scotch went for an impressive $40,000. Also notable was a 25-year-old 1890 W.L. Weller bourbon that sold for $1,785, which, with its unique presentation inside a wicker basket, had the look of a true collector’s piece. The spring auction sold over 91 percent by lot and 97 percent by value, and the upcoming sale can be expected to do the same. Details of the fall auction are not final, but Hyman did reveal that the lots would include a spectacular Erté Courvoisier collection: eight bottles of fine cognac in collectible bottles designed by the famed Art Deco illustrator, estimated to sell for between $7,000 and 10,000.

Bonhams makes both the registration and the bidding process simple and efficient. Registration can be done online, by telephone, or in person. Bonhams generally opens each auction for preview the Saturday before the sale. Previews allow serious collectors and potential buyers to examine the lots more closely in a relaxed setting, and to handle the objects they have seen featured in the luxury auction catalogue, which Bonhams sends out a month in advance of each sale and posts on its website. On the day of the auction, buyers can participate in person, by telephone, or online. While telephone bidding remains favored by many collectors for its practicality and guaranteed anonymity, online bidding is a rapidly growing market. Many first-time buyers prefer to let Bonhams conduct the bidding on their behalf, and choose to bid by absentee bid. This is the easiest and most secure option, and ensures that the buyer’s upper limit is not exceeded in a moment of overzealous paddle-waving.

Bonhams is frequented by the most discerning collectors: individuals looking to invest in the rare and the beautiful, the quirky and the coveted. Robb Report recently named Bonhams the “Best of the Best for Collectibles for 2013” in recognition of the auctioneer’s international excellence and for the unique blend of approachability, variety, and specialization that defines the Bonhams’ ethos.

So paddles at the ready, allons-y. What will you bid?