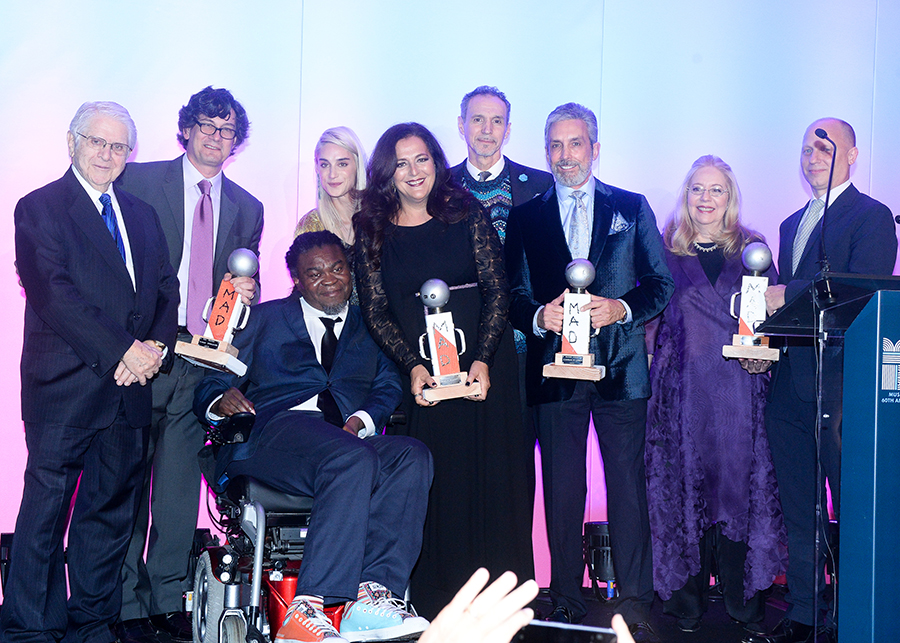 The Museum of Arts and Design (MAD) champions contemporary makers across creative fields and presents the work of artists, designers, and artisans who apply the highest level of ingenuity and skill. Since the Museum’s founding in 1956 by philanthropist and visionary Aileen Osborn Webb, MAD has celebrated all facets of making and the creative processes by which materials are transformed, from traditional techniques to cutting-edge technologies. Today, the Museum’s curatorial program builds upon a rich history of exhibitions that emphasize a cross-disciplinary approach to art and design, and reveals the workmanship behind the objects and environments that shape our everyday lives. MAD provides an international platform for practitioners who are influencing the direction of cultural production and driving twenty-first-century innovation, and fosters a participatory setting for visitors to have direct encounters with skilled making and compelling works of art and design. The Museum will be celebrating its Diamond Jubilee 60th Anniversary this year.

As owner, President, and CEO of Cohen Brothers Realty Corporation, Charles S. Cohen has achieved a national reputation for exceptional business acumen, innovation, and creativity. His real estate portfolio includes over 12 million square feet of prime commercial properties in New York, Texas, Southeast Florida, and Southern California. He redeveloped Manhattan’s D&D Building, Los Angeles’ Pacific Design Center, Design Center of the Americas, and Decorative Center Houston, all of which serve thousands of design professionals and design aficionados. A lifelong film enthusiast, Cohen has produced Academy Award nominated films; his Cohen Media Group produces and distributes renowned independent and foreign films throughout the world, while the Cohen Film Collection is comprised of over 800 landmark films. The Republic of France named him a Chevalier de l’Ordre National du Mérite in 2014 and a Chevalier des Arts et des Lettres in 2015 for his significant contributions promoting French cinema and art in the U.S. Cohen serves on the boards of trustees for the Museum of Arts and Design, the French Institute Alliance Française, Lighthouse Guild, and the Real Estate Board of New York.

Born in Baghdad, Dame Zaha Mohammad Hadid (1950-2016), DBE, founder and late partner of Zaha Hadid Architects, stands as possibly the most decorated and illustrious female architect of all time. Breaking barriers for women architects the world over, Dame Hadid was educated in mathematics at the American University of Beirut and pursued her degree in Architecture at the Architectural Association School of Architecture, London, under Rem Koolhaas and Elia Zenghelis. She was the recipient of the Pritzker Architecture Prize in 2004 and the Stirling Prize in 2010 and 2011, and in 2015 she became the only woman to have received the RIBA Gold Medal in her own right. In addition, she received honorary titles from both the French and British governments. Moving from conceptual architecture in the late 1970s and early 1980s, Dame Hadid was heavily influenced by constructivism in her early career, before evolving into her later fluid, multi-perspectival style made possible by technological advances in parametric architecture. She completed countless prestigious commissions that became instant neo-futurist icons, including Guangzhou Opera House, the London Olympic Aquatics Centre, and the Eli and Edythe Broad Museum at Michigan State University.

The family-run fashion house Missoni has been at the forefront of Italian fashion since husband and wife Ottavio and Rosita Missoni started designing their unconventional patterned knits in the neighborhood of Varese in 1953. Tied to the aesthetic innovation and technical invention that have continuously changed the identity of knitwear, Missoni is one of the best-known, loved, and recognized fashion and design brands in the world. Missoni style is the result of a partnership between two people. Ottavio and Rosita set up a knitwear business in the 1960s, and were soon at the cutting edge of Italian fashion. Missoni inaugurated and affirmed an unmistakable way of dressing and living: with a colorful “put-together” of zigzag motifs, stripes, waves, and slub yarns in a patchwork of geometric and floral jacquard. The couple started a family, and their children Vittorio, Luca, and Angela, the brand’s Creative Director since 1996, grew up in direct contact with their parents’ work. Closely involved with the business, they took on increasingly responsible roles, becoming co-creators in a project that continues to seduce and excite today. Missoni is now one of the best representatives of Italian fashion and design excellence around the world. With its pioneering multicolored aesthetic vision, it continues to influence the contemporary lifestyle, thanks also to the success of the Missoni Home line.

Yinka Shonibare, MBE, was born in 1962 in London and moved to Lagos, Nigeria, at the age of three. He received an MFA at Goldsmiths College. Shonibare’s work explores race and class through the media of painting, sculpture, photography, and film, and questions the meaning of cultural and national definitions. His trademark material is the brightly colored “African” batik fabric, inspired by Indonesian design, mass-produced by the Dutch, and eventually sold to the colonies in West Africa. In the 1960s, this material became a new sign of African identity and independence. In 2002, Shonibare was commissioned by Okwui Enwezor at Documenta 11, Kassel, Germany, to create his most recognized work, Gallantry and Criminal Conversation, which launched him on to an international stage. A 2004 Turner Prize nominee and a member of the Most Excellent Order of the British Empire, or MBE, he has exhibited at the Venice Biennale and internationally at leading museums; in 2008, a major mid-career survey commenced at the Museum of Contemporary Art Australia and toured to the Brooklyn Museum and the Smithsonian Institution National Museum of African Art. His work Nelson’s Ship in a Bottle was the 2010 Fourth Plinth Commission and was displayed in Trafalgar Square, London—the first commission by a black British artist. He was elected a Royal Academician by the Royal Academy, London, in 2013. Shonibare’s works are included in prominent collections of international museums, including the Tate and the Victoria and Albert Museum, London; Smithsonian Institution National Museum of African Art, Washington, DC; Museum of Modern Art, New York; and Moderna Museet, Stockholm.