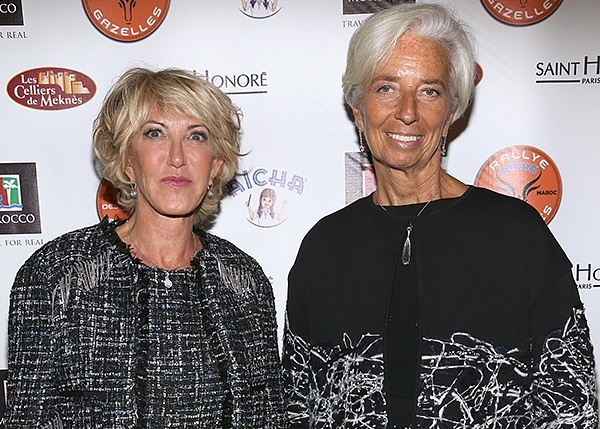 Pioneering all-women rallye Rallye Aïcha des Gazelles du Maroc – faithful to its founding values: courage, the desire to push one’s limits, loyalty, solidarity and social commitment – hosted a kickoff party at Rotisserie Georgette in New York City on November 3, 2016 to celebrate the 27th annual event, which takes place between March 17 and April 1, 2017 in the unspoiled beauty of the Moroccan desert.

Attendees enjoyed Cocktails & Hors D’oeuvres while learning more about the world’s first all-women off-road rallye. An hour and a half into the event, Dominique Serra took to the stage to thank guests for attending the event and for their interest in learning more about the 27th annual rallye. After a short video presentation, she welcomed rallye partners Lisa Bensimon (Conserves de Meknès) and Rita Zniber (Diana Holding foundation) onstage, who spoke about the women “Gazelles” and the challenge yet freedom and commitment it means for the women who enter this once-in-a-lifetime competition. After a second video presentation by Serra, Nezha Larhissi (Minister Office of Hakima ElHaïtéMinister of Environment) noted the importance in the environmental aspect of the rallye and how it puts sustainability at the forefront of its operations, both in terms of the natural environment and in terms of the local population. A third and final video explained the work of the rallye’s charitable organization Cœur de Gazelles, which was followed by a much anticipated speech by the Managing Director of the International Monetary Fund, Christine Lagarde. Lagarde opened by sharing how she saw herself as the godmother of the “Gazelles” and her longstanding involvement with the rallye. She highlighted the rallye’s core value of empowering women and how the rallye stands for respect (for both the environment, the people and the country) as well as generosity (because it gives back more than it receives). Lagarde ended her remarks by noting her deepest admiration of Serra and the efforts she has put in to making the rallye what it is for 27 years, and for being a pioneer who noted as early as 1990 how the central idea of the rallye must be sustainability.

All Rallye participants, known as “Gazelles”, leave this adventure marked forever by the experience: they push their limits, have to face themselves, far from their sometimes difficult daily lives as women; there is also a strong element of sharing and mutual aid with their teammate as well as with the other “Gazelles”.  But while the Rallye Aïcha des Gazelles is a return to the roots of adventure, it is also, with its satellite system for tracking the teams, on the cutting edge of technology when it comes to safety. This duality is the strength of this unusual competition. With its unique concept, the Rallye Aïcha des Gazelles du Maroc is changing the way people view automobile use.

The Rallye Aïcha des Gazelles du Maroc is the only women-only off-road Rallye in the world.  Created in 1990, this unique event brings women between the ages of 18 and 71 from more than 30 different countries together in the Moroccan desert. Since its inception, the Rallye Aïcha des Gazelles has been creating a new vision of automobile competition: no speed and no GPS, just old fashioned navigation, completely off-road: a return to the roots of Adventure. The only requirement is determination. The women who take part in this Rallye—known as Gazelles—are of all ages, social backgrounds, nationalities and levels of off-road experience. Whether in a 4×4, Crossover, Quad, truck or motorbike, they all come to take part in a unique competition: whose competitors share the values of tolerance, solidarity and determination, that respects the host country and its people through the actions of the Rallye’s non-profit, Cœur de Gazelles, and that cares about the environment: the Rallye Aïcha des Gazelles is the only motor Rallye in the world with ISO 14001 certification.

While the Rallye Aïcha des Gazelles marks a return to the roots of adventure, it is also on the cutting edge of technology, with a satellite tracking system for optimal safety. A new vision for the world of motor sports! We have been putting forward a new vision of motor sport for years, with the development of an event where the pleasure lies in driving without excessive speed, and where the goal of driving the shortest possible distance is in line with our environmental commitment.

Coeur de Gazelles is a group of highly motivated volunteers working daily to provide people with the help they need. A registered non-profit organization since 2001, Coeur de Gazelles is committed to providing sustainable aid through concrete actions. Our cross-border efforts must remain strong to allow us to uphold our values and continue to help those who are the most in need.

Coeur de Gazelles works on projects that meet the needs of Morocco’s remote populations: medical care, education, the environment and sustainable development, job training for women, improving living conditions and a desire to spread joy by distributing donations. Our actions are established on a “human scale”: we work with the local population to address the source of the problem. We work with and for the most disadvantaged: our actions enable people to become agents of their own development. We work in a spirit of partnership: we do not create alternative structures; we strengthen and develop existing local ones. We work with low operating costs: all donations are used for the direct benefit of the population. Our actions are recognized by the Moroccan government: we work on legitimate projects in collaboration with local authorities.