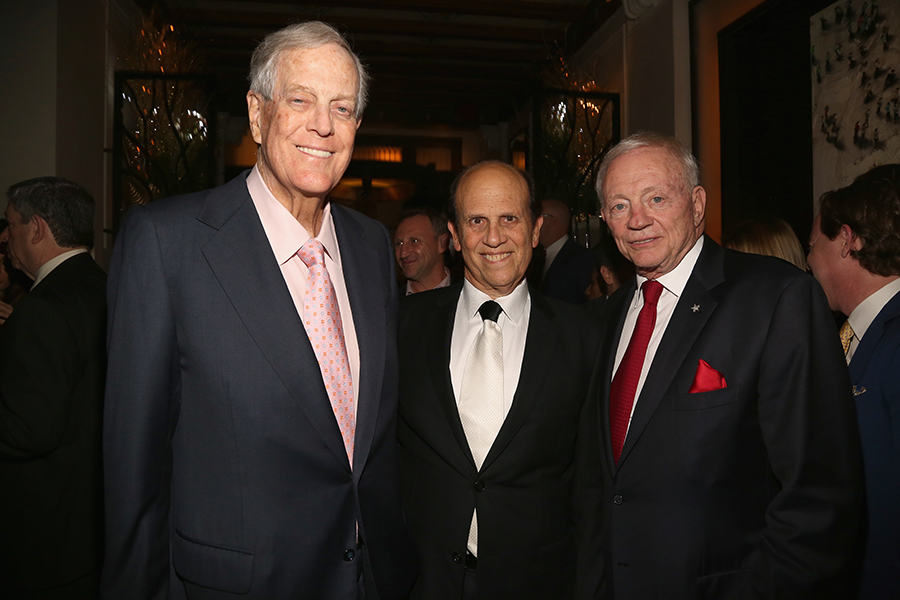 with special musical performances by Bernadette Peters and Matthew Morrison

Prostate Cancer Foundation (PCF), a nonprofit organization which remains steadfast in its commitment to identify and fund groundbreaking cancer research programs to save the lives of millions, hosted an Intimate Dinner at DANIEL on New York’s Upper East Side on Wednesday, December 7, 2016. The memorable event featured special guests, performers and other surprises. A highlight of the evening was special musical performances by actress, singer and author Bernadette Peters and Matthew Morrison, formerly of Glee and several on and off-Broadway shows.

The event, which directly benefitted PCF and its work, offered tables at $100,000. Live auctions raised more than $5M to fund 4 Challenge Awards – ground breaking research projects that will improve and provide better treatments for cancer patients. During the evening, Mike Milken took to the stage to highlight some of the research initiatives PCF is currently funding. He also presented Marie Bernstein and Larry Leeds with trophies as the 2016 winners of the Charles Evans PCF Pro-Am Tennis Tour. A trivia quiz was held over the course of the evening, which attendees could partake in while enjoying the delectable dishes prepared by Daniel’s Chef Daniel Boulud.

About the Prostate Cancer Foundation (PCF):

The Prostate Cancer Foundation (PCF) is the world’s leading philanthropic organization funding and accelerating prostate cancer research. Founded in 1993, PCF has raised more than $660 million and provided funding to more than 2,000 research programs at more than 200 cancer centers and universities. The PCF global research enterprise now extends to 19 countries. PCF advocates for greater awareness of prostate cancer and more efficient investment of governmental research funds for transformational cancer research. Its efforts has helped produce a 20-fold increase in government funding for prostate cancer.

For further information on the PCF, please visit http://www.pcf.org/

Peters is an American actress, singer and children’s book author. Over the course of a career that has spanned five decades, she has starred in musical theatre, films and television, as well as performing in solo concerts and recordings. She is one of the most critically acclaimed Broadway performers, having received nominations for seven Tony Awards, winning two (plus an honorary award), and nine Drama Desk Awards, winning three. Four of the Broadway cast albums on which she has starred have won Grammy Awards.

Matthew James “Matt” Morrison (born October 30, 1978) is an American actor, dancer, and singer-songwriter. Morrison is known for starring in multiple Broadway and Off-Broadway productions, including his portrayal of Link Larkin in Hairspray on Broadway, and for his role as Will Schuester on the Fox television show Glee (2009–2015). Morrison is signed with Adam Levine’s 222 Records. Morrison received a Tony Award nomination for his featured role as Fabrizio Nacarelli in the musical The Light in the Piazza. From March 2015 to January 2016, Morrison starred in the lead role of J.M. Barrie in the Broadway production of Finding Neverland