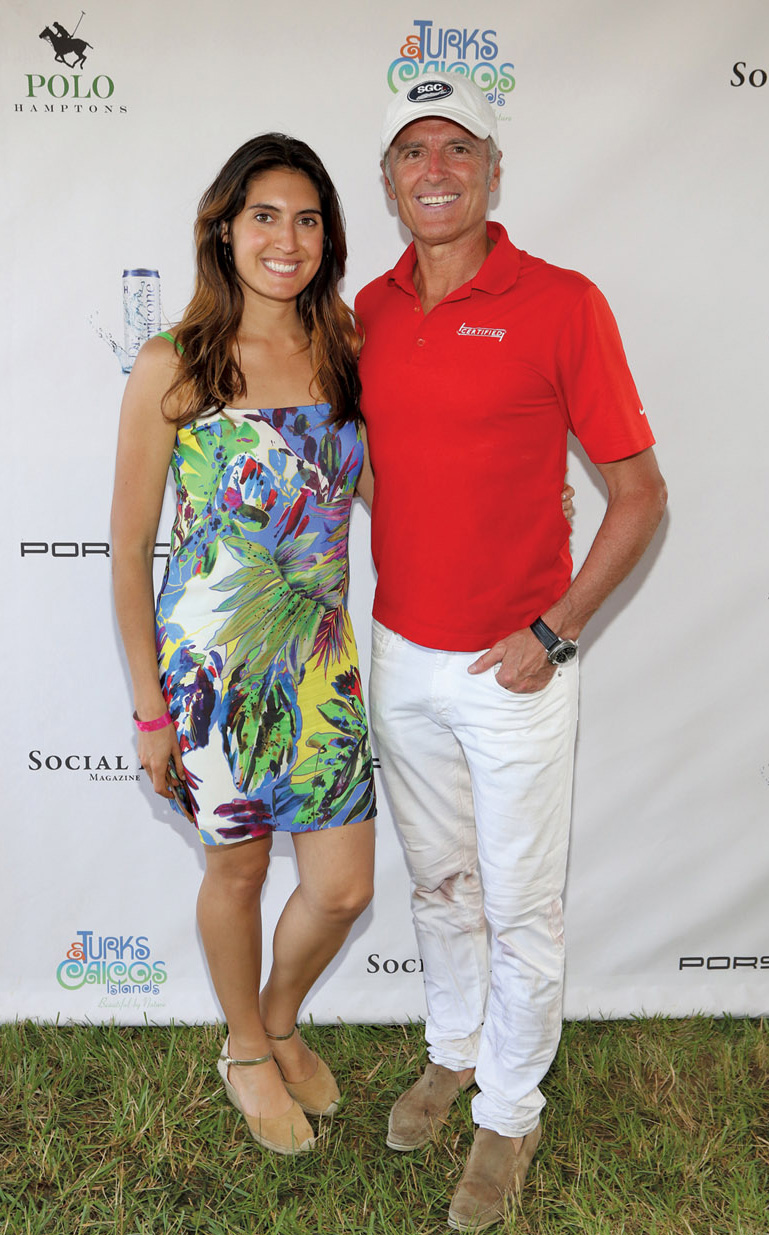 If you long for the days when polo was king in Bridgehampton, you’re not alone. Not only did the uber-exclusive activity attract the likes of European royalty, Hollywood superstars, and the fabulously wealthy, it was the touchstone for an entire culture: yes, there was a time when Polo Ralph Lauren and Beverly Hills Polo Club were a thing. Many of us still wax nostalgic when we see that little embroidered emblem on our shirts.

And then there’s sexy, and one name immediately comes to mind: Nacho Figueros.

Famed polo enthusiast and player Michael Borrico is among those who fondly remember the old days, and his enduring cachet is in the prominent role he played in bringing polo to prominence in the Hamptons in the early days.

While today he is mostly an enthusiast, and spends a good deal of time happily in love with his beautiful girlfriend, the floral designer Elisabeth Santana, Borrico is well known among the polo elite as a player, an organizer, and an ambassador of the all-important Hamptons polo culture.

“For me it’s both nostalgic and true passion. I discovered polo in Argentina in the 1990s, and quickly fell in love with everything the sport has to offer, from the excitement of watching the game to honing my skills as a player,” says Borrico. “Eventually my love of the sport grew into the real thrill of meeting and playing on the same field with the world’s top professionals.”

It’s safe to say that Borrico was among the pantheon of superstars who quickly helped make the Hamptons the destination for polo in the United States. After all, he was coached by the likes of professionals such as Figueras, Mariano Aguerre, Nic Roldan, Nick Manifold, and Martin Pepa.

“For me, it eventually morphed from a sport into a lifestyle,” says Borrico, who credits Pepa as a true mentor. “And, I wasn’t alone. Polo came to define the Hamptons.”

Sadly, the polo scene has gone quiet in recent years due to a number of pressures. But Borrico says that the Hamptons will have a welcome taste of the old days when Social Life Magazine, in collaboration with other major sponsors, hosts Polo Hamptons on July 24 from 4 pm to 7 pm at the Southampton Polo Club.

According to Borrico, this will be the type of upscale, luxury event that the East End has been yearning for. “It was an honor to be contacted by Social Life publisher Justin Mitchell to get my thoughts on what this event should look like, so I have been thrilled to lend my support wherever possible,” he says.

Namely, Borrico has taken on the task of putting together the team for the event. While he hints that there will likely be some big names on board (he’s in the process of making some calls, and Nacho just might be on his list), what he will reveal is that the event will feature a robust combination of well-known seasoned players as well as some rising-star amateurs. Teams will be determined a couple of weeks in advance: Social Life Magazine will naturally be prominently displayed on one of the team’s shirts, he says.

Obviously busy with lending his hand to planning the event of the season, Borrico took a breather for a recent conversation about the old days and how polo will be reborn for one important day.

It’s no longer a rumor that polo will have a brief but impactful resurgence at what promises to be an important social event this summer.

It’s definitely not a rumor and, in fact, thanks to Justin Mitchell, we are bringing it back in a big way on July 24. With new sponsorships, a great party, and some of the glitz and glamour that we’ve missed the past few years. It’s very exciting, and a lot of people will enjoy it. I anticipate that it will get a lot of attention!

What is it about polo that was and continues to be romanticized and important to the Hamptons?

I think everyone has a natural attraction to the horses and the players. It really has a great sexiness to it, just like the Hamptons itself. I mean, many of the players are South American, so they are all handsome and fit . . .  in that way, it’s also very masculine! It’s also exclusive, and people here love that, too. Bundling that all together makes it alluring. I mean, fashion designers have used polo to launch entire brands! When you throw in the fashion, the parties, and everything else, it’s just a phenomenon that can’t be equaled.

So, what happened? Where did it go?

Probably about five years ago, many of the polo fields lost their leases and a number of the major players retired.

Are people yearning for it to come back?

Absolutely. From mid-July to Labor Day weekend, the crowds would be in the thousands, and the lists were pretty tight. It was an A-list group for sure. Getting into the tent was a thing every Saturday and Sunday.

You knew it was a big deal from some of the sponsors, too.

Definitely. People would plan weeks in advance to attend! Celebrities were all over the place, and people would use their influence to get on the list. It was a big part of the Hamptons. To be fair, it hasn’t really gone away; we’ve just been playing without a high goal Saturday polo event and the social scene it would attract. Polo has sort of fallen off without it to look forward to every week. What we have now isn’t as fast, but still quite competitive. Everyone who has been involved in the sport wants to bring back the high goal and wants the opportunity to experience it the way it once was.  Polo Hamptons, and the event on July 24 will recreate those glory days by injecting some much needed luxury, sensation, and buzz around the sport. It’s very exciting. A lot of people will truly enjoy this.

So, you still play?

Of course, and I still enjoy it.

What’s your favorite memory of the old days?

Oh man! The parties afterwards were always a blast! Seriously though, the build-up to a special game day and being able to play at the field in Bridgehampton, and looking back at a tent with thousands in attendance, and hundreds more lined up trying to get in. That was just exciting as hell!

So it sounds like you’re really looking forward to this summer.

I’m already having those game day memories, and I can’t wait to experience some of that again.