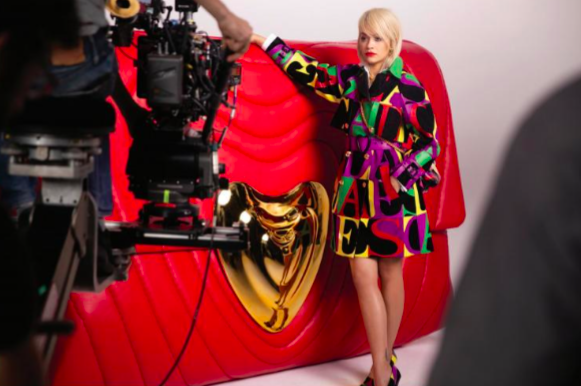 There are few brands as iconic as ESCADA. Founded more than 40 years ago by Margaretha and Wolfgang Ley, the brand is rooted in a confident and elegant vision of femininity, underscored by refined quality and workmanship, and renowned for its exuberant love of bold color, print and detail.

And, while the past four decades have seen the coming and going of dozens – if not hundreds – of brands, ESCADA has endured by attracting a devoted global following … and continuing to innovate with bold femininity at the core of its DNA.

Among the attributes that support the endurance of ESCADA is the brand’s special knack for tapping exceptional ambassadors.

Enter Rita Ora who was bestowed with the ambassador mantle in conjunction with the launch of the brand’s Spring/Summer 2019 campaign this past winter.

“I remember the (ESCADA) perfumes when I was really young – the iconic bottles always stood out on my dressing table because of the bright colors,” says Ora, an English singer, songwriter and actress who rose to prominence in 2012 when she was featured on DJ Fresh’s single “Hot Right Now.”

“For me, ESCADA is a celebration of women, the WOMAN. And I think it’s really important to define that as a working woman, a glamorous, confident, independent woman and a woman on a mission. Being an independent woman means not being afraid to be who you are and stand up for what you truly believe in.” 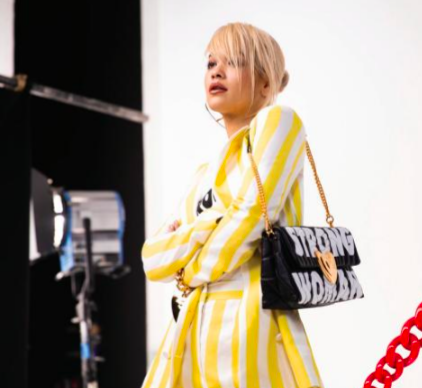 Definitely a woman on a mission, Ora and her star continued to intensify after her first foray into music. The past year and a half have been particularly momentous. Following a sold-out European tour in 2018 and an incredible summer playing to millions of fans with over 33 live dates, her latest five hit singles have amassed over 1.3 billion Spotify streams worldwide. The global hit, “Your Song”, written by Ed Sheeran and Steve Mac has reached more than 352 million streams alone.

Ora went on to release a global Top 10 hit last August, “Lonely Together ”, a collaboration with Avicii. Her follow-up single “Anywhere” earned a number two spot in the UK. Collaborations with Liam Payne include “For You” and her girl-power anthem “Girls,” for which Ora teamed up with Cardi B, Bebe Rexha AND Charli XCX . It was, of course, another global success.

All these hit songs are featured on her album “Phoenix” which launched late last year.

In addition to her music, Rita has become an international prime-time star onscreen, as the host of MTV’s EMAS in 2017, as a coach on BBC’s The Voice, a judge on The X Factor UK, and the host of VH1’s America’s Next Top Model.

Throughout it all, Ora has been an inspiration to women.

“What advice would I give young women today? I would say to pursue what you love to do and don’t be afraid to step away from the norm and take a chance – there are no barriers on what you choose to do with your life and you can be successful in,” says Ora. “The sky is the limit, trust yourself and go for it!”

That tenacity is what has led to Ora’s involvement with ESCADA.

“I am so excited to have shot the Spring/Summer 2019 campaign,” says Ora. “The brand has such bold beginnings, and I love that their DNA centers around bright colors, powerful prints and strong women!”

Most recently, Ora Drew the attention of trend-setters globally with the launch of the ESCADA “Heart Bag by Rita Ora.”

“The Heart Bag is what I think about when I think of ESCADA. I absolutely love the bright colors and bold shapes of ESCADA and so the heart bag is definitely a signature piece,” she says. “The best thing about the heart bags and the reason they are so synonymous is because of the message behind them – that you can be who you want to be, challenge the rules and feel strong and confident.”

In harmony with ESCADA’s bold palette, Ora’s love for the color red, signifying strength and passion, appears everywhere from the bag’s soft calfskin leather to its hardware. Its concentric heart pays tribute both to ESCADA’s proud femininity and Rita’s celebration of female independence.

Extending this passion into tangible change, ESCADA and Ora are donating a portion of proceeds from the sale of each bag to Women for Women International – a charity whose mission is to help female survivors of war rebuild their lives.

According to Ora, the collaboration with ESCADA, which is the talk of the industry, is inspired. That said, there is much that inspires Ora.

“In general, there isn’t just one thing that inspires me – it really is something different every day. It may be a conversation with a friend or stranger or an experience that may motivate me to write lyrics in the studio,” says Ora.

“What inspired me when designing this collaboration with ESCADA was this liberating sense of female independence and how beautiful it is to be a woman nowadays. I enjoyed modernizing what ESCADA has really always represented which is just this incredible passion for dressing women in a chic, sensual, but always empowered way.”

The “Heart Bag by Rita Ora” is available worldwide in stores and online.