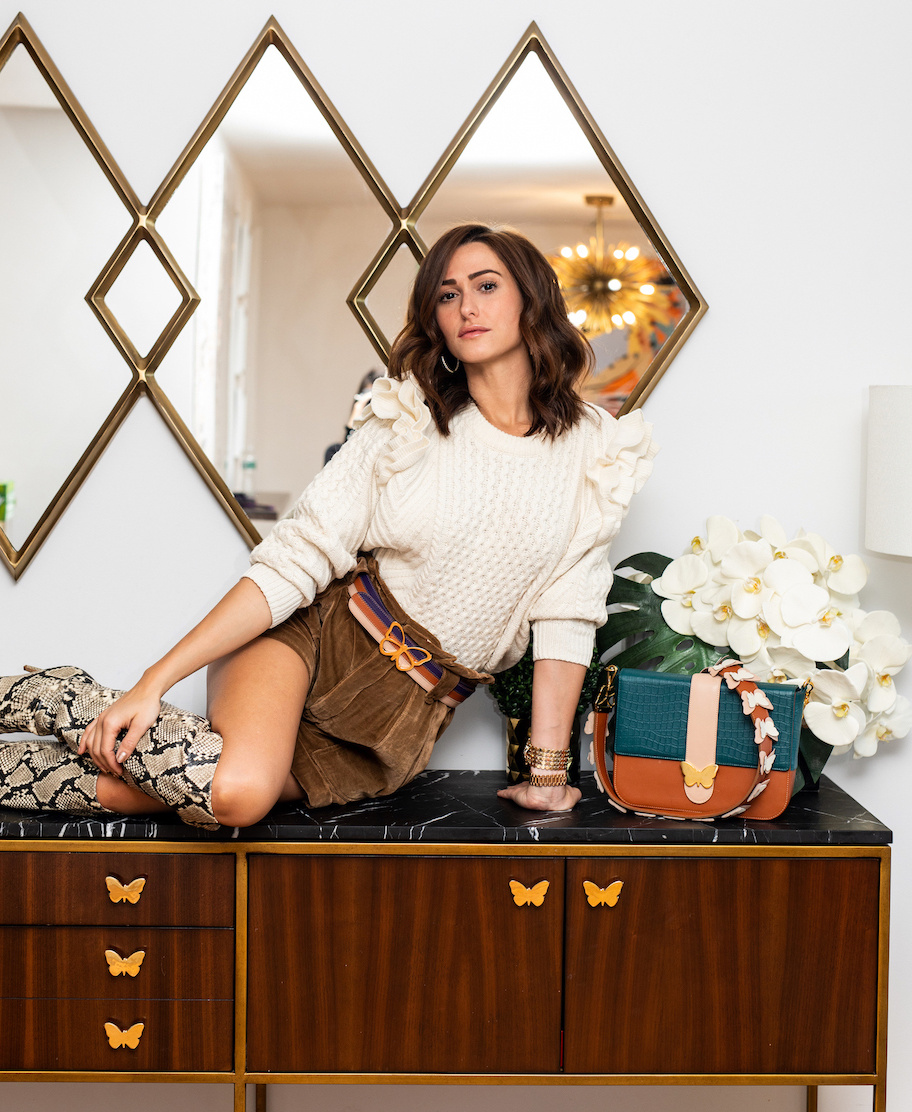 Artist, designer, entrepreneur, and single mother of two, Elizabeth Sutton was born and raised in NYC. In less than four years, she has created a burgeoning art career through her Instagram account, with international collectors stemming from all over the world. In addition to her original paintings, Sutton translates her artworks onto an array of products, including tile, placemats, clutches, leather accessories and belts, home decor, and wallpaper. Her designs have received prestigious awards, and her bags have been featured in the New York Times Sunday Styles section, in Bergdorf Goodman advertisements, as well as her artwork featured in Architectural Digest; all at the tender age of 29.

In addition to her two-time award-winning marble tile collections for Tilebar, and her best-selling designs sold at Bergdorf Goodman, Neiman Marcus, Harrod’s, and Saks, Elizabeth has amassed many celebrity collectors, including Kendall Jenner, Kourtney Kardashian, and Andrea Bocelli. “Creating a bespoke artwork for Mr. Bocelli and seeing the world’s greatest opera singer experience my artwork from a touch and feel perspective was one of the most impactful moments of my career. Not to mention, being invited to his Hollywood Bowl concert as a VIP backstage alongside Emmanuelle Chriqui and Usher was all but a dream. But the cherry on top was when Usher gave me a lift home from the concert. Usher is the first concert I ever went to, so it was all just surreal. But Usher gladly obliged for a selfie, so I know it wasn’t just a dream.”

Life as a Painter 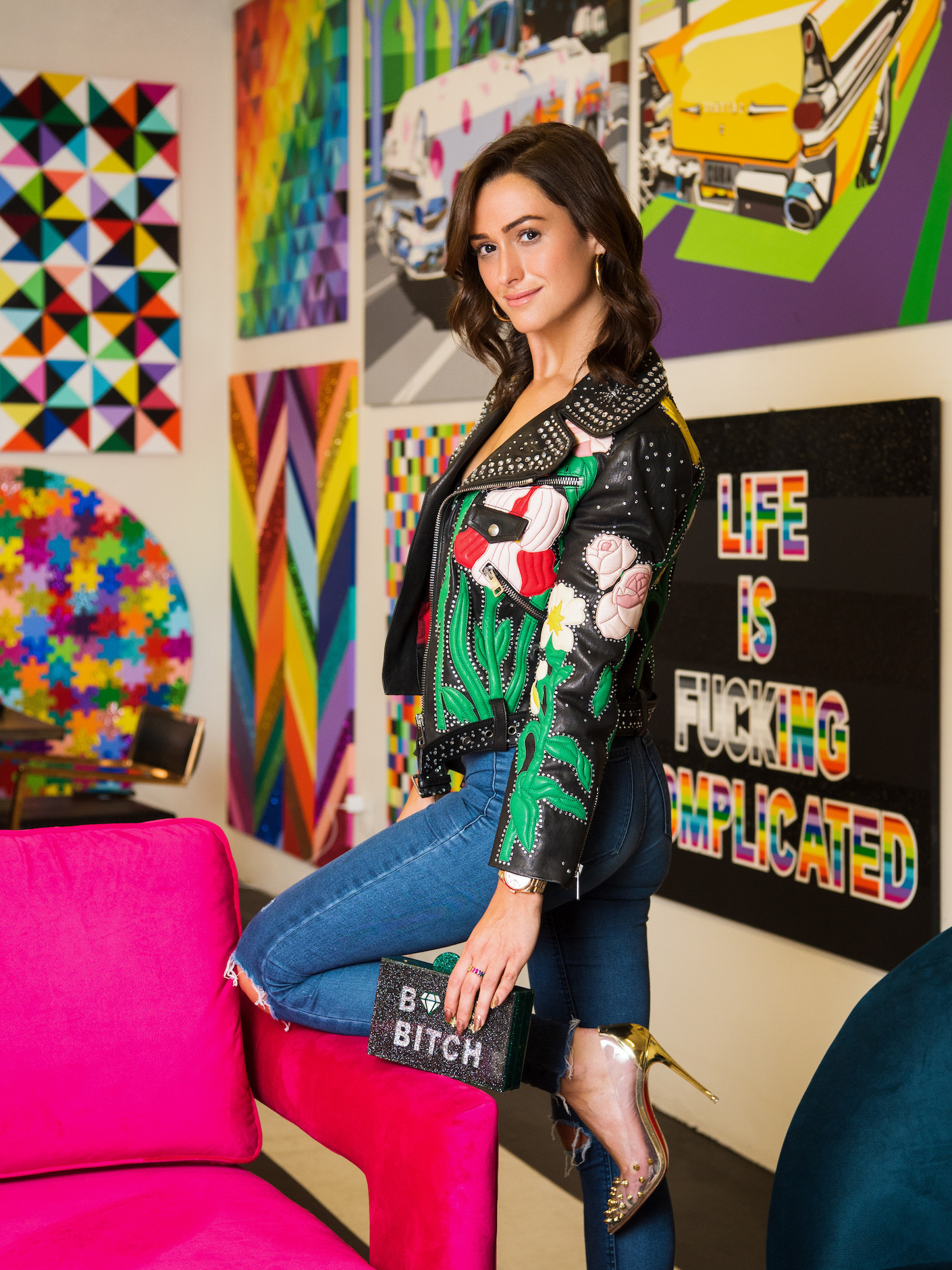 It may be hard to believe, but Elizabeth first picked up a paintbrush in 2015. Before that, she had no art training, little formal business experience, and her entire art career happened as a fluke. Sutton married young, at age 21, and had her first child when she was 25. When her son was first born, Sutton’s life began to slowly turn upside down, when a number of losses in her life hit her by storm. In the span of two years, Sutton experienced severe financial loss, death of an immediate family member, and a miscarriage, forcing her to reflect on her life and realize she was in an unhappy marriage. With a 3-week-old baby at the age of 27, Sutton confronted her two biggest fears – fear of divorce and financial insecurity. And six weeks later, Sutton found herself divorced. 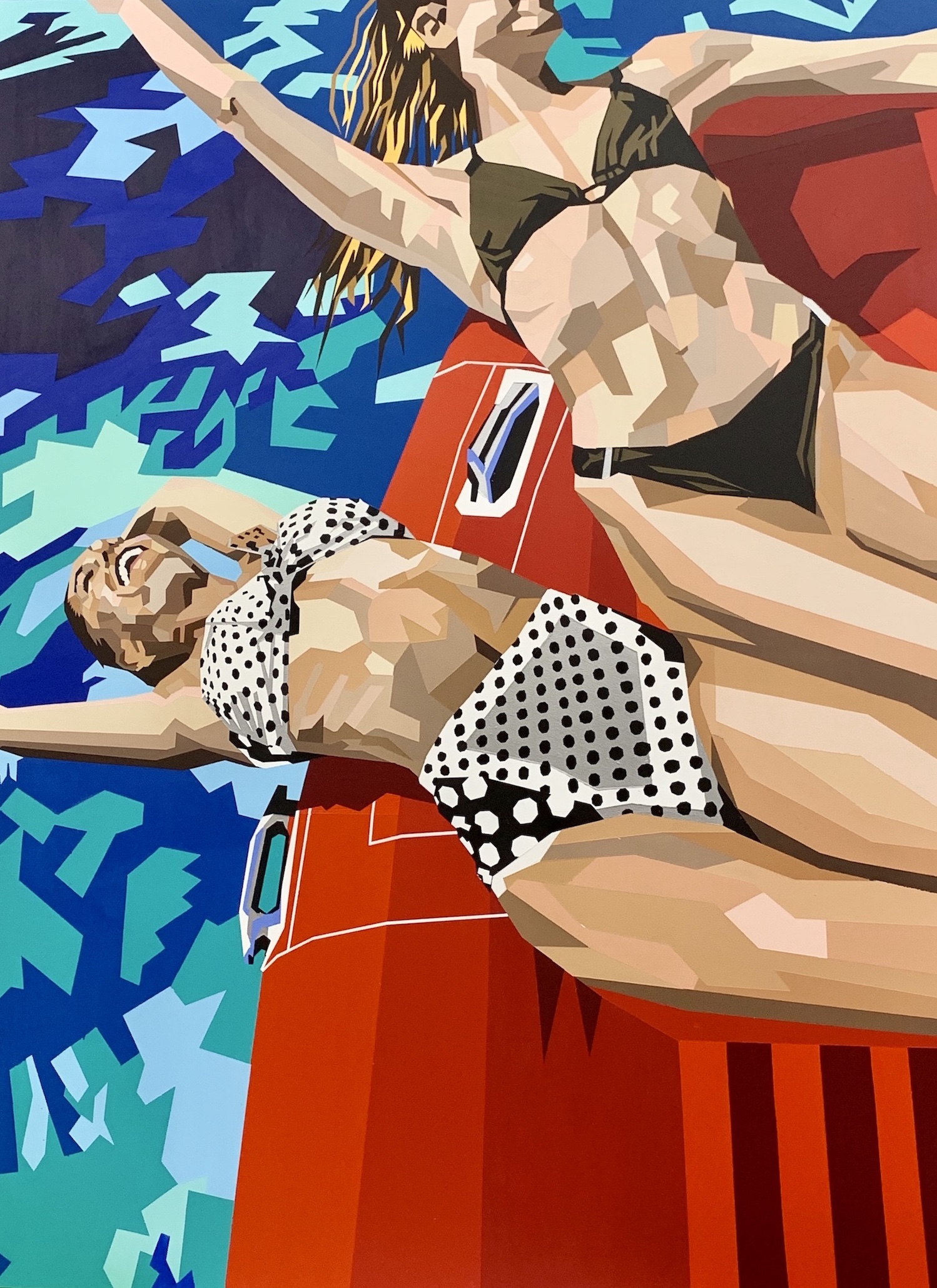 When Sutton left her marriage, she knew she needed to grow her business by delving into product development. Her dream was to create a home décor collection, which she was in the middle of developing when her life, once again, took a devastating turn. On December 10, 2017, her dear friend and art assistant, Juan Salas Salazar, was killed in Elizabeth’s car moments after leaving her birthday party at her pop-up gallery in Wynwood for Miami’s Art Basel week. The tragedy, which also occurred somewhat publicly, left Sutton and many others devastated. But this did not stop her. If anything, the accident taught her that life could be taken in a sheer instant and it fueled her to pursue her dreams with gusto. With the help of her Instagram, she raised $38,000 over a two-week span through her personal account, with proceeds going to Salazar’s 3-year-old daughter, who he left behind.

The accident forced Sutton to temporarily put her home décor plans on hold, and the change of life circumstances led her down a different path. She secured her first major collaborations – one with Bari Lynn Accessories, the world’s largest luxury girls’ accessories line, and one with Joe & The Juice, an international coffee and juice brand, where her cup and shirt designs were featured in all 17 of their NYC locations. After that, it was full steam ahead.

Within one year, the number of accolades and accomplishments Elizabeth achieved were more than some achieve in a lifetime. Elizabeth’s tile for Tilebar won Best in Show at the Architectural Digest Design Show and the HD Expo, the largest hospitality convention in the US. She was named ‘Rising Star’ by POWER Magazine and was honored at The Plaza Hotel where she spoke on a panel alongside actresses Rona Lee Shimon and Margarita Levieva. She spoke as a panelist at the Columbia University-sponsored WIN Summit, amongst the likes of Randi Zuckerberg. She was chosen to paint the esteemed MP Pool party, an 8,500 sq. ft pool deck which was featured in Architectural Digest, Architectural Digest Spain, The New York Post, Curbed, and Time Out New York, and she created bespoke artworks for the upscale steakhouse, Wall Street Grill. She launched a clutch collection, tiles, disposable placemats, leather handbags and belts, and additional home décor items, as well as her blog – all within one calendar year. 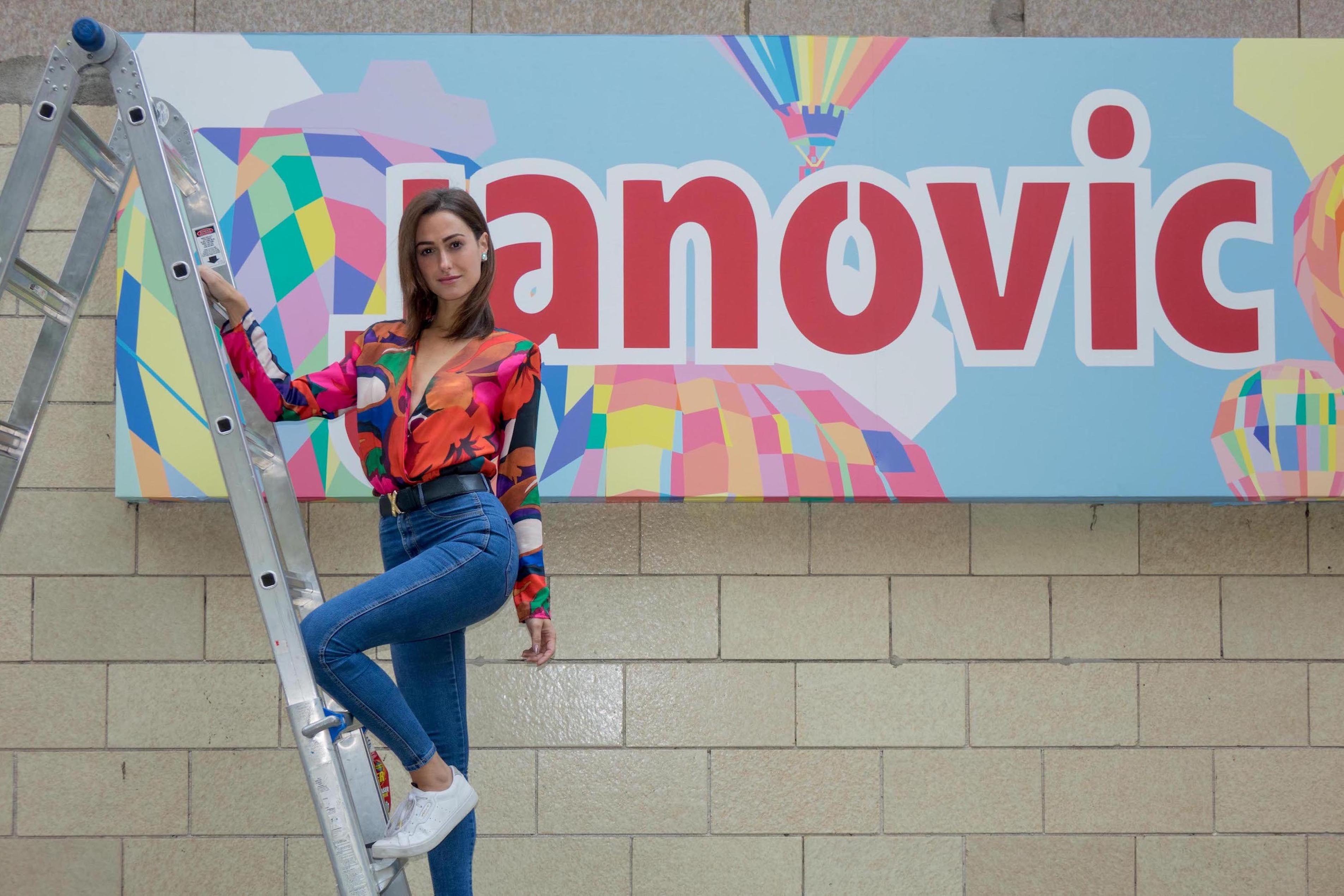 Her biggest ongoing collaborations and projects on the horizon? Her collaboration with Janovic, the largest paint supplier in NYC, launched in September. Sutton was commissioned to create five curated color palettes using 58 shades of Benjamin Moore paints. Her artworks are featured prominently on four NYC buildings, and the collaboration is currently advertised on 18 bus shelters throughout Manhattan. She debuted her first capsule collection of leather handbags and accessories in mid-September comprised of saddlebags and leather straps with an upcoming expansion to the line with leather luggage tags and belts launching this month. Also this month, Sutton will have a major collaboration with one of the world’s most exclusive hotel properties, Eden Rock – St. Barths, for which she created two exclusive, limited edition clutch designs, as well as 16 artworks to be featured in their hotel rooms and a solo art exhibition in March 2020. She is also set to launch a wallpaper collection this winter that is poised to change the game of the interior design world. And last but not least, Sutton is painting what she considers to be her most creative work to date – a pool table in a collaboration with Blatt Billiards. 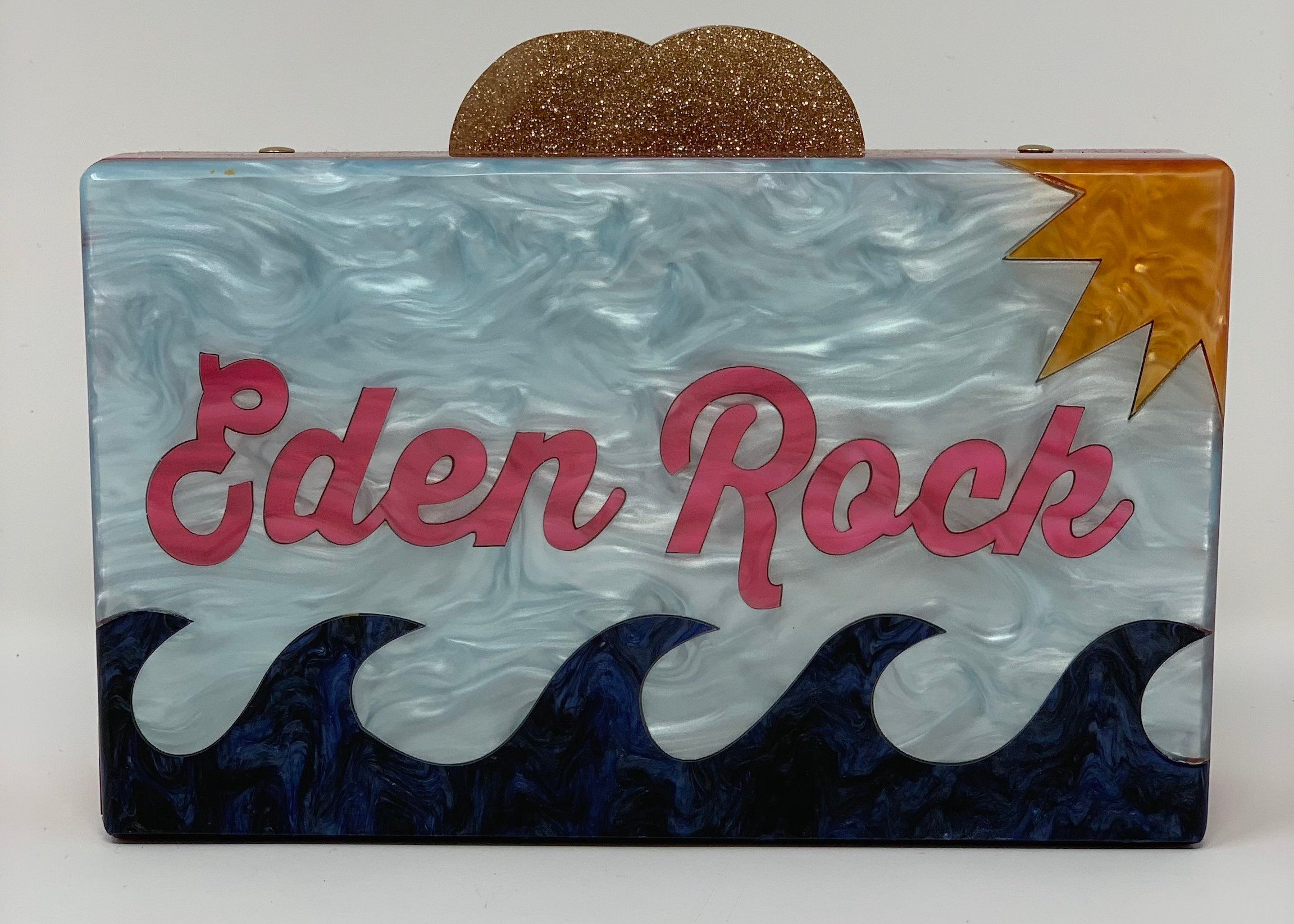 Sutton’s brand is about inspiring others to pursue their dreams. Her goal is to encourage others to be true to who they are, regardless of society’s judgments and opinions. Her dream is to inspire women everywhere to be self-sufficient, financially independent, and confident. In addition to mentoring women, many of whom find themselves stuck like Sutton once was, she is highly involved in philanthropic endeavors. In 2017, she raised $35,000 for ArtStart, an organization that provides music and art therapy for homeless youth in NYC shelters, as well as $12,000 for Art of Elysium in 2018 through her Joe & The Juice collaboration. Her custom painting for United Hatzalah was auctioned at their first annual gala for $36,000, with all proceeds going to the life-saving organization. “I try to build philanthropy into everything that I do. It is very much a part of who I am and it will always be very much apart of the Elizabeth Sutton Collection brand. One day, I hope to start my own charity.” Add it to the long list of things Sutton has on her to-do list. elizabethsuttoncollection.com