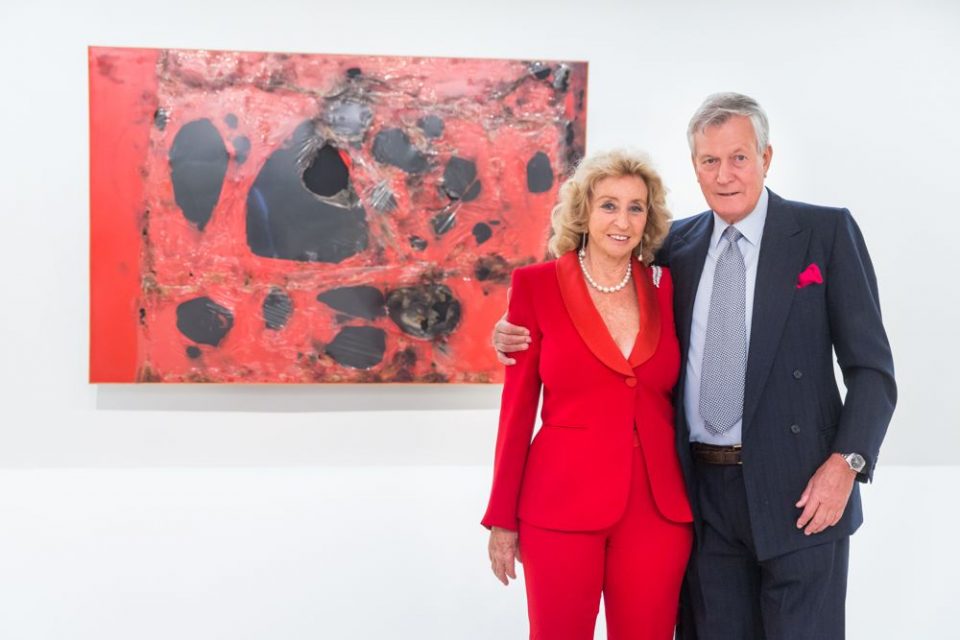 Art consultant and collector Isabella del Frate Rayburn has just published a two-volume book called “Roma — New York” and “Before /Murray and Isabella Rayburn Foundation/ After” both written and edited by Germano Celant, who is the artistic director of the Prada Foundation in Milan.

The book was presented at the National Gallery of Modern Art in Rome this fall. On November 21, the books will be presented at the Casa Italiana Zerilli-Marimo, of NYU, with a panel including Celant, Emily Braun — art historian and curator of the 2015 Burri retrospective, Laura Mattioli of CIMA, and Giorgio Spanu, who recently opened Magazzino Italian Art Foundation, a museum to house his collection of art in Cold Spring, NY.

The first volume was originally published in 1993 to accompany the exhibition “Roma-New York 1948–1964” curated by Celant at the Foundation. This important exhibit explored the relationship between Italian and American art in the 1950s and 60s, when there was a lot of exchange between the two countries. Americans like Rauschenberg, Twombly and Kline were going to Rome at the time, while Italians like Burri, Afro and Scialoja were in New York.

Celant and Rayburn decided to republish the book now because Italian art is again very much in demand in the U.S., and they’d received many requests to reprint it. Celant also suggested writing the story of Isabella’s foundation, her life and collection. This book became volume II. Together, the books provide a comprehensive history of Italian art in the US from 1948–2018. “It’s extremely interesting for anybody who wants to look into what’s been happening this last 50 years regarding Italian art,” said Rayburn.

Rayburn, who has had an extraordinary career in the art world in both New York and in Italy, got her start serendipitously as a young Roman looking for a job. A friend’s husband ran a publishing house specializing in art books and had just opened a gallery. “So, why not? I was young, I was just beginning,” she explained. Working at the gallery, Isabella became friendly with the leading Italian artists of the 1960s and 70s such as Burri, Afro, Paolini, Accardi. “I started to learn and to love art through their eyes,” she says. “Through their eyes and their teaching, they really showed me my way, my career, and it was very exciting.”

After six years in publishing, Isabella went out on her own, starting a small art consultancy in Rome, working with artists and collectors. In the mid 70s, she went to New York, to negotiate an important art deal for the Vatican Museum. After that, she made twice-yearly trips and became more involved in the New York art world befriending dealers: Castelli, Gladstone, Nosei, Sonnabend and Angela Westwater. Eventually she moved to the U.S., and married her late husband, Murray Rayburn, in 1982.

Meanwhile, she’d been building her own collection since the 1970s, and made wise investments early in the careers of renowned artists like Twombly, Warhol, Basquiat, Motherwell and many other blue-chip artists.

Her husband founded The Murray and Isabella Rayburn Foundation, which had originally funded cancer medical research, and added a cultural arm dedicated to promoting Italian and European artists in the U.S. After, Murray’s death in 1985, Isabella continued with the Foundation, opening an exhibition space in the Fuller Building in 1988 where for the next five years she organized exhibitions of Italian artists: Fontana, di Dominicis, Burri, Afro and Novelli, culminating in 1993 with exhibition “Roma New York 1948–1964” The Rayburn Foundation also sponsored numerous exhibitions of Italian art including the “The Italian Metamorphosis” at the Guggenheim in 1994, and the Morandi exhibition at the Tate in London.

Today, Isabella sells and buys art, adding to her extensive collection of Italian as well as American artists including an impressive number of female artists including Amer, Wangechi Mutu, Teresita Fernandez, Rina Banerjee, Mickalene Thomas, Paola Pivi, Hayv Kahraman. She also advises collectors through her own advisory company IDF Art Consultants. “I have a very good eye,” she says. “I really bought very well all my life; I bought very early paintings that became important. So, collectors trust my eye and they trust my taste and come to me for advice.” For more information about IDF contact Paulina Jakubowski at (212) 734–4919