There was a time when Berlin, Germany, clearly had an identity crisis. After World War II, and arguably for centuries prior, what was up was down, and what was down was up. For many, still, it is regarded as a place of darkness and mystery.

But curtains, iron or otherwise, have been torn open over the past three decades to reveal what is arguably the most interesting and attractive destination in Europe, one that is rooted in a positive vibe and a distinct identity: welcoming, tolerant, vibrant, beguiling, majestic, and, yes, charming.

But, for all the adjectives that describe Berlin, one stands above all others: intoxicating. From the regal Reichstag to the awe-inspiring Brandenburg Gate. From the somber Memorial to the Murdered Jews of Europe to the joyful cafés and bars of the Kreuzburg neighborhood. From the peaceful Tiergarten to the Brutalist remnants of Communist East Berlin. And, yes, there are still fragments of that infamous wall.

Here’s a tip:  Don’t even try to get an unattended grip on this vast city and its complicated history. A private walking tour — or two — is absolutely essential and money well spent. Plan this aspect of your trip in advance, and be sure to schedule it for your first day or two so you can keep a running list of the sites, attractions, museums, and monuments to which you’ll want to return. 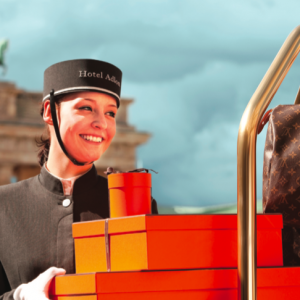 Here’s another tip:  there’s no need to spend hours laboring over which five-star hotel you should choose. The Hotel Adlon Kempinski Berlin, situated in Pariser Platz, a square at the end of Unterden Linden, has long been a bucket-list choice for luxury travelers, because it is a sensational property. It’s location notwithstanding, and we’ll get back to that, the Adlon Kempsinski drips of history and grandiosity.

It’s the hotel that inspired the famous 1932 film Grand Hotel . It’s the go-to lodging for royalty, heads of state, and celebrities (don’t hate us for pointing out that Michael Jackson infamously dangled his son Blanket from an Adlon balcony — but we digress).

And, like its Paris equivalents, The Ritz and Plaza Athénée, the Adlon Kempinski shows up in numerous books, movies, and other elements of pop culture.

The original Hotel Adlon was one of the most famous hotels in Europe. It opened in 1907 but was largely destroyed in 1945 in the closing days of World War II. After Berlin’s reunification in the early 1990s, the current property, which opened in 1997, is seemingly brand new, but clearly inspired by, if not modeled after, the original in all the best ways.

Today, the property is demurely nestled between the British and American embassies on the Unter den Linden, the main boulevard in the central Mittedistrict. The location is ideal as nearly every major Berlin attraction is within walking distance. However, it’s what’s in your line of sight that’s important here. Splurge for a west-facing room and be completely mesmerized by the city’s most magnificent attraction: the Brandenburg Gate. These rooms offer a kaleidoscope of views, not only of the gate during various phases of light (you may find yourself awestruck when the day ends and it is brilliantly illuminated), but also of those who gather to admire, proselytize, or celebrate at this 18-century monument. Yes, experiencing all this from your room is the best!

From the moment you arrive at the Adlon Kempinski, you are swept up in the European grand hotel realm. First, the staff are mind readers, and cater to your every whim. When they usher you inside, you will be at heart of the hotel, the Lobby Lounge & Bar.

Take some time to listen to the quiet splashing of the noble elephant fountain or the soothing tinkle of the grand piano and indulge in cocktails, tasty snacks, or treats from the patisserie. All adventures begin and end at this stately juncture, constantly festooned with gorgeous flowers and other flora.

You already have the 411 on room location, and while all are magnificent, a junior suite Brandenburg Gate is in order. Literally everything is exquisite. Ample storage, stately furnishings including plenty of space to spread out, exquisite linens, an enormous bathroom outfitted with a generous selection of Salvatore Ferragamo amenities, and a delicious selection of wines, spirits, snacks, and candies ensure that your decision to leave the room will be challenging.

When you do venture out, acclimate with a visit to the Adlon Spa by Resense. Regarded as Berlin’s greatest wellness haven, the spa invites guests to enjoy soul-nourishing treatments. Go all-in for one of several La Prairie facials (the Ultimate Pure Gold Radiance facial serves as welcome rejuvenation from your flight), or simply enjoy the pool and fitness center. No matter,  the spa is indeed an oasis of calm and comfort.

Steeped in complicated history, Berlin is a city that requires a little — OK, a lot! — of explanation. While a guide book will provide you with the basics, a guide will give you and your brain a true sense of accomplishment. Our pick is

Dennis Behnke, “The Berlin Storyteller.” Book Behnke’s six-hour walking tour, and pack a pair of sensible shoes for this illuminating journey through Berlin and its history.  www.private-tour.berlin

While there are a number of diverse restaurants and bars near the hotel, this neighborhood is second to many others in terms of variety and gastronomical appeal. Unless you choose to dine onsite, that is. For what is arguably Berlin’s best meal, book early for an unforgettable evening at the two Michelin-starred Lorenz Adlon Esszimmer.

In keeping with the cultural mosaic that is Berlin, the property’s other hot spot is Sra Bua, where the renowned chef Kai Weigand dishes up pan-Asian culinary perfection, Chinese culinary philosophy, Thai aromas, and European influences. Begin with a René (Champagne, jasmine, and pear). Don’t pass up the Greenland turbot, dressed with horseradish and black garlic. Finish your meal with a dessert of Itakuja chocolate, mango and rice – you’ll thank us.

Berlin, due to its complicated history and the still-tangible remnants of its 20th-century Communist partition, can be sobering. But it is truly a must for anyone who is a student of history. Hotel Adlon Kempinski is quite simply a must.