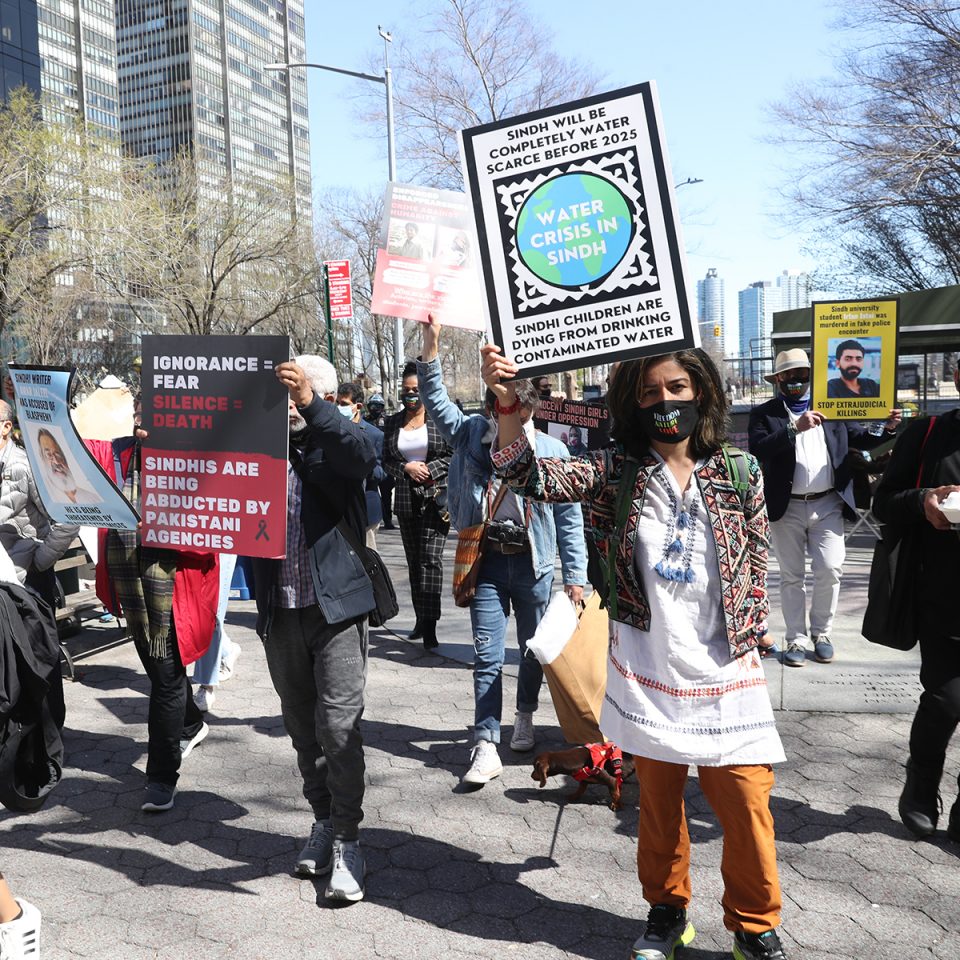 This April 2021, the Sindhi Foundation launched The Long Walk for Freedom, Nature, and Love, a 350-mile march starting just steps away from the United Nations Headquarters in New York City to the iconic Lincoln Memorial in Washington D.C. The objectives of the Long Walk are to spread awareness of the human rights and environmental injustices occurring regularly in Sindh, Pakistan, while also building bridges between the Sindhi people and other disenfranchised communities.

On their first event for the walk, Sindhi human rights activists met with American activists, politicians, and others to speak on the human rights violations happening in Sindh, and around the world. Sindhi Foundation member, Andrea Salas, kicked off the event, introducing the issues happening in Sindh; “The Sindhi people have suffered from grave human rights violations, including extrajudicial killings, forced conversions, enforced disappearances, censorship and torture. Sindhi activists, writers, teachers, and artists are silenced for speaking out against these atrocities… For the sake of the Sindhi people, we must not be silent.”

Sindhi-American Human Rights Activist, Fatima Gul, explored these issues in her speech, spotlighting the story of Sindhi school teacher, Notan Lal who was accused of blasphemy after reprimanding a student who told his father that the teacher had insulted the Prophet. “Notan Lal is just about to complete two years in prison for blasphemy. His family is struggling to understand what he did wrong. When children are sexually abused, the perpetrators are not brought to justice. But when there is an accusation of blasphemy, everyone has something to say.” Gul also said “this whole process of making the Long Walk a reality was brutal, but still not as brutal as all the atrocities against Sindhi people – not as brutal as the atrocities against children in Pakistan and Sindhi Hindu girls. Having that kind of perspective kept me going.”

Also commenting on the forced conversions of girls in Sindh, speaker Shankar Lakhawani stated, “It is an honor to speak for the voiceless Sindhi Hindu girls who are kidnapped, forcibly converted to Islam by Muslim men in Sindh. The kidnapping and conversion of Hindu and Sikh girls have been going on for decades.” Lakhawani also commented on the unfair treatment of religious minorities in Pakistan, which has led many to flee to India. “Hindus in Pakistan, in Sindh, are killed, for the non-payment of rents… or by people who are in search of their properties. Many of these Hindus have been moving, migrating, to India… They live in refugee camps in India, without the ability to claim asylum because India does not grant asylum like the U.S. does.”

Activist Anthony, “Tony,” Wright also attended the event and spoke about his own experience being wrongfully accused and convicted of a crime that he did not commit. It took twenty-three years for Tony to prove that he was not guilty of the murder and rape of an elderly woman, and another three years to be completely exonerated and released. He called out the importance of the Sindhi Foundation’s event, thanking Fatima Gul for inviting him. ” Thank you for helping inform myself and the world as a community of the atrocities happening not just here, where I’m from, but also in Pakistan, with the abductions of young girls and women in general. With a vision, we can do anything. Together, we can make it happen. We must unite our voices; we must emphasize our rights and we must stand up against injustice. Injustice anywhere is injustice everywhere.”

Candidate for mayor of New York City, Art Chang also attended the event, showing great support for the Long Walk movement. “Yours is a caravan of hope, founded on the strength of centuries of Sindhi culture, a culture founded on peace and inclusiveness of different religions, sects, and customs.” Chang also highlighted the significance of the walk during a time when hate crimes against Asian people have risen, stating “The Sindhi people are Asians, too. We share the experience of a diaspora. We have left our homelands in search of a better life, to belong. But these hate crimes try to tell us that we don’t belong… whoever needs to hear this, let me tell you: you belong here.”

Philanthropist Jean Shafiroff in her video contribution, added “I’ve learned about how unsafe it is to be pushed to be a minority in one’s homeland, especially a female one, in today’s Sindh. We need to speak up for vulnerable Sindhi and people in all places. “

Political strategist, J Bradford, continued the message of shared experiences, stating “The Sindhi Foundation is here to start their march to call out these issues that are not just relevant to the Sindhi people but are universal. How does humanity relate to the planet? This is something that is obviously of critical importance to the people of Sindh. It is also something that globally we all need to think about. It’s remarkable what the Sindhi Foundation has done to raise these issues.”

Former intern of the Sindhi-American Political Action Committee, Billy Hackett, commented on the significance of holding the first Long Walk event in front of the United Nations Headquarters. “The vision of the United Nations is that which we ask for today, and for the next three weeks… We see posters saying that we want equal leadership, we want a sustainable planet. We want a stop to violence. We want an end to poverty and a place that welcomes all women. These are the asks of the Sindhi Foundation. For a world of peace; a world free of injustice. These wants are not only wants, they are also things that all human beings deserve… They are attainable. They are real. We shall create that world working together.”

The final speaker of the event was Sufi Laghari, the executive director of the Sindhi Foundation. A survivor of enforced disappearance and torture, Laghari spoke of his passion for defending human rights. “Twenty-seven years ago, I came  to the United States of America, and I came here, to New York City…I walked every day here, thinking of my mother and father, and brother  and also my Sindhi people, and I promised to myself; One day I will represent my people of Sindh in the United Nations of America.” He ended the event with a statement of positivity that will follow the group on their 350-mile journey; “Most people don’t know about Sindh and the Sindhi people. What is their strength? what is their philosophy? their strength and philosophy is a message of love. That is why we carry the word love; we carry and spread this message from the Sindhi people to the world.”

In the coming days, the Sindhi Foundation will cross through New Jersey and Pennsylvania, hosting events in both states. These include:

Since the Long Walk for Freedom started, the Sindhi Foundation and their supporters have marched across New Jersey, meeting with local officials and concerned parties.  In the coming days the Long Walk will visit:

Further Destinations along The Long Walk include:

About the Sindhi Foundation:

Its goals are to strengthen and promote inter-racial, inter-religious, inter-faith, and inter-cultural harmony among Sindhis and the rest of the global community. There is also the need to bring a social change and promote openness and freedom of thought and expression among Sindhi people and Sindhi society, especially through empowerment of women, religious and sexual minorities, marginalized communities, and persecuted scholars, academics, civil society to retrieve original Sufi Sindhi discourse.